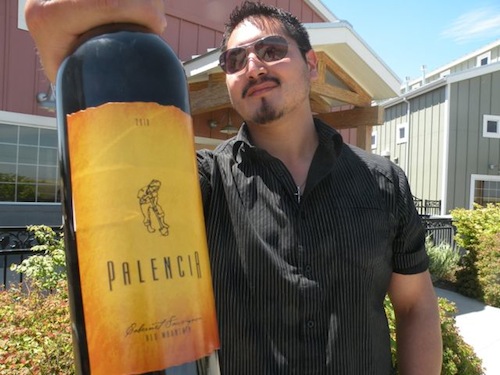 WALLA WALLA, Wash. – It’s been a decade since Victor Palencia first came to the Walla Walla Valley, a high school kid who was enchanted with the wine industry long before he could legally drink alcohol.

Palencia, 28, fondly recalls those early visits to Walla Walla, some 90 minutes east of his Yakima Valley hometown of Prosser.

“Stan Clarke gave me rides here,” he said. “I was skipping school to decide if I wanted to become a winemaker.”

Clarke, a legend in the Washington wine industry going back to the ’70s, was helping to run the Walla Walla Community College Center for Enology and Viticulture. He died in 2007.

Now Palencia is launching Palencia Wine Co. at the Walla Walla Regional Airport and is set to open in early September. Not far from his tasting room is the college’s Stan Clarke Vineyard, dedicated to Clarke’s memory.

Long road from Mexico to Washington

For Palencia, the road to Walla Walla was longer and harder than most.

He was born in 1985 in Michoacán, Mexico. Two years later, his parents brought the family to the United States, crossing the border illegally.

“I can remember my dad holding me as we crossed a river,” Palencia said. “It wasn’t right, but it was out of necessity.”

Thanks to the Reagan amnesty program, Palencia, his siblings and parents gained U.S. citizenship. Since then, he has made the most of the American dream.

His mother stayed home to take care of the family’s eight children, though she often took jobs as a seasonal worker. His father toiled in the mint fields, orchards and vineyards of the Yakima Valley.

“It’s the best upbringing I could have had,” Palencia said. “My best memories are of getting up early with Dad to help in the mint fields.”

From high school to winemaking

After graduating from Prosser High School in 2003, Palencia was the first in his family to go to college, earning a degree at Walla Walla Community College. A scholarship from Leonetti Cellar helped him pay his way through school, and plenty of top winemakers in the Walla Walla Valley gave him a chance, including Richard Funk at Saviah Cellars and Trey Busch of Sleight of Hand Cellars, then head winemaker at Basel Cellars.

“The wine community in Walla Walla was very welcoming,” Palencia told Great Northwest Wine. “I felt right at home. The networking and cooperation are great in Walla Walla. It is a fun, fun area. Everybody is sharing a common interest.”

When he graduated in 2005, Palencia helped at Zerba Cellars, then moved back to Prosser to work as a winemaker for Willow Crest Winery.

He still wasn’t 21 years old and, thus, could not legally taste what he was making. A feature story about the underaged winemaker landed Palencia in The New York Times, right next to a column about celebrity chef Rachael Ray.

“I had a big crush on Rachael Ray,” Palencia said. “But she never called me,” he added, somewhat crestfallen.

Palencia worked at Willow Crest for more than two years. After a brief stint at Apex Cellars in Prosser, he was hired as director of winemaking at J&S Crushing in Mattawa, a custom-crush facility that now produces more than 1 million cases of wine annually. J&S is a partnership between Jack Jones and Dick Shaw. Part of the operation is Jones of Washington, a winery with a tasting room in the Columbia Basin town of Quincy.

Since his arrival at Jones, Palencia’s talents as a winemaker have been on display, with his reds, whites and pinks winning top awards and praise from wine critics nationwide. The job also gives him access to top estate vineyards on the Wahluke Slope, Ancient Lakes of Columbia Valley and Red Mountain.

In 2012, Wine Press Northwest magazine honored Jones as its Washington Winery of the Year, primarily on the strength of Palencia’s winemaking talent. 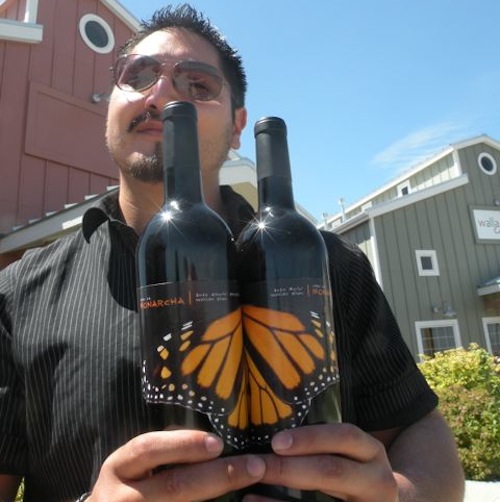 Now, he is coming full circle, returning to his winemaking roots while remaining in charge of J&S Crushing and Jones of Washington. Palencia Wine Co. wines will be made primarily at J&S in Mattawa, where it will be a custom-crush client. This helps Palencia keep his overhead low because he won’t need to purchase a lot of equipment.

The initial case production will be about 350 cases under two labels.

“One of the biggest challenges – like any small company – is upfront capital to bottle a lot of wine,” said Palencia, who plans to increase production to 1,500 cases next year.

His upper-tier label will be Palencia Winery, which has a line drawing of his father digging with a shovel. The initial release includes a Cabernet Sauvignon from Red Mountain and a Sauvignon Blanc from the Yakima Valley.

His everyday tier is called Monarcha, and it shows the wing of a monarch butterfly. This has special meaning to Palencia because the monarch starts in Michoacán and migrates north as far as Canada. Some wines have a monarch’s left wing, and some have a right wing. When put together, they form the entire butterfly.

Under Monarcha, Palencia has a Chardonnay, an off-dry Pinot Noir rosé, a Merlot-based blend and a Cab-based blend. All will retail for $14. 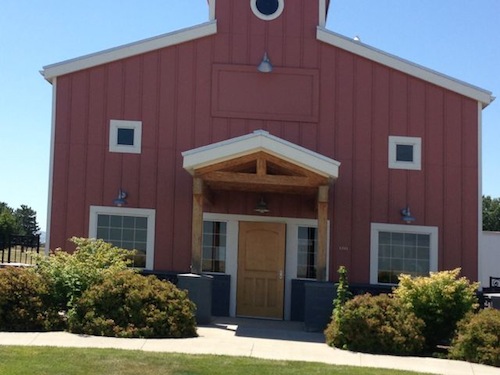 Palencia Wine Co. is in an incubator building at the Walla Walla Regional Airport. (Photo by Niranjana Perdue/Special to Great Northwest Wine)

Palencia is occupying one of five incubator buildings on the east side of the airport. His neighbors include Kontos Cellars, Walla Faces, Corvus Cellars and CAVU Cellars. The latter is relocating soon, and a microbrewery is said to be moving into the space.

Palencia now lives in Richland, the midway point between Mattawa and Walla Walla, giving him an hour-long commute depending on which way he will go. Most of his driving will be to and from Mattawa, as he will focus his efforts on J&S while Paula Ramirez will run the Walla Walla location as the winery’s director of sales and marketing.

Though the building is 1,500 square feet in size, it seems rather small to Palencia, who is used to much larger spaces at J&S.

“It’s a small place with big dreams,” he said.

So far, Palencia’s hard work and talent are helping his dreams come true. Not bad for a guy whose 10-year high school reunion is this summer.