PORTLAND – The Oregon wine and travel industry are teaming up with Alaska Airlines to give Oregon wines a free ride home.

Beginning Sept. 10, Alaska will launch its “Oregon Wines Fly Free” program, in which up to a case of wine can be checked at no charge when leaving airports in Portland, Eugene, Medford, Redmond and Walla Walla.

“And, it doesn’t have to be a case from one winery,” Michelle Kaufmann, Oregon Wine Board assistant communications manager, told Great Northwest Wine. “It could be a mixed case from each of the producers the passenger visited on their trip.”

This is similar to a program launched a year ago called “Washington Wine Country Taste and Tote.” It provides a similar service for any flights leaving from Pasco, Walla Walla and Yakima.

The Oregon program ends Nov. 20. Washington’s Taste and Tote program will last through at least 2014. 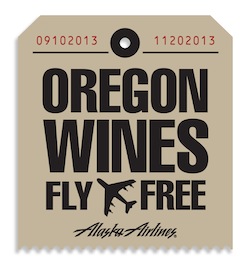 “Partnering with Alaska Airlines and Travel Oregon to help visitors to Oregon experience the beauty and bounty of our amazing wine country is a no-brainer,” said Tom Danowski, executive director of the Oregon Wine Board in Portland. “Increasingly, the customers of Oregon wine are the same customers being courted by Alaska Airlines and Travel Oregon.”

Clint Ostler with Alaska Airlines said the company is dedicated to developing the markets it serves.

“We’re pleased to support Oregon wineries while giving our customers one more reason to visit the state’s incredible wine regions,” he said.

Todd Davidson, CEO of Travel Oregon, said visitors to Oregon are inspired by the state’s scenic beauty to buy artisan and agricultural products.

“We know from a recent study that at least 43 percent of Oregon visitors said they are more likely to purchase Oregon products than before their trip,” he said. “Now, they can bring home not only memories but Oregon’s award-winning wines as well.”