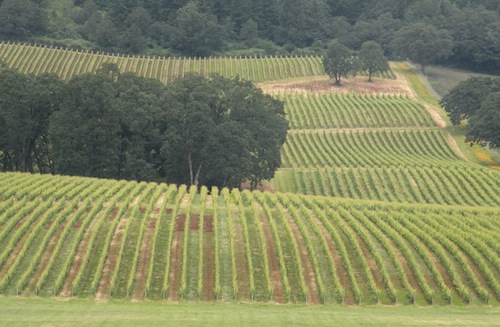 Stoller Vineyards in the Dundee Hills near Dayton, Ore., is starting to go through veraison during this warm vintage. (Photo by Andy Perdue/Great Northwest Wine)

DUNDEE, Ore. – Winemakers in the heart of Oregon wine country are preparing for a smaller-than-usual crop, though they are pleased with the quality and progress of what they have.

“The speculation is that it’s going to be down as much as 10 to 20 percent,” said Joe Dobbes, longtime Oregon winemaker and owner of Dobbes Family Estate and Wine by Joe in Dundee, a town in the northern Willamette Valley.

Dobbes and other Willamette Valley winemakers said inclement weather during bloom has caused clusters to be lighter than usual with grapes known as “hens and chicks” – that is, berries of different sizes on the same cluster. This has several wineries scrambling to find more grapes, he said.

Melissa Burr, winemaker at Stoller Family Estate near Dayton, Ore., said hail and rain came through the Willamette Valley during bloom, when the clusters flower, self-pollinate and begin to form fruit.

“Some of our sections are naturally cropping a lot lower,” she said, “as little as 2.5 tons per acre.”

She said clusters of Pinot Noir weigh about 90 grams rather than the usual 120 grams. Growers who leave a little more crop on their vines should see a normal harvest, she said. 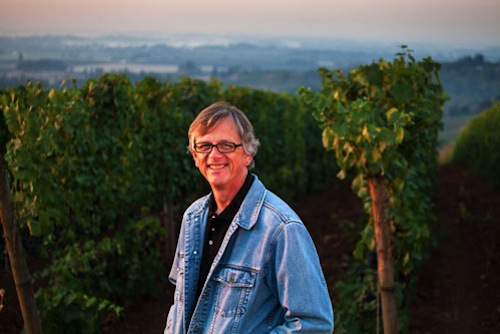 Gary Horner, winemaker at Erath Winery, said the size and quality this year depends on when Willamette Valley vineyards went through bloom.

“Warmer sites started bloom around June 3, and they just rocketed through,” he said.

But cooler sites at higher elevation were more affected by rains. Horner added that in most years, Pinot Noir vines average 1.7 clusters per shoot, but this year they are averaging 1.3 to 1.4 clusters per shoot.

“I think we might be in for a surprise on the low side,” he said.

Rollin Soles, longtime winemaker at Argyle Winery in Dundee who now focuses primarily on ROCO, his own winery near Newberg, said precipitation this year in the Willamette Valley must be close to a record low, and that has led to a warm, dry vintage (except for the rains during bloom).

“We’re seeing a fair bit of water stress (in Willamette Valley vineyards) at the moment,” he said.

Soles added that he’s heard of growers talking about how much earlier the crop is this year, but he believes it’s actually right on schedule, based on the long-term averages.

“We’ve had so many late growing seasons in a row, we’ve kind of forgotten what normal is,” he said. 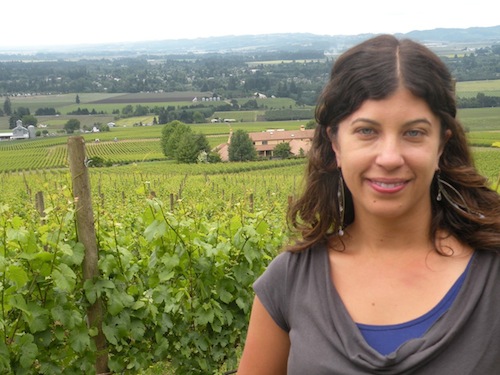 Melissa Burr is the winemaker at Stoller Family Estate in Oregon’s Dundee Hills near Dayton. She is beginning to see veraison in her vineyard and expects to begin harvest around Sept. 10, if current trends continue. (Photo by Andy Perdue/Great Northwest Wine)

Dobbes said he’s heard about a bit of veraison showing up in vineyards throughout the Willamette Valley, though he hasn’t seen any in his vineyard. Burr confirmed she has veraison in some of her younger blocks of vines.

Veraison is a French term for “change” and describes when grapes turn from green to yellow or red. In the Willamette Valley, this typically occurs around Aug. 12, so everything is setting up to be a bit early.

Horner said this year reminds him of 2003, when harvest began around Sept. 10 in the Willamette Valley. That’s the date Burr is targeting for a start of harvest if everything continues they way it has so far.

“It’s looking like a pretty stellar vintage,” Burr said. “I was supposed to be out of town the first week of September, but I’m not doing that now.”

Dobbes believes he could be picking Pinot Gris and Pinot Noir from Southern Oregon as early as Sept. 7. Soles said he could begin harvest for sparkling wine by mid-September and for still wines around Oct. 1. 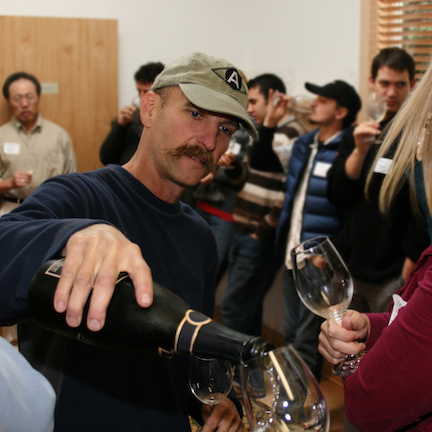 Rollin Soles is the owner of ROCO near Newberg, Ore., and was the longtime winemaker at Argyle Winery in Dundee. (Photo courtesy of Argyle Winery)

But with about six weeks left to the beginning of crush, Mother Nature is still in charge.

“They are predicting warm and dry conditions,” Horner said. “But that can totally reverse, as we’ve all seen.”

Soles painfully recalls two vintages that also were supposed to be superb.

“We were set up pretty well in ’95 and ’97 and got dumped on by inches of rain,” Soles warned. “I don’t want to be too positive. I don’t want to say too much. It’s all about the weather in September.”