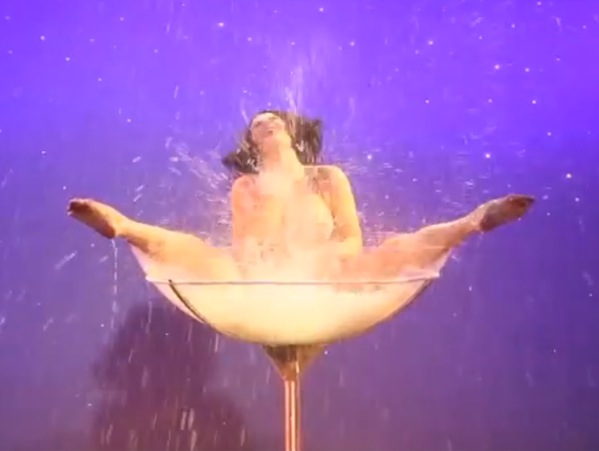 Burlesco DiVino, a production by Lily Verlaine and Jasper McCann, will be performed Aug. 21-24 at The Triple Door in Seattle.

SEATTLE – Wild Ginger has been at the forefront of a number of delicious West Coast trends, so it makes sense for company wine director Cortney Lease to be leading another movement – pairing wine with burlesque.

Restaurant owners Rick and Ann Yoder also operate The Triple Door, a dinner theater and lounge next door to their Asian restaurant and satay bar. And later this month, they are bringing back Burlesco DiVino, a production by Lily Verlaine and Jasper McCann that runs nightly Aug. 21-24

“It’s called Wine in Rome, but it’s centered around Riesling,” Lease told Great Northwest Wine. “It’s a burlesque show dedicated to the vinification of grapes and all our happy consumptions around it. It’s a lot of fun. I really enjoyed it last year, and I’m curious to see what’s going to happen this year.”

Lease’s wine list is serious business. She’s rapidly become one of the Pacific Northwest’s most acclaimed sommeliers, and her array of offerings recently delivered the restaurant its fifth Grand Award from Wine Spectator. The famed Canlis is the only other restaurant in the state to receive the publication’s top honor.

Considering her background, this all fits for Lease, who began working for the Yoders while she was at the University of Washington working on her chemistry degree. It wasn’t until she decided to study in Cambridge, England, that the world of wine became her passion. 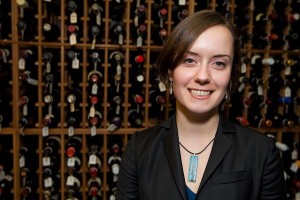 Cortney Lease, who graduated from the University of Washington with a chemistry degree, is company wine director for Seattle-based Wild Ginger. (Photo courtesy of Wild Ginger)

“In 2005, I graduated and said, ‘You know, I think I speak the language pretty well. so let’s give it a try,” Lease said. “I got a student working visa. One of the only jobs I could get was in a pub as a pub tender and working in a wine shop called Oddbins as a wine adviser. I’d already gotten a small grasp of wine and love for it from my experience at the Triple Door as a cocktailer and server. I fell in love with it times 20.”

Oddbins has outlets throughout the United Kingdom, and working for the retailer gave her a different outlook at the wine trade and the drinking public.

“I would say the British consumer was a lot more casual in their consumption of wine, a lot more conversational and maybe a little bit more educated in a certain sense,” Lease said. “The British have been picking and choosing the wine trends of the world for many years. I don’t know that you’d say that is quite as much the case today, but they are a very strong influence on the world of wine and consumers of wine.”

Wine also is a part of the culture in England.

“They are interested in new wines and new regions,” Lease said. “They are adventurous in the way that they drink, and I think they are comfortable with opening a bottle of wine and relaxing. Also they can drink outdoors, which helps. They can go out in a park or garden and not have to worry (about breaking a law).”

That culture inspired Lease to dedicate herself to the wine trade.

“I found that I have a moderate palate that, of course, I’m always working on, and I ended up doing the Wine & Spirit Education Trust in Cambridge and in London,” she said. “I took the intermediate and the advanced WSET over there, came back and saw an opportunity to come back to the restaurant that gave me my start, Wild Ginger and Triple Door.”

The Yoders gave her the cellarmaster position in 2007, and it’s been a steady climb since. When they opened Wild Ginger at The Bravern in Bellevue, Lease was promoted to company cellarmaster. In 2010, she became wine director for the Seattle properties. A year later, she took over the entire portfolio. 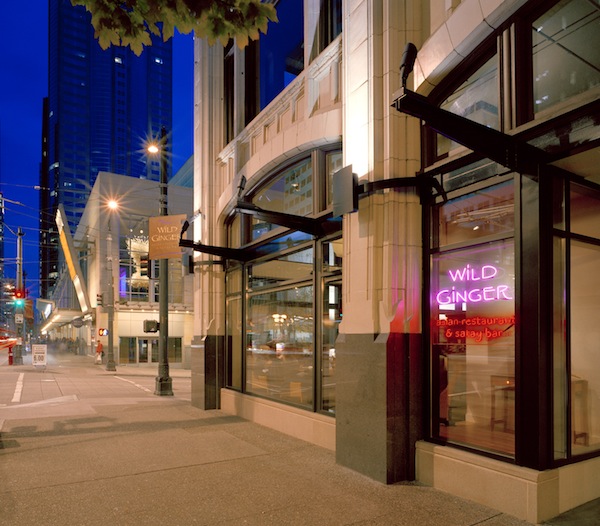 Wild Ginger Asian Restaurant and Satay Bar in Seattle will celebrate its 25th anniversary in 2014. (Photo courtesy of Wild Ginger)

“Rick and Ann took a trip through Southeast Asia while in college and fell in love with the cuisines and the culture, and they ended up getting a head chef who is from Cambodia,” Lease said. “We do individual traditional dishes with a modern twist – Cambodian, Malaysian, Thai, Vietnamese, Chinese, Burmese. We have a huge selection of these dishes.”

And Lease is in charge of a wine program that offers more than 2,000 wines and 45,000 bottles, many of them in storage throughout the city.

Riesling is a particular focus with more than 250 on her list, and Wild Ginger quickly embraced the Summer of Riesling restaurant promotion that began in New York. Lease served as a panelist during this year’s Riesling Rendezvous.

“I think now there’s a growing understanding that Riesling doesn’t have to be sweet,” Lease said. “That’s the initial concern for guests who say, ‘I don’t want sweet wine, and Riesling is sweet.’ Well, not necessarily. In fact, most Riesling is quite dry.

“General interest is rising, and of course it’s such a diverse grape,” she added. “If someone enjoys white wine, they can find a wine that will suit them.”

Lease continues to educate herself, pursuing the title of Master Sommelier, while the restaurant and wine become more tightly woven into of the fabric of her life. A server, David, recently became her husband, who now handles Seattle-area sales for áMaurice Cellars. They were married at the Walla Walla winery on Vineyard Lane.

And don’t be surprised if Lease someday puts that chemistry degree to work and follows the path of Greg Harrington, the winemaking master sommelier who launched Gramercy Cellars in Walla Walla.

In the meantime, there’s good reason why Lease seems particularly fond of Burlesco DiVino and looks forward to watching Verlaine — who recently was voted Best Burlesque Dancer by Seattle Weekly readers — and some of The Atomic Bombshells joining the show. That’s because Lease’s course work at Montlake included a minor in dance.

“When I first approached them about doing Burlesco DiVino, their response was, ‘It’s about time!” she said with a smile.