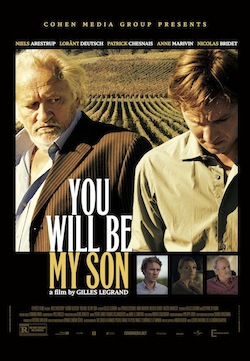 A new film set in a Saint-Emilion winery and vineyard pits an overbearing father and demanding winemaker against his son, who works for him.

The French language film You Will Be My Son comes out this Friday. It stars Niels Aretrup as Paul de Marseul, an exacting winemaker who does not see the same passion in his son, Martin, portrayed by Loran Deutsch, even though Martin is a trained winemaker.

The plot thickens when Philippe, the son of his cancer-riddled estate manager, comes home to take care of his dying father, and de Marseul sees the passion and talent he wishes his own son had.

Will the father turn his back on his son and instead give his estate to Philippe?

The film is from Cohen Media Group.

See if this film will be showing at a location near you.