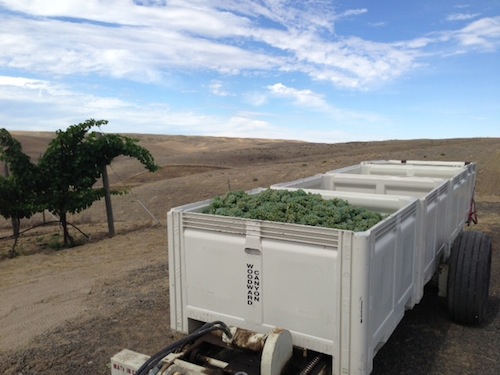 Washington’s wine grape harvest is just getting started, with wineries bringing in a little Sauvignon Blanc and Pinot Gris so far.

“We’ve just been kind of nibbling,” he said.

The company was going to pick Monday, too, but held off because of rain over the weekend. Corliss said he probably would bring in some Pinot Gris next week, and he would not be surprised if he saw some Syrah being harvested late next week.

“We’re getting close on a few reds,” he told Great Northwest Wine, adding he would not be surprised if he brought in a bit of Dolcetto late next week.

Lake Chelan still at least a week away

Katy Perry, owner and winemaker at Tildio Winery on the north shore of Lake Chelan, said the region dodged a hailstorm Thursday. She said that even though most of her grapes are through veraison, she is at least a week to 10 days away from picking her first grapes.

“I’ve seen apples being picked,” she said, “which is a clear indication we’re close.”

Grapes being harvested on Red Mountain 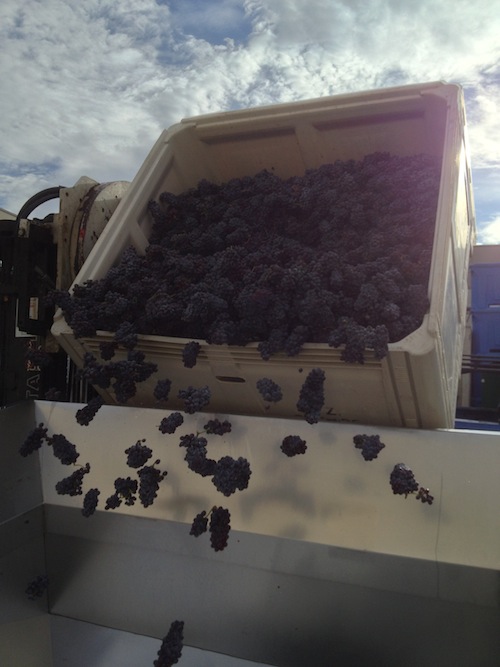 Scott Williams, winemaker at Kiona Vineyards & Winery on Red Mountain, has not picked any grapes yet.

“We’re just madly trying to get ready,” he said.

He said Merlot and Lemberger are getting close, as are Gewürztraminer and Chardonnay. He thinks he will pick Syrah in about two weeks.

Just up Sunset Road at Fidelitas Wines, winemaker Charlie Hoppes brought in a bit of Sauvignon Blanc from nearby Klipsun Vineyards.

Hoppes said he expects to pick some Merlot from Red Mountain next week, and there’s even a possibility of a small amount of Cabernet Sauvignon coming in from new plantings. He said Merlot is at 24 brix, which is an optimal sugar level for picking.

“It doesn’t taste ready, but by next week, it should be ready to roll,” he said.

Scott Greenberg, owner and winemaker at Convergence Zone Cellars in Woodinville, brought in Pinot Gris from Ciel du Cheval on Red Mountain. He received about two tons of grapes, enough for 125 cases.

Wade Wolfe of Thurston Wolfe said he has not heard of any harvesting yet in the Yakima Valley, though he believes some Sauvignon Blanc could be picked in the next week or so. He was looking at Orange Muscat at Lonesome Spring Ranch near Benton City and likely will bring in some Grenache from Spice Cabinet, a vineyard owned by the Mercer family in the southern Horse Heaven Hills. He thinks he will harvest that in the next 10 to 14 days.

Wolfe said the warm weather will likely mean lower acidity in wines than in the past three years.

Wolfe said the thunderstorm last weekend did not cause any vineyard damage.

“It settled the dust a little,” he said. “We needed the rain.”

He said he drove past a hopyard in the Yakima Valley that had been flattened by the weekend windstorm.

“I’m sure the hop growers don’t want to see any more rain,” he said.