ASHLAND, Ore. – Greg Jones, one of the wine world’s top climatologists, reported that growing degree-day accumulation through Aug. 31 ranged from 17 to 30 days earlier than average in four major regions for Oregon vineyards.

“In other words, we would not expect to reach these growing degree-day numbers until the third week to the end of September,” the University of Southern Oregon professor wrote in the latest update he distributed Tuesday to the wine industry from his Ashland office.

The heat unit totals for the four areas Jones highlighted in his report ranged from 14 to 22 percent higher than the 30-year average of 1981 to 2010. 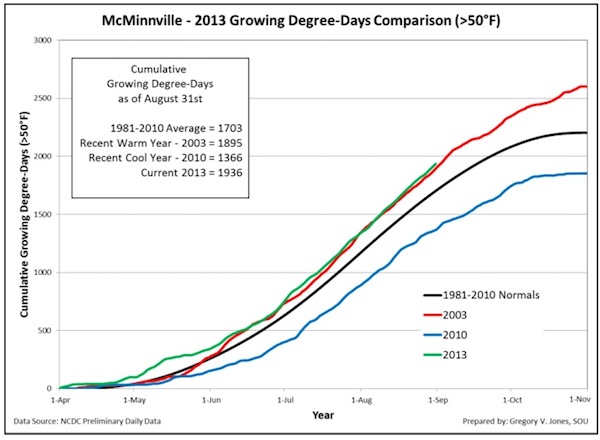 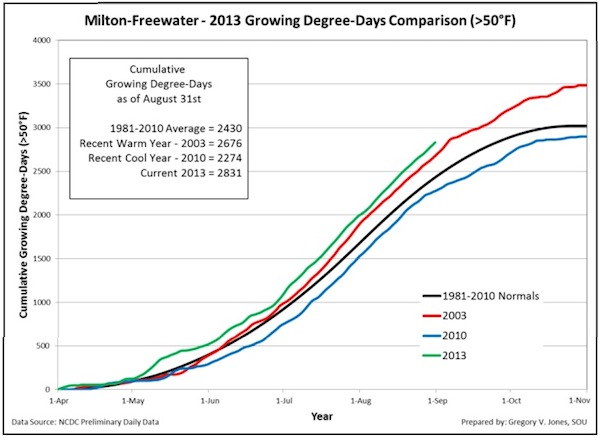 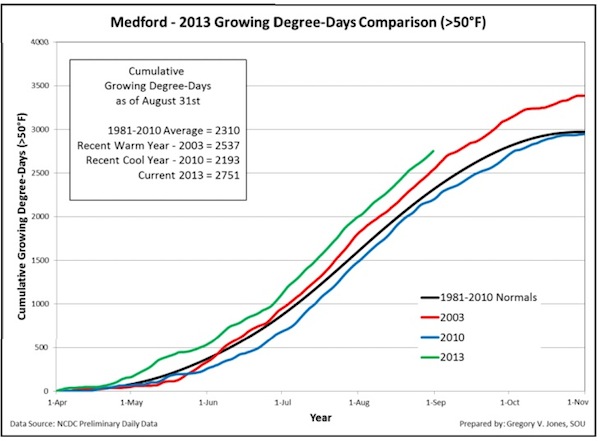 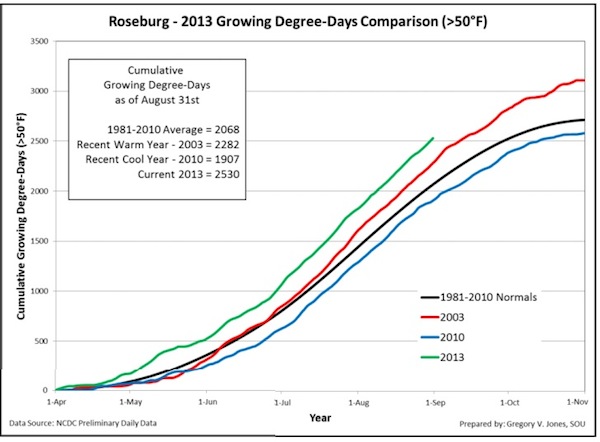 “For those in Oregon, our August growing degree-day numbers have continued their above-normal trend, running 10-23 percent above the average of the last 10 years, while year to date precipitation is down 42-50 percent,” Jones wrote. “Plant growth is ahead of normal with growing degree-day accumulations on Aug. 31st being reached 17 to 30 days earlier than normal.”

Precipitation is not a major factor throughout most of the Pacific Northwest wine industry because of drip irrigation, however there are some plantings in the Willamette Valley – including famed Pinot Noir site Shea Vineyard – that are dry-farmed.

“August 2013 continued the general conditions of a warm and dry western U.S. and cooler and wetter eastern U.S.,” Jones wrote. ” … warmer than normal conditions were seen in the Central Coast and throughout most of the western valleys of Oregon and most of eastern Washington (up to 3.2°F above normal).

“While cloud cover from the cut-off lows produced cooler than normal conditions over portions of California and Oregon, the path of moisture surplus was limited to the Sierra Nevadas, extreme northwest California and southern Oregon, and the Cascades all the way into Washington,” Jones continued. “Many locations in these regions saw record breaking August rainfall amounts from one to three isolated events. While the systems did spawn some dry lightning that initiated fires, the rain and slightly cooler conditions helped slow down many of the long running and larger fires.”

That helps explain why the Climate Prediction Center indicates more of the same in September.

“The current CPC short-term forecasts (6-10 and 8-14 days) through the end of the second week in September are pointing to a greater than normal chance for warmer and drier conditions over the western US,” Jones reported. “The current trough and closed low off Oregon and Washington will move inland and then eastward by Thursday/Friday bringing a slight chance of rain to western locations southward into California and potential thunderstorms to eastern Washington.

“Afterwards conditions are expected to warm to mid-80s into mid-90s and even into the 100s in the normally warmest locations,” he continued. “The 30-day forecast is currently showing a good chance for warmer than normal conditions across most of the west, but equal chance for normal to cool conditions right along the coast from southern Oregon to southern California.”