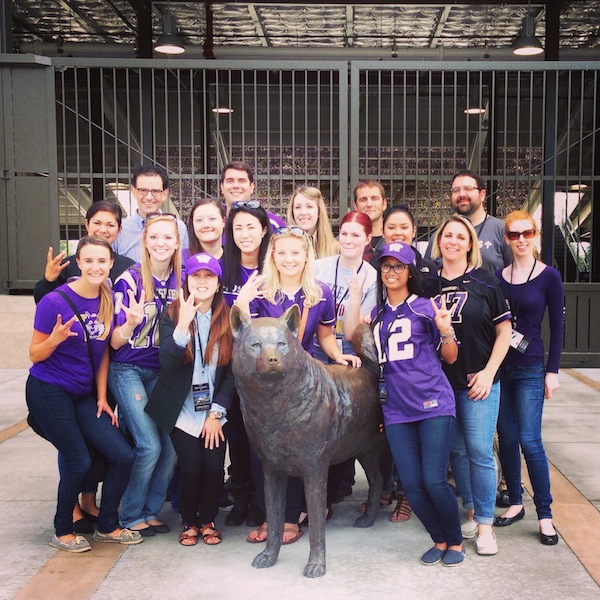 Members of Precept Wine’s team got a sneak peek at the remodeled Husky Stadium earlier this summer. The Seattle-based company is dominated by University of Washington grads, including CEO Andrew Browne, back left, who negotiated a sponsorship agreement with his alma mater. (Photo courtesy of Precept Wine)

The Pacific-12 Conference school now permits the sale of adult beverages in certain areas of the stadium, but vintners have former NFL quarterback Damon Huard and athletic director Scott Woodward to thank for pairing their wines with Husky football.

“It really was a lot of fun,” Huard told Great Northwest Wine via email. “Scott Woodward and I are big cork dorks, and before I left my role as a major gifts officer in the athletic department to come work as the chief administrative officer for football, Scott gave me one last task of putting together a wine list for our premium sections in the new stadium.

“The only criteria Scott gave me was to make sure the winery has some sort of Husky ties,” Huard continued. “As you can see from our rockstar list, we have a number of amazing wineries that have a strong connection to the University of Washington.” 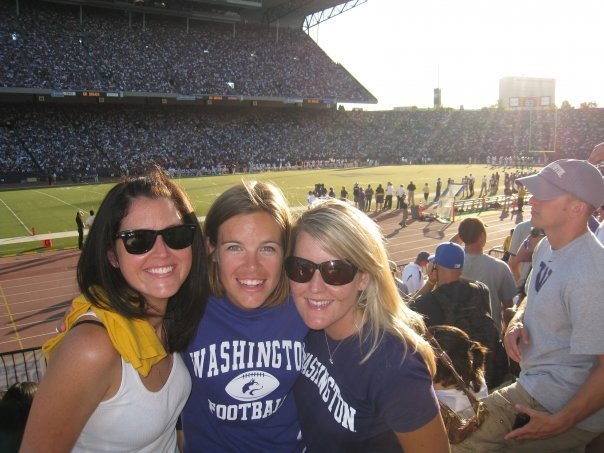 àMaurice Cellars winemaker Anna Schafer, left, is one of several University of Washington grads to have wines poured at Husky Stadium. (Photo courtesy of Anna Schafer)

One of those is àMaurice Cellars. Anna Schafer, who gradated from the University of Washington in 2002, makes the wine for her award-winning boutique winery in Walla Walla.

“Scott Woodward, I sell him a ton of wine,” Schafer chuckled. “Damon called and asked if I’d be willing to sell them a few cases of Viognier for the stadium. It was great to be able to do that. Scott’s a huge Washington wine lover, and he’s really good friends with Rob Newsom of Boudreaux Cellars (in Leavenworth). They’re both from Louisiana.”

Husky Stadium, originally built in 1920, received a facelift in 1987 but had fallen into disrepair. So the school spent $280 million, relying on private funds to modernize one of college football’s most respected venues.

To help generate revenue, school officials agreed to permit the sale of alcoholic beverages in limited areas such as Club Husky, the Don James Center, the suite level, the press level sky suites, football operations and the northwest and southwest viewing decks.

“That was a game-changer,” said Alexandra Evans, chief marketing officer for Precept Wine, and the Seattle-based group seized this chance to enter a partnership with the school.

“Dan Baty and Andrew Browne, the owners and founders of Precept, are also proud Washington Huskies,” Evans said. “This is very exciting for us, and we’re proud of the collective effort of being involved with Husky Stadium.”

Just outside Husky Stadium, The Zone features a tailgate-type area with catered foods and where Waterbrook’s Cabernet Sauvignon, Merlot and Chardonnay are the only wines available. Waterbrook wines also are exclusively served for all catering events in the stadium’s suite and club levels. The Don James Center includes not only Waterbrook but also three other Precept brands – Apex Cellars, Browne Family and Canoe Ridge.

Evans declined to give details of agreement with the school other than saying, “We have the option to re-up and make it a longer-term contract.”

Lazy River offers a twist because the Lumpkins’ winery is in Yamhill, Ore. They are beaming to have their 2009 Pinot Noir poured at Husky Stadium, and their ties are deeper than some, having sent three children to their alma mater.

Another UW grad, Ross Andrew Mickel of Ross Andrew Winery, recently entered a partnership with Precept, and two of his wines also are available at Husky Stadium.

Schafer referenced the “Dawg Deals” section of the University of Washington Alumni Association website and said she loves to meet fellow Huskies and provide them a discount.

And Evans, UW Class of ’99, knows it doesn’t hurt to have your wines and your brand in the proximity of 70,138 people on game day.

“Husky football has been a big event for my husband’s family, who are long-time tailgaters,” Evans said. “We’ve always served Waterbrook wines in the parking lot in those red Solo cups, but it was really exciting to see Waterbrook inside the stadium. They are well-priced wines and give people another thing to enjoy on a football Saturday.”

Ironically, it took a Pro Football Hall of Fame quarterback to teach Huard how to appreciate Washington wines.

Huard, 40, who spent 13 season in the NFL after setting passing records at UW, has roots in wine country. He was born in Yakima, and his father, Mike, was a three-sport star at Prosser High School before moving to Puyallup and becoming one of the state’s top high school football coaches.

“My interest came from Dan Marino who was my former teammate in Miami,” Huard said. “When I was a 23-year-old rookie, Dan would have me over at his house and pour these great Washington wines that I had to go 3,000 miles from home to learn about. I remember him pouring Andrew Will, Quilceda Creek and Woodward Canyon. I really grew a strong passion for wine over the course of my four years with Dan.

“I then moved on to New England where Drew Bledsoe and I would continue to pour Washington wines for our teammates and always talked about getting involved in the Washington wine industry one day when we retired,” Huard added. “Drew has obviously hit a home run with Doubleback.”

The demands of a winemaker during fall crush makes it nearly impossible for Schafer, who grew up on Mercer Island, to cheer on the Huskies in person during football season.

“All my friends have given up on me, so I didn’t even get invited to the game,” she said.

Now she’s thirsting for the chance to sit in the new stadium of her beloved college, enjoy a glass of Viognier and watch her wine being served to fellow Huskies.

“We’ll see if the grapes will let me, but I’m planning on going to the University of Oregon game,” Schafer said. “My brother’s a Duck, which is almost worse than if he was Cougar.”