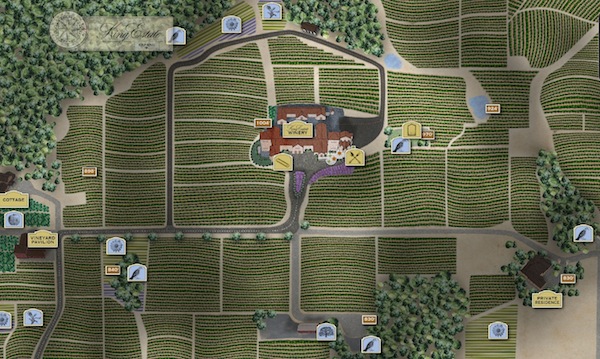 King Estate Winery has installed a series of raptor boxes and perches throughout its 1,033-acre organic estate. (Map courtesy of King Estate)

EUGENE, Ore. – King Estate Winery has been a leader in the Pacific Northwest for sustainable practices, and some of its best farming tools are perched in the raptor boxes scattered throughout the 1,033-acre property.

This year marks the fifth anniversary of the iconic Northwest winery’s partnership with the Cascades Raptor Center, and on Oct. 5, it will stage its third annual benefit dinner for the Eugene nonprofit.

There’s no doubt the raptors help King Estate with its bottom line, and not just by picking off moles, voles, mice and squirrels throughout the property, which is certified organic.

In 2010, vineyards throughout Oregon suffered huge crop losses to migratory birds. In the Willamette Valley, there were reports of hungry birds plucking 50 percent of the vinifera grapes because the late harvest wine grape harvest came on the heels of poor season for wild blackberries.

The Migratory Bird Treaty Act makes it illegal for humans to kill many of those scavenging birds. Those same laws don’t apply to raptors, who view cedar waxwings and flying vermin such as starlings as food sources.

Two years earlier, King Estate launched its raptor program as part of its organic pest control. The Cascade Raptor Center takes in injured and orphaned birds such as hawks, kestrels and owls and rehabilitates them.

Ideally, the raptor center re-introduces the birds into the habitat where they came from. In cases when the bird’s home cannot be determined, they often are released at King Estate, where they’ve found homes in raptor boxes and trees throughout the vineyard and the surrounding property. King Estate has taken an additional step of creating predator perches.

There are several benefits to releasing the birds at King Estate. One is the Cascade Raptor Center knows the food source for these transplanted birds is organic because pesticides are not used there. The property also provides a diverse habitat that includes grasslands and forests.

In 2008, Cascades Raptor Center staged its first public seminar at King Estate with three birds from its program. The event, which drew 200 people, was highlighted by the release of a red-tailed hawk at King Estate. The next year, the winery installed eight boxes for kestrels and owls throughout the estate.

The partnership has produced many success stories, and from April through October, the Cascades Raptor Center is open to the public six days a week (closed Mondays).

Anyone who has visited King Estate knows the culinary team creates remarkable meals for the public on a daily basis. Here’s a copy of the menu for the Oct. 5 dinner.