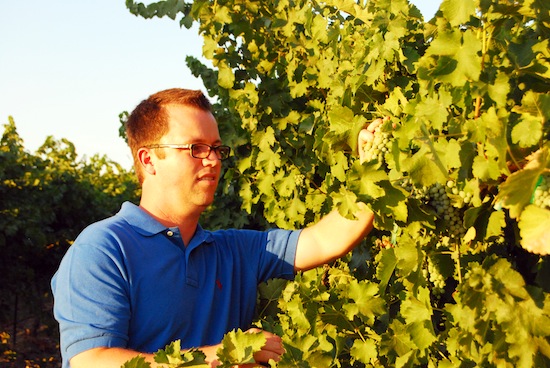 Marcus Miller makes the wine at Airfield Estates, his parent’s winery in Prosser, Wash. Next month, Walla Walla Community College will honor Miller and three other graduates of the school’s winemaking program. (Photo by Elly Anderson/Courtesy of Airfield Estates)

WALLA WALLA, Wash. – The timing could be better, but Yakima Valley winemaker Marcus Miller looks forward to taking a break from harvest next month to visit with some of his college chums.

They won’t be gathering at their alma mater for a football game. Instead, Miller, three other Northwest winemakers and two chefs will receive awards Oct. 12 during Entwine 2013, the annual fundraising event for Walla Walla Community College’s wine and culinary programs.

“It’s going to be pretty fun,” said Miller, who makes the wine for his family at Airfield Estates in Prosser. “I really enjoyed my time at Walla Walla. It was too short, though, because I went through the program in nine months. It was really fun to be immersed in the wine industry, and I made a lot of friends with winemakers.”

Each year, Entwine combines a wine reception, dinner and auction to raise scholarship funds while recognizing outstanding graduates of WWCC’s award-winning programs. The event will be at the Dietrich Dome on the WWCC campus, and Miller hopes to catch up with classmates such as Victor Palencia of Palencia Wine Co., and Noah Fox Reed of Watermill Winery in Milton-Freewater, Ore.

“I already had my undergraduate degree and my MBA, so this was my third go-round at college,” Miller said. “It was an interesting mix of people in the program. I was 24 at the time, and then you had someone like Victor who was 18 and going through his first stint in college. Noah was 22 and just out of college. And then you had those who were starting their second careers – people in their 40s and 50s who decided to leave corporate world and follow their passion for wine.”

“I was super-green about the wine industry,” Miller said. “I learned so much in those nine months.”

The program was created by longtime educator Myles Anderson, co-owner of Walla Walla Vintners, and was nurtured by enologist Mike Moyer and the late Stan Clarke, who headed up the viticulture department.

“I played a lot of racquetball with Stan,” Miller said, “and it was on the racquetball court where Stan told me about the job opening at Tsillan Cellars, which turned out to be my first winery job.”

“We’re currently producing 36,000 cases, but we should go above 40,000 with this harvest. It looks like it’s going to be a good one for us,” said Marcus, who helped Airfield Estates earn Wine Press Northwest magazine’s Washington Winery to Watch award in 2010.

The doors for Entwine open at 5 p.m. It starts with a silent auction and wine reception featuring 22 wineries – each with a graduate or current student pouring their wine.

Miller, 35, will bring his wife, Adrianna, and a few bottles of Airfield Estates Pinot Noir, a variety seldom produced in Washington state but one he enjoys producing about 200 cases of each year.

“It sounds like they are going to be treating us like celebrities,” Miller said. “That will be a new experience for me, and it’s going to be fun.”

According to Melissa Harrison, the college’s director of marketing, this year’s live auction features lots including a collection of eight 3-liter bottles from winery members of the advisory board and a trip with private tastings at Cayuse, Leonetti and Pepper Bridge, a gourmet lunch provided by Wine Country Culinary Institute and hosted by Alan Busacca, the college’s new director of enology and viticulture.

At 6:30 p.m., Seattle media personality John Curley will serve as the master of ceremonies, which include a wine-paired, gourmet four-course dinner and the live auction. This spring, Curley, former host of KING-TV’s Evening Magazine, launched a weeknight program on KIRO 97.3 FM.

And if Entwine was any other night of the year, more of Miller’s family would be joining him in Walla Walla.

“That’s the same weekend as our biggest event of the year so Dad and my sister Lori will get to hang out with our club members that Saturday,” Miller said. “We have a big foot stomp, and our Ruby Rosé is actually made from those (Sangiovese) grapes that people stomp on up to their mid-shins. So my wife and I will leave the stomp a little early, and I’ll trust my guys to get the fermentation started for me.”

For more information on Entwine and to purchase tickets, visit entwine.wwcc.edu or call Denise Marr at 509 527-4275.