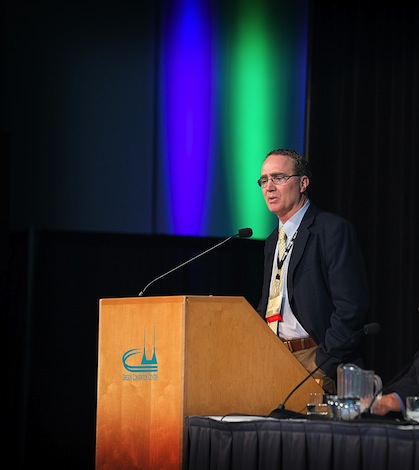 ASHLAND, Ore. – Greg Jones, a Southern Oregon University professor who is one of the wine world’s top climatologists, predicted a week of mixed conditions as Pacific Northwest grape growers and winemakers ramp up harvest of the 2013 vintage.

“The onset of fall appears with us and will continue its transition over the next couple of weeks,” Jones wrote in an email Monday to subscribers of his periodic weather updates. “A general southward shift in the jet stream, which happens around this time ever year, is developing and is bringing the western U.S. a pattern of on-again, off-again precipitation events.”

However, the long-range outlook for the 2013 harvest is for the trend of the summer to continue.

“Overall, September is still forecast to end up being warmer than normal, with near normal to slightly below normal rainfall across the western U.S.,” Jones wrote. “Long lead forecasts into October and November are also still pointing to a greater chance of warmer and drier conditions for the western U.S. However, the fall season transition and dynamics in the tropics to poleward regions tends to tell me it will be much more unsettled and closer to a normal transition into fall and winter.”

Harvest in Southern Oregon began in earnest over the weekend, while some winemakers in Washington already are seeing a few of their fermentations wrap up.

“We harvested Muscat two weeks ago, and I have one ferment that’s finished,” said Marcus Miller, winemaker of Airfield Estates in Prosser, Wash. “Today is the first day for Merlot, and we will be bringing it in like crazy for the next week.”

Wind and rain plagued wide stretches of the Pacific Northwest on Sunday night. Later in the week, some areas in the Cascade foothills in Eastern Washington could see near-freezing temperatures at night.

“As promised, the first event has mostly passed with rainfall limited to light amounts in the Willamette Valley and the majority in the Puget Sound,” Jones said. “The next system will occur Tuesday night into Wednesday with the storm track headed south into California and introducing the first widespread chance of rain in quite a while. Models diverge on amounts, but would likely be highest along the coast and inland mountains, and spotty in the western valleys and on the east side of the Cascades. Cooler temperatures will ‘feel’ like fall, with the season’s first chance for frost on the east side of the Cascades.”

While some vineyards in the Walla Walla Valley are gearing up to bring in fruit in two weeks, on Monday, areas of Washington’s Wahluke Slope began harvesting Syrah.

Picking conditions look good for later this week, according to Jones.

“Thursday through Friday night is forecast to dry out and warm to above normal temperatures but gives way to the next system for the weekend,” he said. “Models suggest a larger, more widespread wetting rain up and down the West Coast with the arrival storm track determining the wettest locations.”

Next week is too difficult to accurately predict at this point, Jones suggested.

“The week of Sept. 23-27 is mixed with some models showing a slight drying and warming trend, while others continue the on-again, off-again precipitation events,” he wrote. “Keep an eye on the forecast developments into the weekend.”