One of Oregon’s hottest-selling wines, Copa Di Vino in The Dalles, is in the running for a free Super Bowl Sunday TV commercial and is seeking votes.

Predictably, hundreds of businesses in the United States have entered the contest, but Copa Di Vino is looking to become “the first winery to have its own Super Bowl ad.” 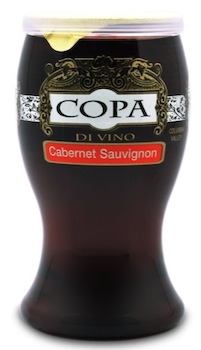 Several years ago, James Martin created Copa Di Vino after launching Quenett Cellars in The Dalles. His slogan for Copa Di Vino is “wine in the glass,” and consumption of the single-serving recyclable plastic vessels begins after simply peeling off the lid as you would with a cup of yogurt.

There’s no corkscrew and no need to open an entire bottle for a glass of wine. And there is no glass involved, which makes it easy to serve and a safe alternative to use at venues such as concerts, stadiums and picnics where there is concern about breakage.

According to Martin, Copa Di Vino is available in more than 40 states, and regular tax reports from the Oregon Liquor Control Commission indicate Martin’s winery with the largest sales of any in the state.

He continues to sell his Quenett brand through the Copa Di Vino site, and he operates tasting rooms in both Hood River and at the Sunshine Mill Winery inside a historic building and landmark he’s revived in The Dalles. And his team actively markets Copa both to consumers and at trade shows such as the Washington Association of  Wine Grape Growers annual convention.

Intuit got some juice for its campaign by hiring Jerry Johnson, who coached the Dallas Cowboys to a pair of Super Bowl titles. Johnson stars in a mildly entertaining commercial by Intuit, which promotes its contest.

The first round of the four-step competition ends later in September.

“Why should beer have all the funny commercials?” is Copa Di Vino’s campaign slogan.