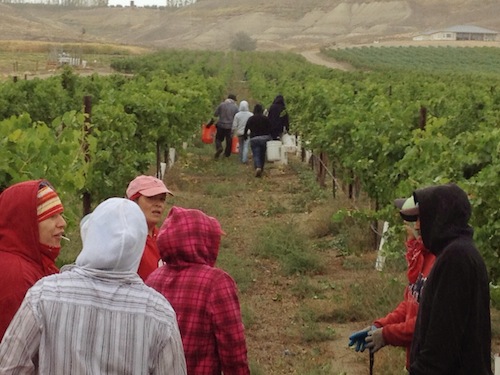 Workers try to stay warm during cold and rainy conditions Tuesday as picking for Viognier is postponed at Williamson Vineyards on the Sunnyslope region of Idaho’s Snake River Valley. (Photo by Eric Degerman/Great Northwest Wine)

ASHLAND, Ore. – Renowned wine climatologist Greg Jones, a professor in the environmental studies department at Southern Oregon University, issued a warning Friday for an “unprecedented atmospheric river of moisture” to sweep the Pacific Northwest this weekend.

“An already wet later half of September will unfortunately get wetter as a system has developed that was not in the forecast last week and is rapidly moving toward the West Coast,” Jones wrote in an email sent to his subscribers. 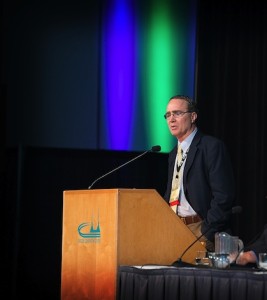 Greg Jones, an environmental studies professor at Southern Oregon University, is considered one of the world’s leaders in researching climate for wine grape production. (Photo by Carolyn Wells-Kramer/Courtesy of the Oregon Wine Board)

This week, wine grape harvest slowed dramatically in the region as a result of unseasonably cool and wet conditions throughout the Northwest, but Jones noted the latest forecast took even the National Weather Service by surprise.

“This next system may not have even happened had it not been juiced with the remnants of typhoon Pabuk from the western Pacific,” Jones wrote. “The entrainment of the tropical moisture into the jet stream flow in the last couple of days has been dramatic … the NWS has even said “WHAT A DIFFERENCE 3-4 DAYS HAVE MADE IN THE MODEL GUIDANCE, THIS WAS NOT EXPECTED AT ALL!” They are even calling this an unprecedented “ATMOSPHERIC RIVER” of moisture for anytime of the year, let alone September.”

Friday and Saturday could see a rush of picking throughout the Northwest and increased worries of damaged grapes. The forecast calls for 2 inches of rain in the Puget Sound and 4-8 inches of rain for the Washington Cascades. High wind and flood warnings have been issued.

Gerrit Hoogenboom of Washington State University’s AgWeatherNet sent out an email Friday afternoon predicting, “It is likely that this will be one of largest rain events in recent memory to occur so early in the autumn.”

In Washington’s Columbia Valley, the NWS posted a wind advisory from 2 p.m. Saturday through 5 a.m. Sunday. Gusts are expected to come from the southwest and reach 55 mph.

“There is still some uncertainty in the models for locations of highest moisture and duration of the system, but all evidence is pointing to the system coming onshore Saturday night through Sunday from the Olympics down into Northern California,” Jones wrote. “Rainfall amounts could be extreme with NWS noting that current model solutions show a 30-year event with rainfall totals up to 10″ along the coastal zones and some higher elevations. Inland valleys will get less, but still more than any of us likely want, and depends on storm track and duration. Temperatures are likely to be warmer due to the tropical moisture, but still cool for this time of year.”

Hoogenboom predicted, “By early next week, the heavy rain will have ended, although rain or showers will remain likely in most areas except central Washington. While cool and unsettled conditions are expected, it is not clear if any additional organized storms will pass through Washington early next week. However, snow showers are likely in the higher elevations, as snow levels drop back down to around 6,000 feet by Monday. Drier and calmer weather may return later next week, along with warmer days and cooler nights.”