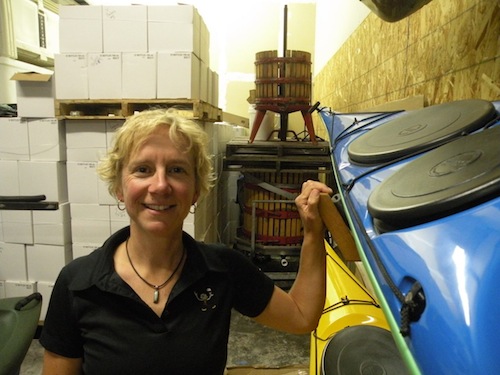 PORT ANGELES, Wash. – Sara Gagnon is either a kayaking winemaker or a winemaking kayaker. Either way, she is enjoying the adventure of life as an entrepreneur and owner of two businesses.

Gagnon is the owner and winemaker of Harbinger Winery. Just west of Port Angeles, it is the northwestern-most winery in the continental United States.

And with Tammi Hinkle, she is the co-owner Adventures Through Kayaking, through which they lead kayak, mountain bike, raft and paddleboard tours in the Strait of Juan de Fuca, on Lake Crescent and on various rivers on the Olympic Peninsula.

Gagnon, who grew up in Port Angeles, has been an entrepreneur at heart for most of her life. She opened the area’s first espresso stand in 1993, when she was 22 years old, then moved to Seattle to go to college and work in the insurance business. But the beauty of the Olympic Peninsula lured her back, and she decided on the artistry of winemaking to slake her passion. 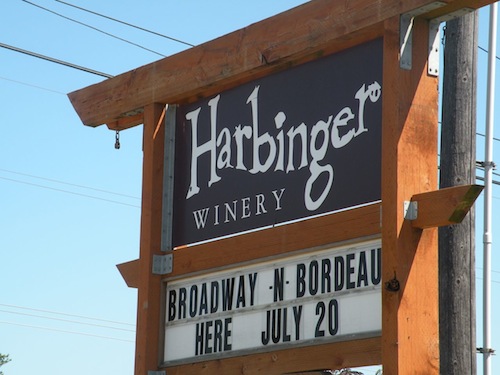 Harbinger Winery is west of Port Angeles, Wash. It is the northwestern-most winery in the continental United States. (Photo by Andy Perdue/Great Northwest Wine)

Gagnon began making wine at home before she could legally drink it, so that interest was there all along. She took an apprenticeship in 2001 at Olympic Cellars, which is on Highway 101 between Port Angeles and Sequim. It started as an apprenticeship but quickly turned into a fulltime position as head winemaker.

In the back of her mind, Gagnon knew she wanted to be her own boss. By 2003, she began working for Adventures Through Kayaking as a guide. In 2004, she and Hinkle where flying to Boeing Field from Port Angeles, when the plane crashed in Olympic National Park. After recovering from her injuries and working through the 2004 harvest, she launched Harbinger Winery.

In 2007, she became a part-owner of Adventures Through Kayaking with Hinkle. The two businesses share a building along Highway 101 just west of Port Angeles.

It would seem Gagnon has the best of all her worlds. She can make wine, yet be kayaking in the Strait of Juan de Fuca or hiking on Hurricane Ridge in less than an hour.

Gagnon has a few Zinfandel vines growing along a fence in her winery parking lot, but they are just for show. All of her grapes come from the Columbia Valley, including such vineyards as Sagemoor and Elephant Mountain. She also makes a couple of fruit wines, including blackberry and raspberry.

Harbinger Winery is part of a growing group of wineries on on near Highway 101 in the towns of Port Angeles, Sequim and Port Townsend on the top of the Olympic Peninsula and Shelton, Belfair, Olympia and Aberdeen at the bottom of the peninsula. Additionally, wineries on San Juan, Lopez, Whidbey and Bainbridge islands mean wine lovers can easily spend a long weekend touring the regions on the west side of Puget Sound.

Gagnon’s lineup of wines includes more than a dozen different bottlings, and she also offers local beers on tap, including those of Barhop Brewing in Port Angeles.

Her wines are gaining regional and national acclaim. This year, her 2010 Malbec won gold medals at the Great Northwest Wine Competition and Washington State Wine Competition, and El Jefe — a red blend — won gold and best in class at Sunset magazine’s international wine competition. Additionally, her 2009 Barbera won a gold medal at the Seattle Wine Awards.