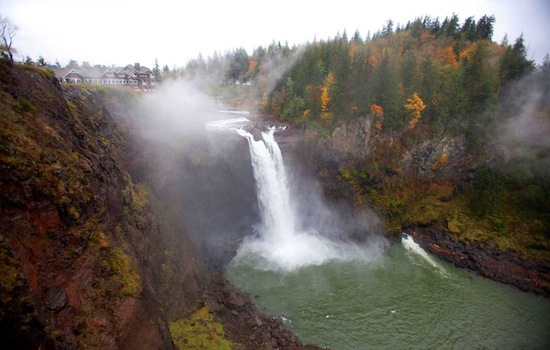 SNOQUALMIE, Wash. — Robert Dolan has been on the retail side of the Washington wine industry for a dozen years, and while he’s still in his first year at The Salish Lodge and Spa, he’s played a key role in helping the renowned Snoqualmie Falls destination chart a new course with its wine program.

This summer, The Salish began to partner with award-winning Treveri Cellars in the Yakima Valley for two sparkling wines and Red Mountain showpiece Terra Blanca Winery and Estate Vineyard for still wines.

“We’re really excited about the relationships we have with those producers,” Dolan said. “The Salish Lodge had wanted to go with a private label for some time. It was just looking for the right partnerships to do that with.”

Earlier this year, Dolan was named food and beverage supervisor at The Salish after spending eight years at one QFC’s top wine departments and then operating a pair of tasting rooms in Woodinville, one of them being Otis Kenyon.

“I love what my state does,” Dolan said. “Obviously we have a focus for Washington on the wine list, but we also try to showcase the Pacific Northwest. Washington doesn’t do a lot of Pinot Noir, so we are sourcing those from Oregon.” 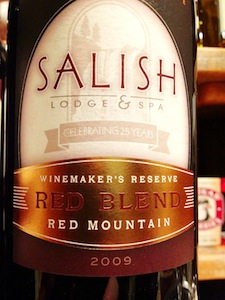 The new house still wines are made in collaborations with owner/winemaker Keith Pilgrim at Terra Blanca, and they include a Chardonnay, an inexpensive red blend and a reserve-style of red Bordeaux varieties.

This relationship with Terra Blanca also allowed Dolan and other team members to spend time on Red Mountain with the winemaker.

“For a few of them, that was the first experience they’d ever had visiting a winery, so that was fun for them, and it allowed us to get a deeper understanding of our wines,” Dolan said. “Keith was great and walked us through the vineyards and through the caves, so they got a real one-on-one experience with the winemaker. I made sure the staff knew that when they go to other wineries, they may not have the same type of experiences.”

About 30 minutes to the west, longtime Columbia Valley winemaker Juergen Grieb is busy crafting the Treveri bubbles for Dolan and The Salish, which selected the Sparkling Rosé and the Brut. 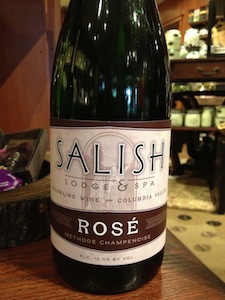 “Both are very well done and the effervescence is nice and clean,” Dolan said. “They are not ridiculously dry, and for our clientele and our food, it’s nearly perfect.”

With all the celebrating that takes place daily among guests at The Salish Lodge, those house wine programs — both still and sparkling — fit in. Dolan said the resort serves as a destination for corporate retreats and more than a 140 weddings each year. One day this summer, The Salish played host to a wedding of 160 guests, another set of nuptials with 130 witnesses, and two business meetings that averaged 45 attendees.

“That was a crazy day — and that’s not counting what we did for dinner that night, which was about 120,” Dolan said.

This summer, The Salish also unveiled two new adult beverages that created a buzz because of the estate ingredients.

“In June, we celebrated our 25th anniversary of being The Salish Lodge, and we celebrated by launching not only our new wine programs, but we also launched a brand new honey ale,” Dolan said. “We have our own bee hives on the property, and we produce enough honey to make our own honey beer and our own honey vodka.” 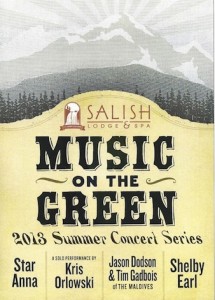 Snoqualmie Brewery produces the beer while Glass Distillery handles the vodka, and both were featured throughout the lodge’s Music on the Green summer concert series, which the Columbia Hospitality property launched this year. Capacity of the venue is limited to 130 guests.

“It’s another opportunity for us to show off what’s new around here and bring people from outside the area,” Dolan said. “We’ve been very busy on the food and beverage side of things, that’s for sure.”

Among the appealing features of The Salish Lodge & Spa is the remarkably affordable wines for sale in the gift shop. Bottles from acclaimed producers such as Elk Cove Vineyards and Januik Winery are sold prices you’d expect at a supermarket or wine shop — not at a high-end resort.

“They can also bring that bottle to the dining room if they’d like, and depending upon the price of the wine, we might waive the corkage fee,” Dolan said. “We are a lodge, first and foremost. We’re not swanky. We want to stay true to our roots. Sometimes someone will ask us something like, ‘Where’s the candy machine?’ and we’ll have to kind of break their hearts and tell them we don’t have one on-site, but we try to accommodate just about anything someone might need.” 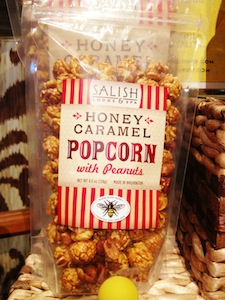 From the start of its history, The Salish Lodge boasted one of the most expansive and inclusive Washington wine lists in the state. In fact, Wine Press Northwest awarded it Best Washington Wine List in 1999, the property has a long string of recognition from Wine Spectator. It continues to feature a dazzling array of vintages from the likes of Andrew Will, Leonetti Cellar, Quilceda Creek and Woodward Canyon.

“I’d say about 90 percent of the people who stay here are celebrating an anniversary, a birthday, something special,” Dolan said.

Over the years, though, the wine list grew to excess and Dolan continues to reshape it.

“We do seasonal menus and change them out twice every season to keep current with what is fresh and available, so our wine list needs to be constantly adjusted so that we are supplying the right wines for the menu,” he said. “The most important thing is not the wine list, but the food that comes out onto the table. Every wine on that list must be versatile enough to be served with our food.”