After one of the hottest summers on record, temperatures dropped off the table three weeks ago and have stayed there.

“I’ve never see it just turn the corner in mid-September and not see any warm days again,” said Wade Wolfe, owner and winemaker for Thurston Wolfe Winery in Prosser. “This has been a very unusual fall.”

Wolfe, who came to Washington’s Columbia Valley in 1978 as a viticulturist for Chateau Ste. Michelle, talked Tuesday afternoon just after a thunderstorm moved through the Yakima Valley.

“We’ve been in this weather pattern for three weeks, and I see no sign it’s going to turn,” Wolfe told Great Northwest Wine.

Wolfe began harvesting Sept. 11, bringing in Viognier, Grenache, Lemberger and Pinot Gris. He’s now brought in everything except Cabernet Sauvignon, which he plans to harvest later this week and early next week.

High temperatures all summer across the Columbia Valley depleted much of this year’s wine grape crop of all-important acidity, Wolfe said, and he has had to acidify more than usual this year.

“The high temperatures we had in early September had a much bigger impact on acid than they did on sugars,” he said.

As a result, Wolfe believes this year’s wines will be challenging to get into balance. That said, he’s pleased with the reds he has brought in so far. 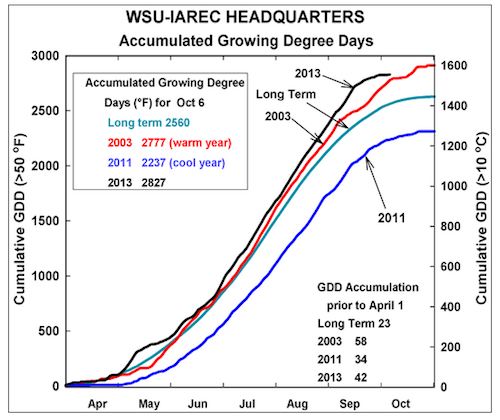 Heat units, a measurement of how warm a vintage is, have dropped considerably in recent weeks in Washington’s Columbia Valley. (Image courtesy of Washington State University)

Rob Griffin, owner and winemaker at Barnard Griffin in Richland, echoed much of what Wolfe said, noting he has not seen any appreciable sugar accumulation in the last three weeks.

“Things have been standing still,” he said.

“The on-the-vine roasting (in August and early September) was not a good thing,” he said.

“It’s strictly reds from this point forward,” he said.

And just in time, he noted. While Cabernet Sauvignon is resistant to rot, Riesling is not. Griffin brought in the last of his Riesling last week.

“Thank heavens,” he said, noting he has seen some vineyards that have at least half the crop lost to “a lot of wet, nasty vinegar rot.”

Griffin said except for Cabernet Sauvignon and “a few exotic varieties,” he can see the end of the 2013 harvest in sight. 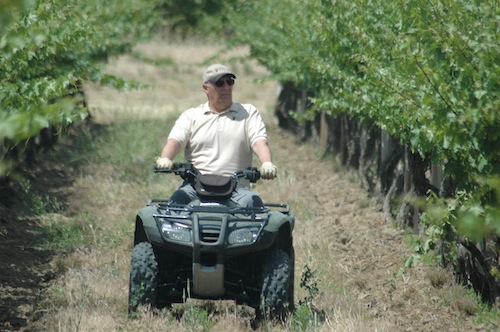 Paul Champoux looks at his 1972 block of Cabernet Sauvignon in the Horse Heaven Hills. (Photo by Andy Perdue/Great Northwest Wine)

In the Horse Heaven Hills, grape grower Paul Champoux has mostly dodged the rain and hail that have dogged other areas of the Columbia Valley.

“My grapes are in great shape,” Champoux told Great Northwest Wine. “We’re not seeing any shrivel.”

Champoux estimates about 60 percent of his crop is harvested, and he’s getting heavy into Cabernet Sauvignon, which makes up the vast majority of his famous vineyard.

He even reported that acidity levels have not been as low as reported elsewhere in the Columbia Valley. Champoux said he was tasting grapes Monday with Chris Camarda, owner of Andrew Will Winery on Vashon Island, and both were happy with the quality of the Cabernet Sauvignon.

“I’m pleased with most everything,” he said.