Charlie Hoppes, owner of Fidelitas Wines, focuses most of his efforts on Red Mountain grapes. He finished harvest this week. (Photo by Andy Perdue/Great Northwest Wine)

Most winemakers and growers are wrapping up their picking for the 2013 vintage. Harvest began in late August, about a week earlier than normal.

Charlie Hoppes, owner and winemaker for Fidelitas Wines on Red Mountain, predicted in early September that Red Mountain would be mostly picked by Oct. 1. Despite a cool spell that began three weeks ago and hasn’t warmed back up, Hoppes nearly was correct.

The last bit of Cab Franc came from Red Mountain Vineyard, which is just across Sunset Road from his tasting room. Hoppes also has just under 3 acres of Cabernet Sauvignon at his tasting room, including three different clones. This was the second year he took a crop off his estate grapes. And he is studying how these vines perform – and the resulting wines taste – to decide what to plant in his remaining 10 acres adjacent to the tasting room.

Hoppes said clonal selections of Cabernet Sauvignon are becoming a big deal in Washington, especially on red-heavy Red Mountain. The standard clone grown across Washington is clone 8, which he describes as a bit one-dimensional. New clones provide different flavors, earlier ripening and sometimes lower crop levels. All of these add up to greater complexity.

“These give you some variability,” Hoppes said. “That’s the big direction we’re seeing on Red Mountain.”

He noted the clusters look different and the grapes even taste slightly different. Hoppes is fermenting the clones separately before blending them to see how they perform. He uses the same yeast strains to ferment and the same oak to age so he can have similar baselines.

Hoppes can see the day when he will bottle different clones of Cabernet Sauvignon separately – something Rob Griffin at Barnard Griffin in nearby Richland has been doing for a few years for his wine club members.

Just down the road from Fidelitas, Jim Holmes of Ciel du Cheval said all but one area of his famed vineyard has been picked. What is left is for a client who wants a bit more hang time. 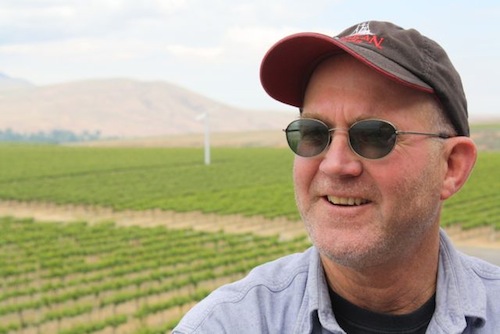 Scott Williams, second-generation winemaker at Kiona Vineyards & Winery, has brought in about 75 percent of his grapes from 240 acres. (Photo by Andy Perdue/Great Northwest Wine)

Meanwhile, across the road from Ciel du Cheval, Scott Williams of Kiona Vineyards & Winery said he is far from finished picking the 240 acres he and his family own.

“We still have a lot of grapes out there,” he said. “It’s going well. We’re picking every day.”

Williams estimates he is about three-fourths done picking grapes. He finished with Petite Sirah and Cabernet Franc earlier this week and now is focusing on Cabernet Sauvignon.

In addition to his family’s estate Kiona Vineyard, Williams also has Heart of the Hill, a vineyard just below Col Solare, as well as Ranch at the End of the Road, which is up the mountain at the end of Sunset Road.

It’s also continued to be a dry year, despite some rainstorms the past few weeks. So far, Red Mountain has just 4 inches of rain in 2013.