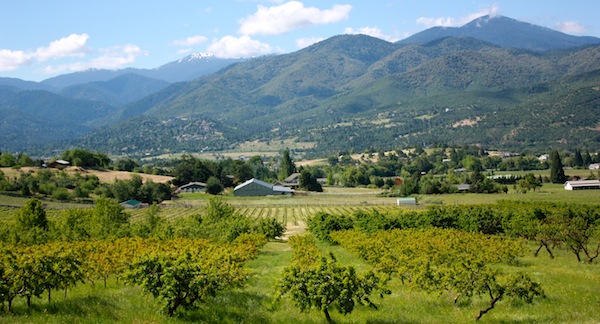 Southern Oregon winemaker Pat Spangler, a former floor trader on the Chicago Mercantile Exchange, is bullish on the October forecast and his 2013 vintage.

“I’m so optimistic that canceled all my California contracts this year. My focus is all on Oregon,” he said from his eponymous winery in Roseburg.

About an hour’s drive to south on Interstate 5, Linda Donovan, who owns Pallet Wine Co., in Ashland, sounded as cheerful as a punch-drunk winemaker can be after another long day on the crush pad.

“It’s beautiful — 72 degrees, sunny and cool at night,” she told Great Northwest Wine on Monday. “It’s making for just really, really great end-of-season ripening and end-of-season flavoring up. The longer that harvest is going to drag out will be great for Cabernet Sauvignon and Cabernet Franc. Many years, we can’t get them this ripe, so we’ll be able to make wines that we haven’t been able to make for a few years.” 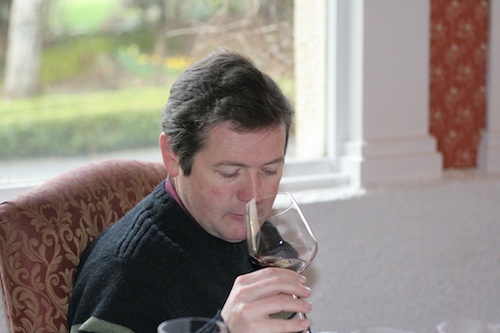 Patrick Spangler is the owner and winemaker at Spangler Vineyards in Roseburg, Ore. (Photo by Bob Marple for Great Northwest Wine)

Spangler said, “The forecast looks phenomenal for the next 10 days; sunny, 70 degrees and not a chance of rain.”

October signals the full-court press for Southern Oregon wineries. Donovan, whose company is the state’s 20th largest in terms of wine production, estimated she had about 70 percent of her production left to bring in. Spangler saw only 10 percent of his fruit through the door so far, starting with Merlot three weeks ago from Cecil Zerba in the Walla Walla Valley and followed Saturday by Sangiovese and Tempranillo from The Grande Dalles Vineyard near The Dalles.

“Everybody is picking this week,” he said. “I work with a dozen vineyards, so I’ve got to schedule all that in around the trucks and the processing. I’m glad we had that Merlot in. That’s already pressed and in tanks. It’s just waiting to go into barrels.”

Cool and rainy weather either slowed down or halted harvest throughout the Northwest, but particularly in the Willamette Valley. In many respects, Spangler said he welcomed the two inches of precipitation he received at his dry-farmed estate vineyards surrounding his winery.

“I don’t like the grapes in really hot years and making wines from them is not my style,” Spangler said. “You’ll get Grenache at 25 brix, but the seeds will be green and the pH at 3.3, which is a combination that makes for a really poor wine. Some years, I’ve asked some growers to water the vines. This year, Mother Nature did that for us.”

While she doesn’t have the rain-induced headaches and worries that many Pinot Noir producers in the Willamette Valley are suffering from, Donovan said smoke taint from the region’s historic plague of forest fires during the summer sits in the back of her mind with a few lots. 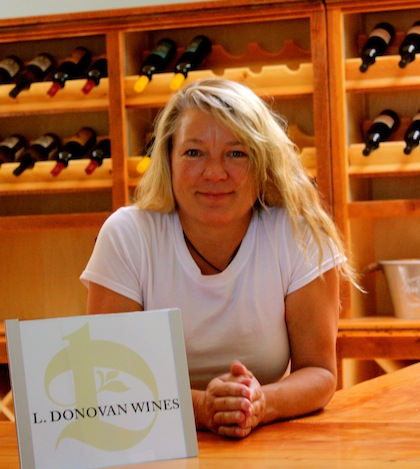 “I don’t want to say I’m worried, but there is the potential,” she said. “It could lead to some creative blending or changing of styles.”

Donovan, a University of California-Davis grad, came to Oregon after working at California icons such as Beaulieu, Mondavi and Schramsberg. She’s reached out to some of her colleagues in California for winemaking tips should she come across a lot that may have been exposed to smoke.

“In my research and in talking with people in the Anderson Valley who dealt with wild forest in 2008, it doesn’t go away,” she said. “You can’t perceive it until after primary fermentation. It has a lot to do with the timing of the smoke, the maturity of the grapes at the time and a particular stage of veraison.

“Different varieties will show the effects differently, and some wines won’t be impacted,” she added. “You might go with reduced skin contact during fermentation, which is a trade off because you won’t have the phenolics and some of those flavors that you get out of the skins. It’s not easy, and a little bit more stress late at night doesn’t help either.”

Some wonder about Southern Oregon bottling smoky Côte Rotie-style Syrah from the 2013 vintage, and ironically, Rhône red varieties and blends are the focus for the young L. Donovan Wines brand at her new tasting room in Ashland.

“I seem to be drawn to those wines more than others,” she said.

The focus at Spangler Vineyards long has been on Bordeaux and Rhône varieties, but he’s branching out a bit for 2013.

“I’ve got the new tasting room in McMinnville, so I’m making Pinot Noir for the first time in six years,” he said. “It’s coming from O’Brien, a higher-elevation site which is about nine miles from the California border. ”

The crush campaign for Pallet Wine Co., began Sept. 4 with Sauvignon Blanc from the Ashland area.

“We were a little bit surprised by the early harvest,” she said. “We were still bottling on 9/13, which made it a little challenging,” she chuckled.

The hot summer and fast start concerned Spangler, who strives to create wines with lower alcohol and high natural acidity.

“I think this slowdown actually makes for better wines,” he said. “It had been very warm and very, very dry. We were on track for the hottest year since ‘92, so to have longer hangtimes for a very warm year is important.”

Donovan predicted, “People are going to be very pleased with the wines from this year.”

And the hot growing season likely means she shouldn’t need to worry about a repeat of 2011.

“That year, I got grapes on Dec. 1 — Tempranillo from Ashland — the same vineyard I brought in the Sauvignon Blanc so early this year,” she said. “In 2012, we were pretty much wrapped up in the second week in November, and this year, we should be comfortably done by the end of October.”

That’s good because she’s already bought her plane ticket for a trip to Maui in November.

“It’s a ritual for me to get warm and decompress,” she said.

In the meantime, farmers and winemakers will fix one eye on the crush pad and the other on the weather forecast.

“Once it gets below 28 degrees overnight down to the south, that ends the season,” Spangler said. “Three days before that comes, everybody picks everything. I’m not seeing that now, though.”