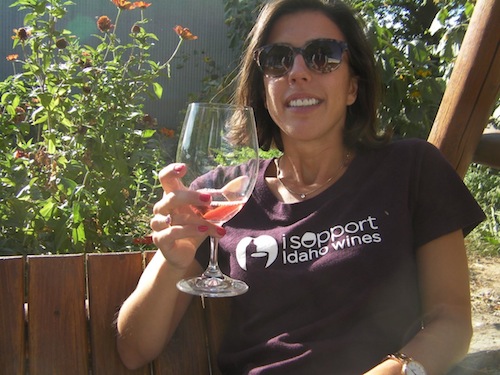 Moya Dolsby, executive director of the Idaho Wine Commission, has helped the state wine industry pick up a lot of momentum since arriving five years ago. (Photo by Andy Perdue/Great Northwest Wine)

BOISE, Idaho – Perhaps it should come as little surprise that the Idaho wine industry is on a serious roll this year.

It’s been five years since Moya Dolsby arrived as executive director of the Idaho Wine Commission, fresh from working for the Washington State Wine Commission in Seattle.

Indeed, she has taken much of what has helped make Washington successful and applied it to the burgeoning wine industry in the Gem State.

“I learned from the best,” Dolsby said, referring to Steve Burns, her mentor who served as executive director in Washington before moving to California to start his own marketing firm. 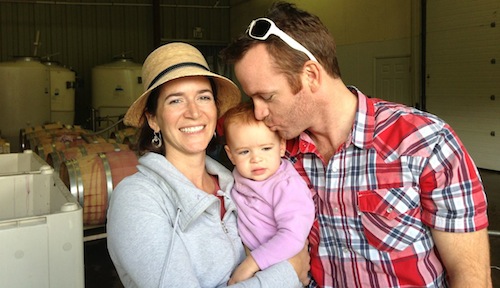 Today, Idaho has 50 wineries, which stretch from the Canadian border in Sandpoint nearly to the Nevada border in the south. Reaching 50 has been a long time coming for the state wine industry, which began its modern era in 1976 when Ste. Chapelle opened its doors in the then-sleepy town of Caldwell overlooking the Snake River.

Reaching 50 wineries also seems to have been a tipping point for Idaho, as the industry has enjoyed a lot of momentum in 2013.

“You need that many to be taken seriously,” Dolsby said.

Melanie Krause, a Boise native, was trained in winemaking at Chateau Ste. Michelle before returning home to launch Cinder Wines in 2006.

“The first year, I had to bang down peoples’ doors and force my wine down their throat because they weren’t enthused with Idaho wine,” Krause said. “Now that sense has totally turned around. We have people calling, saying, ‘Hey, I need an Idaho wine on my menu.’ That never happened even two years ago. The momentum is really exciting.”

It was something Dolsby battled before she arrived five years ago.

“Even when I started in Washington (in 2004), we still had to beg restaurants to carry Washington wine,” she told Great Northwest Wine. “But you just have to go for it. It’s a hard road road to go down. You hope people will be receptive.”

They have. June was Idaho Wine Month, and this year it included Gov. Butch Otter signing bottles at an Albertsons store in Boise. That’s not something you see happening in Washington.

The latest bit of momentum arrived this week when a Nampa film company called Peppershock Media announced it is making a documentary about Idaho wine. Dolsby is thrilled, and she wishes she had some money to help back the film. Instead, she is helping the company by connecting its owner with those who might be able to financially support it.

“Everyone’s coming together to help this happen,” Dolsby said.

Dolsby and her small staff share office space a couple of blocks from the Capitol building with several other commodity commissions, including the Idaho dairy and barley farmers. Though she’s about a half-hour drive from the vineyards to the west in the Snake River Valley, she’s close to the lawmakers who can help promote wine and the restaurateurs and merchants who can sell it.

With all the progress Idaho wineries have made since Dolsby’s arrival, more challenges lie ahead, not the least of which is a serious lack of grapes. Today, the state has about 1,200 acres, most of which are in the Snake River Valley around the towns of Caldwell and Nampa.

“We need more grapes in the ground,” Dolsby said. “I think we could easily double what we have.”

Not satisfied with waiting for someone else to pick up the slack, Dolsby plans to spend a lot of time this winter talking to winemakers to determine just how much more fruit they could use. Then she will go out and find someone to plant the grapes.

Then there are those license plates. Thanks to brilliant marketing that includes the words “Famous Potatoes” on the back of nearly every vehicle in the state, Idaho is known worldwide for its spuds. Overcoming the perception that Idaho is about more than potatoes will likely be Dolsby’s greatest challenge.

She and her staff are working on a video that will spoof the famed tuber, which she hopes will help highlight wine.

Also in the works are two petitions for new American Viticultural Areas: the Lewis-Clark Valley and Willow Creek. Lewis-Clark Valley would be shared with Washington and would be around the towns of Lewiston, Idaho, and Clarskton, Wash. Willow Creek would be a sub-AVA of the Snake River Valley near the town of Eagle. The Snake River Valley was approved in 2007 and has been a marketing boon for Idaho wineries because it provides more credence and allows them to avoid being confused with those famed potatoes.

Idaho wine all about diversity

Idaho not only has 50 wineries, but it also grows a wide variety of wine grapes, including everything from Riesling to Tempranillo. (Photo by Andy Perdue/Great Northwest Wine)

“The Riesings have been phenomenal,” she said enthusiastically. “When I first got here, I was determined that we were not going to hang our hat on Riesling. I was really against it. I’ve changed my mind.”

Indeed, Idaho was one of the featured regions at this year’s Riesling Rendezvous in Seattle, where winemakers and enthusiasts from around the world came to taste the noble white grape.

And when Coiled Wines‘ 2012 Dry Riesling won best in show at the annual Idaho Wine Competition, world-renowned Riesling expert Stuart Pigott of Germany tweeted that he wanted to taste it, too.

Dolsby looks at Oregon’s focus on Pinot Noir, but she wants to make sure Idaho looks more like Washington and its diversity of grapes.

“I want us to be known for more than just Riesling,” she said, then exuded about one of her favorite new varieties: Tempranillo, the red grape of Rioja.

“Tempranillo in Idaho?” she said. “Who would have thought!”