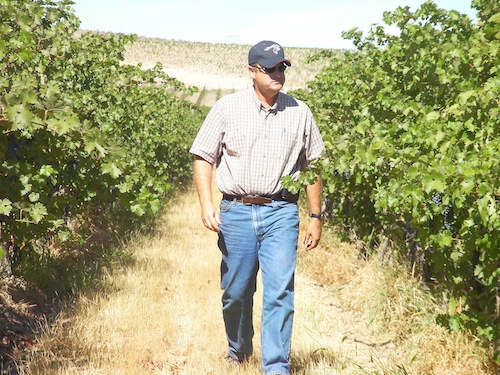 For the two men responsible for making more wine than anyone else in Washington state, the 2013 harvest could not be wrapping up more gracefully.

“We live for days like this in late October,” Muñoz-Oca said of the past week, which has seen cloud-free skies and highs nearing 70 degrees on a daily basis. “We could not have asked for anything better.”

Combined, the two winemakers are responsible for more than 4 million cases of wine as part of Ste. Michelle Wine Estates in Woodinville. And each focuses on his own program. Bertheau and his team craft more Riesling than any other winery in the world, while Muñoz-Oca produces large amounts of Merlot, Cabernet Sauvignon and Chardonnay for Columbia Crest’s many tiers and brands.

Bertheau wrapped up harvesting Chardonnay this week and is three-fourths complete with Riesling.

“That’s pretty good for mid-October,” he said. “The Yakima Valley is great for Riesling this year. Chardonnays are on the tropical side” because of the warmer-than-usual season. “In the cool spots, acids are gorgeous.” 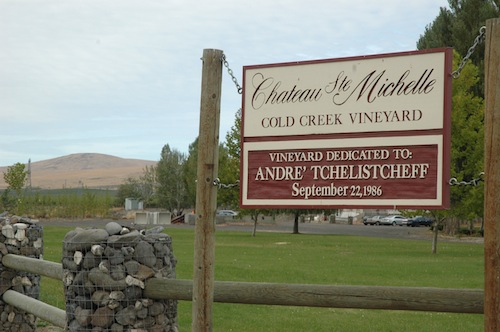 Cold Creek Vineyard is one of Chateau Ste. Michelle’s prized places, and head winemaker Bob Bertheau is excited about some new vines that are coming on strong. (Photo by Andy Perdue/Great Northwest Wine)

Cold Creek, a warm area north of the Yakima Valley town of Sunnyside, is one of Bertheau’s favorite estate vineyards, and he’s excited about what he sees there.

“It’s all reds at this point,” he said. “We’re more than halfway done harvesting. We’re not getting more sugar, just beautiful hang time.”

Bertheau noted that the vineyard has been expanded by a couple hundred acres in recent years, and those young vines are coming on strong.

“Some of the young kids are showing as well as the older blocks,” he said excitedly. “The younger vines are going into five years (in the ground) and starting to show style and quality. That’s exciting.”

Muñoz-Oca also gets grapes from vineyards near Cold Creek, including Four Feathers, which is adjacent. He is excited about Merlot from that vineyard, but he believes Cabernet Sauvignon will be the star of the vintage, thanks to the extended hang time provided by the weather that suddenly cooled at the end of September.

“The name of the game is Cabernet,” he told Great Northwest Wine. “It’s going to be fantastic. This is perfect hang time for Cab, with mid-60s and sunny days allowing tannins to still develop but not enough heat for the vine to add any more sugar.” 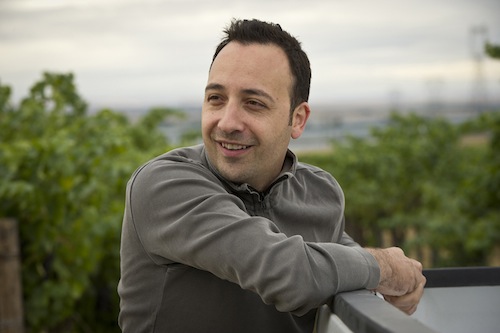 Juan Muñoz-Oca, head winemaker at Columbia Crest in Washington, grew up in Mendoza and worked in the Argentine wine industry before emigrating to the United States (Photo courtesy of Columbia Crest)

Muñoz-Oca, who grew up in Argentina and worked with the region’s world-class Malbec, is ecstatic about what he sees so far in his cellar in Paterson.

“Our Malbec the best we’ve ever made here,” he said. “It is beautiful.”

He said the new crush equipment at Columbia Crest has helped him raise his game.

“The only way I can describe the influence is it’s like listening to the radio that doesn’t have good reception, then suddenly driving into a place with good reception,” he said. “It’s the same tune, but one is clear.”

For the first time, Muñoz-Oca is bringing in grapes from the Walla Walla Valley, including Merlot from Seven Hills Vineyard near Milton-Freewater, Ore.

“There’s an elegance to it,” he said. “The wines are really different. We crush grapes from almost every appellation in Washington. It’s really cool to see how an appellation has its own characteristics.”

Muñoz-Oca expects to be done by Halloween, though harvest might stretch as late as Nov. 2 or 3.

Bertheau agreed. He’s already picked areas in vineyards that are susceptible to frost, which began arriving this week in the Columbia Valley. He’s happy to be in the home stretch. He noted that the numbers on many of his red grapes are tracking almost identical to last year, even though this year has been much warmer.

“Syrahs and Cabs love the heat,” he said. “Syrahs like those extra degree days. They are making themselves right now.”