Editor’s note: This is the first in an occasional series on destination wineries of the Pacific Northwest.

ABERDEEN, Wash. – Who would have thought a winery could work out when it’s so close to the ocean – and so far away from the vineyards?

Leave it to Kim and Blain Roberts to see opportunities when only the impossible presents itself. Together, the couple and their children, Dana and Carrie, have built one of the most enjoyable and popular destinations in an area known as just about anything except wine country.

The couple owned Lahaina Divers on Maui for many years before moving to the mainland. In 2007, they were urged by Don Tapio, a Washington State University agricultural extension agent in the region, to plant a vineyard and open a winery.

“It will be historic,” he told them.

They bought the land in February 2007 and opened the winery a year later, with Dana as winemaker and Carrie as general manager. Westport Winery is built as a scale replica of Grays Harbor Lighthouse. But this family was not satisfied with that. In fact, one thing is evident: The Roberts family is never satisfied.

Soon enough, the wine offerings expanded as the owners asked their customers what kinds of wines they wanted. That led to fruit wines, grape wines, sparkling wines, dry wines, dessert wines and more. Today, Westport offers something north of 30 different wines that will please most palates. 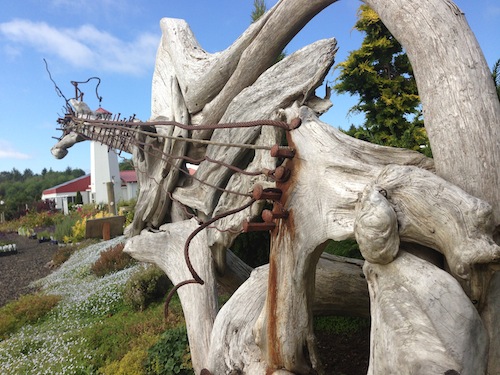 This giant guitar sculpture at Westport Winery made from driftwood honors Kurt Cobain, the lead singer of Nirvana, who grew up in nearby Aberdeen, Wash. (Photo by Andy Perdue/Great Northwest Wine)

The Roberts family wanted to give back to its community, so it found creative ways to do this through its wines. For example, a red blend called “Bella” is an homage to the main character in the Twilight books, whose setting is up the Washington coast in Forks. Thus, sales from each bottle benefit the Mount Rainier chapter of the American Red Cross – and the winery holds blood drives. Bog Berry Blush, a sparkling cranberry wine, benefits the WSU Pacific Coast Cranberry Station and Museum. Captain Gray, a Gewürztraminer, benefits the Grays Harbor Symphony.

The list goes on – and 10,000-case Westport Winery donates thousands of dollars each month to regional charities.

Since the early days at Westport Winery, Kim Roberts has created outdoor visuals in the form of a sculpture garden. She has done a lot of the work herself but also hires artists to put together sculptures that go with the wines. For example, a giant guitar made from driftwood honors Kurt Cobain, the tortured lead singer of Nirvana who was born in nearby Aberdeen. Westport’s “Pinot Noirvana” is named for the singer. In 2012, the winery added a nursery to the outdoor garden. And in 2013, Kim Roberts unveiled themed gardens for Italy, France, England, Japan, Hawaii and Atlantis. And the family also purchased a nearby 40 acres for the purpose of creating an arboretum – a first for a U.S. winery.

The Westport Winery tasting room is always buzzing, whether it’s on a rare sunny summer day or a typically wet fall afternoon. Just off the tasting room is the restaurant that Westport opened in October 2010. It focuses on fresh, local ingredients, and the food is consistently delicious. Westport now has a full liquor license, so getting mixed drinks along with any of the winery’s offerings is no problem. 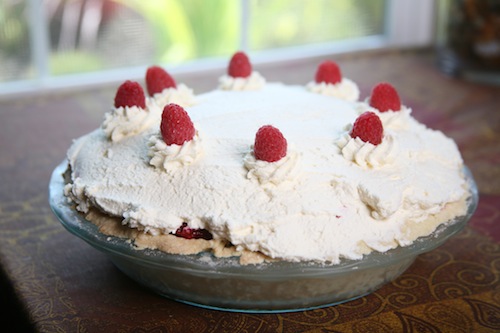 In 2011, the family added a bakery to the restaurant, so it now creates beguiling desserts to go along with the great main dishes.

Westport also is pet-friendly, with six dogs and many cats living on the property.

“It’s usually Lulu and Curzon who meet you at the winery,” said Kim Roberts. “These two rare brown Chow Chows have the unique ability to understand both English and Klingon as they work for biscuits.”

In 2013, the winery created a dog park to make sure everyone who arrives at Westport has a good time. It also is building a nine-hole pitch-and-putt golf course at the winery.

Other activities to enjoy while visiting Westport Winery