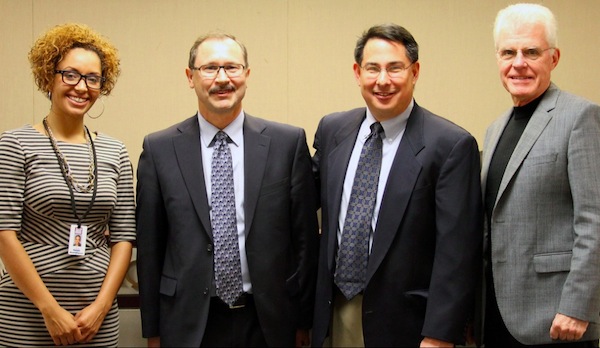 The Oregon Liquor Control Commission named Steven Marks, second from left, as its new executive director on Oct. 24, 2013 in Portland. Three of its commissioners include, from left, Pamela Weatherspoon, chair Rob Patridge, and Bob Rice. (Photo courtesy of OLCC)

Marks, 52, received support from OLCC commissioners Bob Rice, Pamela Weatherspoon and chair Rob Patridge, who made the announcement Thursday. Marks is the permanent replacement for Steve Pharo, reportedly forced into retirement in 2012 by Kitzhaber after six years of service.

Soon after Marks’ appointment was made public, Willamette Week reported Marks allegedly was pulled over for DUI in 2010 by the Oregon State Police while working on Kitzhaber’s gubernatorial campaign. Marks told the Week that he was never formally charged.

In 2006, OLCC executive director Teresa Kaiser was arrested for DUI and resigned soon after.

“The prime directive of OLCC will always be met with an understanding that our first obligation is to protect the public and communities with fidelity, fairness, and integrity,” Marks said in a news release. “At the same time, this is an exciting opportunity to shape the future of the OLCC with a commission that has a passion to facilitate commerce supporting our economy and vital public services.”

Taxes on wine, beer and spirits account for $397 million in net revenue per biennium, so the OLCC oversees the third-largest source of revenue for the state. Those taxes help fund education, economic development, health care, substance abuse treatment and public safety.

Marks, who graduated from Sutherlin High School in the Umpqua Valley and the University of Oregon, listed several goals for his OLCC post. They include support of new ideas for retail, revenue growth, developing better partnerships with local government, ensuring workforce diversity and expanding the public’s knowledge of the OLCC’s role.

Earlier this year, Kitzhaber signed into law the “Growler Bill,” which allows grocers, restaurants and wine shops to fill consumer-supplied bottles with wine from kegs supplied by wineries.

“We are excited that the Commission secured Steve’s brand of collaborative leadership for the OLCC,” Patridge said. “The Commission is now well-positioned to engage with our urgent task of retail innovation.”

Marks, who has spent 28 years in state government, including his service as a policy advisor in the Office of the Senate President. Marks worked in the private sector from 2004 to 2010, launching a public affairs consulting business.

He earned his undergraduate degree in administrative services and received his master’s degree in public policy, planning and management. Marks resigned a $96,000-a-year job at the state’s Department of Administrative Services to take over the OLCC post.

Four citizen commissioners set policy for the OLCC. They meet monthly for one or two days to make decisions on liquor licenses, rules, contested case hearings and appointments of liquor store agents.

Commissioners are appointed by the governor to four-year terms — subject to state senate confirmation — with each representing a state congressional district, with one commissioner being from the food and beverage industry. The commissioners appoint the executive director, who oversees the agency’s 211 employees.