When famed British writer Hugh Johnson first published The World Atlas of Wine in 1971, there were fewer than 1,200 acres of wine grape vineyards in Washington state.

Earlier this month, Johnson released his seventh edition of The Atlas, and the second-largest wine producing state in the U.S. has more than 50,000 active acres, so it’s no coincidence that 17 of the state’s most acclaimed vineyards were spotlighted on the pages of this book ($55) that’s seen six vintages pass since the previous edition published by wine-loving Mitchell Beazley.

It’s 400 pages of beautifully presented reference material that’s worthy of the coffee table, the wine cellar or the den, which is where my review copy quickly found a home. It fits nicely alongside Jancis Robinson’s Vines, Grapes and Wines — another Beazley book that’s within arm’s reach.

This edition marks the third for Robinson, the internationally renowned wine journalist in England who began co-authoring The Atlas with Johnson for the 2001 edition.

“It was the smartest move I ever made,” Johnson wrote in his foreword.

They note the growing interest in wine consumers buying local, even if it means drinking wine made from varieties that are best suited for their area rather than mainstream grapes and the phrase “Anything But Cabernet Sauvignon/Chardonnay.”

Johnson dubbed this interest as “the rise of varietalism.”

Most wine lovers enjoy looking at maps, and the seventh edition has added 25 maps, giving it a total of 215 maps — including a breakout on Virginia. The gazetteer section of the book spans 15 pages, a feature that makes it much easier to find the significant vineyards and wineries mentioned in the text. 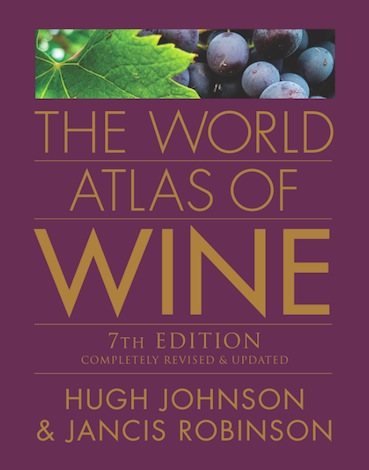 Some of the more fascinating new angles in The Atlas include the expanding interest in cool-climate regions “as the effects of climate change become more apparent.”

Robinson’s intro notes that coverage of North America has grown from 34 to 40 pages, “thanks in part to much deeper coverage of Canada (with Germany and England, one of the prime beneficiaries of climate change)…”

The Atlas provides a stellar look at European producers of wine, and coverage of France, Germany, Italy and Spain chews up most of the book’s real estate.

“Wine is, after all, a European phenomenon,” Johnson wrote. “Where Europeans settled, wine would follow…”

Johnson openly defers to Robinson when it comes to coverage beyond Europe because of her travels, her network of trusted colleagues and presence in the digital world. Specific wineries are highlighted by labels, which indicate an established tradition of excellence with a particular variety, vineyard or proprietary blend.

“I have tried as far as possible to make the labels shown reflect my personal choice of the best wines made in that particular country, region, or district,” she wrote.

When it comes to the Pacific Northwest, The Atlas turned for the first time to writer-turned-vintner Paul Gregutt, who has made his home in the Walla Walla Valley for several years. (Apparently there were no hard feelings after Gregutt pointed out the litany of errors in his review of Johnson’s 2010 Pocket Wine Book.)

The region’s winemaking history is accurately and succinctly presented, and the many differences between Oregon and Washington are easy to digest.

Perhaps the most appealing components throughout The Atlas are the well-scaled maps, and the Pacific Northwest section is no different. They have been vastly improved over the fifth edition and denote the American Viticultural Areas, many of the major wineries and most of the prominent vineyards. Underrated and easily overlooked Whitestone Winery in the tiny Palouse town of Wilbur earned a spot on the Washington map.

Washington state received three pages of text, with one of those going to Walla Walla. It was updated in time to reflect the establishment of the Ancient Lakes of Columbia Valley AVA, but two items that became out of date recently are the shuttering of Tefft Cellars in the Yakima Valley and 14 Hands replacing Snoqualmie in Prosser.

One of the best topics within the two pages on the Willamette Valley touches on the introduction of Dijon clones, an important development for wines made from Pinot Noir and Chardonnay. There’s also an interesting passage that applauds the pursuit of Riesling over Pinot Gris, and the section closes out with description of the annual International Pinot Noir Conference.

Canada’s two pages were divided between British Columbia and Ontario, and the three wineries spotlighted by labels in the BC section are Meyer Family (for Chardonnay), Pentage (for its  blend of white Rhône varieties) and Tantalus (Riesling). In the fifth edition, BC was essentially a footnote in the Pacific Northwest section, so this is an improvement.

More than 4.5 million copies of The Atlas have been sold since 1971, and it’s also been published in more than 15 languages. The hardcover book was printed and bound in China.

There are 500 limited edition copies, priced at $150, that are numbered and signed by Johnson and Robinson. The iBook version available ($29.99) features interactive maps and stunning photography.