2013 will be a record harvest for Washington wine

Though the last few hundred tons of grapes are still coming in the door, the 2013 vintage will undoubtedly be the largest in Washington wine history.

Wineries around Washington are telling Great Northwest Wine that they have brought in more grapes than they did in 2012 – which was a record 188,000 tons.

The most telling statistic is from Ste. Michelle Wine Estates, owner of Chateau Ste. Michelle, Columbia Crest, 14 Hands and several other Washington wineries. The company, which takes in about two-thirds of all Washington wine grapes, said its production will be up at least 10 percent this year.

That means the Washington industry could crush as much as 220,000 tons this year.

Corliss said he expects the company to wrap up its harvest by Monday or Tuesday. He noted that Wednesday morning’s frost across much of the Columbia Valley likely brought an end to the growing season. Temperatures around Red Mountain were below 30 degrees, and Corliss reported temperatures as low as 24 in the lower areas of the Yakima Valley.

Corliss said that with 91 percent of Ste. Michelle Wine Estates’ grapes in the door, the crop is within 1 percent of estimates made in August.

“We’re not seeing any big surprises as far as yields being up or down,” he said. “We’re pretty close to what we thought we were going to get.” 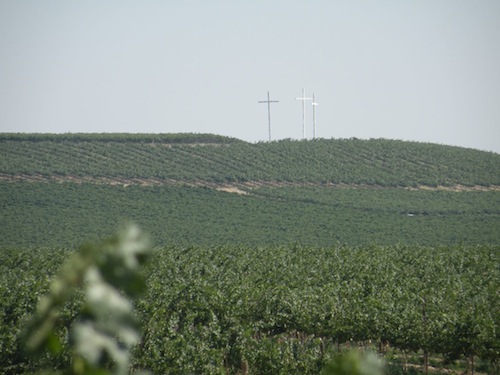 He said the growth stems from new vineyards coming into production, particularly in the Horse Heaven Hills and on the Wahluke Slope.

“Those are the areas we’ve been trying to expand,” he said. “They are well suited for red varieties.”

Corliss reported Merlot and Syrah came in slightly ahead of projections, while Cabernet Sauvignon was a little light.

He said the large increase in production can be tracked to 2010, when a sudden freeze just before Thanksgiving in the Horse Heaven Hills knocked many young vineyards back to the ground. As a result, they did not reach full production until this season.

In Richland, Rob Griffin of Barnard Griffin reported that he brought in about 900 tons of grapes this year, up perhaps 15 percent over 2012. His last grapes in the door were 3.5 tons of Tannat, a red French variety that is becoming famous in Uruguay. He isn’t quite sure what he will do with it, as he’s never worked with the variety, which known for its massive tannins.

Griffin said he is pleased with the quality he has seen so far, though it’s far too early to make any kind of assessment of the vintage. He said he once expected to add a acidity in the cellar because of this year’s heat, but it turned out he used little.

“The wines don’t seem to be lacking in acidity,” he said. 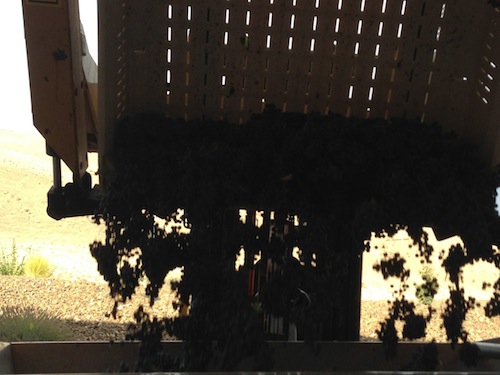 Wine grapes are sent into the crusher at Col Solare on Red Mountain. (Photo by Niranjana Perdue/Great Northwest Wine)

Across the Columbia River, Kent Waliser of Sagemoor Vineyards said he has 200 tons of Cabernet Sauvignon left to pick.

“Just a couple of easy days,” he said.

He estimates his crop will be perhaps 2 to 5 percent lower than last year. The primary culprit is Riesling, which is in oversupply. Waliser said he cropped his Riesling lower in anticipation of needing less of it. He said Merlot also came in slightly lighter than expected.

Waliser and his team harvest about 4,300 tons of wine grapes each year.

In the Horse Heaven Hills, Mike Andrews of Coyote Canyon Vineyard is just wrapping up harvest. He said he has 14 semi loads of red grapes left to bring in, primarily for Ste. Michelle Wine Estates, as well as a bit of Grenache that will be harvested by hand.

Andrews said his vineyard yield is slightly less than last year, and he is pleased with the fruit.

“This is one of the best we’ve ever had in quality and quantity,” he said.

Charlie Hoppes, owner of Fidelitas Wines on Red Mountain, finished harvest a couple of weeks ago and has wrapped up all of his fermentations.

“There’s no reason for me to be here every day anymore,” he said. “I’m not too upset about that.”

He brought in quite a bit less fruit this fall, primarily because his focus is on Red Mountain, so he has cut back on other vineyard sources.

“Our product line is changing quite a bit,” he said.

He noticed that the vineyards he worked with – including his own estate vineyard on Red Mountain – were producing significantly lower yields. He noted vineyards that normally yield 4 tons per acre came in at 3.25 instead. He attributes that to high summer heat, which stunted fruit development.

Not that he’s complaining. The juice-to-skin ratio is lower, thus giving the resulting wines more color, flavor and complexity.