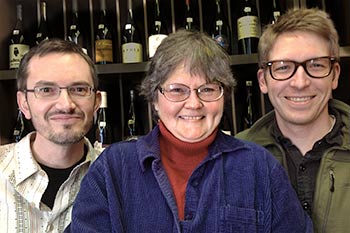 CORVALLIS, Ore. – After 26 years, one of the Pacific Northwest’s most innovative and prolific wine merchants is changing course and helping wineries learn how to meet the needs of an increasingly digital audience.

Jean Yates has sold her iconic Avalon Wine Inc. and will launch a marketing company that will assist wineries in reaching more customers through the Internet.

“I’m really interested in strategy and big changes that are coming and what wineries need to do to keep that edge,” Yates told Great Northwest Wine.

For Yates, visualizing the future of digital technology is second nature – it’s what she’s been doing for more than 33 years. After graduating from Duke University, the North Carolina native moved to Silicon Valley. It was a time of exploration for the nascent computing industry, and Yates embraced the culture and technology.

“It was exciting times,” she said. “It was back when Steve Jobs and Woz (Steve Wozniak) were coming by the Computerland store I was working at and showing off the Apple II.”

She also fondly recalls spending a few days on a junket with Microsoft founder Bill Gates while she was working on the UNIX operating system in its early days.

For six years, she ran a market research business and wrote one of the first books about UNIX, an operating system that became the backbone of the Internet. After selling her business to a large corporation, she traveled the world for a few months before finding the need to settle down again.

“For some people, that would be phenomenal,” she said. “But it wasn’t for me.” 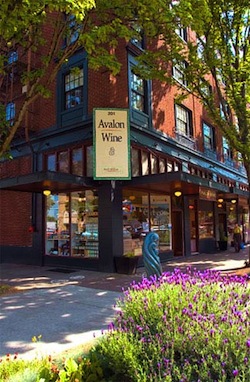 Avalon Wine is in downtown Corvallis, Ore., and has been one of the Northwest’s most progressive online wine shops. (Photo courtesy of Avalon Wine)

She wanted to continue to live near an academic community, so she sold her home in Palo Alto, Calif., and moved to Alpine, Ore. She didn’t know a lot about Oregon wine – yet.

She began to make herb wine vinegar that she sold at the farmers market in Eugene.

When she grew tired of hauling her goods around the southern Willamette Valley, she purchased Marquette Herbs, a gift shop in nearby Corvallis. Almost immediately, she transformed the business, adding a deli and espresso bar and selling Oregon-made gourmet foods and crafts.

“From the beginning, I had a shelf of Oregon wine,” she said.

It didn’t take long for the wine offerings to expand – and her interest in the young Oregon wine industry to take off. Over the next decade, she transformed herself from someone who was an expert in writing code to a source of knowledge about Northwest wine.

By the mid-1990s, the World Wide Web was beginning to gain traction, and Yates was one of the first wine merchants to recognize its potential.

“From the beginning, I wanted to create a site that was about Oregon and Washington wine,” she said.

Long before the term “search engine optimization” was invented, Yates was writing articles about wineries, winemakers, grape growers and wine pairings in an effort to attract an audience. This was before most wineries had websites, much less realized their importance.

As a result, Yates was well ahead of other wine retailers in selling online. Indeed, nearly all of her Oregon wine sales were a result of the site.

“The Corvallis business was a small part of what we did,” she said.

Yates also got to know all the big players in the Oregon wine industry and became a trusted source of sales. She was taking groups of wine lovers to Ken Wright Cellars for barrel tastings soon after the iconic Oregon winemaker left Panther Creek Cellars.

“I had a Patricia Green wine club,” she said. “I really enjoyed that because I love her wines.”

A big key to her success was developing email lists of wine lovers who not only wanted information about wineries, but also access to the wines.

“We were sending out email around 2000,” she said. “Back then, there weren’t email companies like MailChimp and Constant Contact.”

Now, she’s leaving that all behind. In October, she sold Avalon to two longtime employees, Marcus Looze and Andy Osterhaus.

“My impetus was I wanted to move on and try something different,” she said. “I’m happy because I didn’t have to close Avalon, so it didn’t just disappear. Andy and Marcus will take Avalon Wine to the next level, beyond anything it has done so far. I am excited to watch their success.”

Looze and Osterhaus are relocating Avalon to Portland on Sandy Boulevard near the airport. It will share a building with a couple of wineries, a coffee shop and a restaurant.

Yates has taken a little time to do one of her favorite activities – hiking – but has quickly dived into her new business, called Oregon Wine Marketing. Already, she has a few clients who are counting on her expertise with selling wine. Her new website, www.oregon-wine.com, will launch this month.

She also plans to get back into publishing, putting her experience in ebooks that show how wineries can improve sales.

And her No. 1 tip to wineries?

“Put your phone number in a large font in the top-right corner of every page of your website,” she said. “Right below it, have an email sign-up box.”

She said this is the biggest mistake most wineries – and other small businesses – make.

“Connect with customers,” she added. “And make sure they can connect with you.”