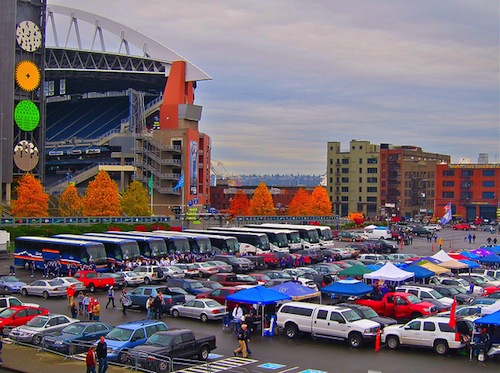 It’s a big football weekend in the Pacific Northwest, with the Cougars vs. Huskies, Beavers vs. Ducks and Saints vs. Seahawks. Here are some wines to take to your football parties. (Photo via Flickr/click for credit)

With three important football games being played in next four days in the Pacific Northwest, it’s time to think about what wines you will open as you root on your team.

Today is the annual Apple Cup between the Washington State University Cougars and the University of Washington Huskies. Kickoff is at 12:30 p.m. at Husky Stadium in Seattle. The game will be broadcast by Fox.

After that is the Civil War between the Oregon State University Beavers and the University of Oregon Ducks. Kickoff is at 4 p.m. at Autzen Stadium in Eugene. The game will be broadcast on Fox Sports 1.

And on Monday night, the Seattle Seahawks (10-1) square off before an ESPN-TV primetime national audience against the New Orleans Saints (9-2). Both NFC powerhouses are in first place in their divisions, and this game will help decide who get homefield advantage throughout the conference playoffs. Kickoff is at 5:30 p.m. at CenturyLink Field in Seattle.

So here are some wines we picked out for you to consider, whether you are tailgating at one of these games or enjoying the action from your living room.