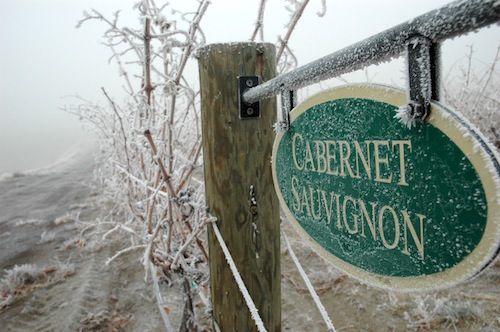 Frost clings to a sign in a vineyard on Washington’s Red Mountain. Temperatures are expected to drop into single digits this weekend in Washington wine country. (Photo by Andy Perdue/Great Northwest Wine)

As the weather in Washington wine country gets downright frightful, wine grape growers are keeping a close eye on the health of their vines.

But most aren’t too worried at this point.

“I haven’t seen any numbers that concern me,” said Kevin Corliss, director of vineyard operations for Ste. Michelle Wine Estates, which uses two-thirds of all the grapes in Washington. “I’m watching them like a hawk. Everything is staying above zero.”

According to Washington State University, the most tender variety in Washington wine country – Petit Verdot – won’t sustain any kind of bud damage until temperatures dip below zero. Important varieties will be able to handle even colder temperatures:

Weather forecasts put lows in the Yakima Valley at 7 degrees above zero Saturday night and warming up to lows above freezing by midweek. In the Walla Walla Valley, temperatures could reach as low as 5 degrees above zero. 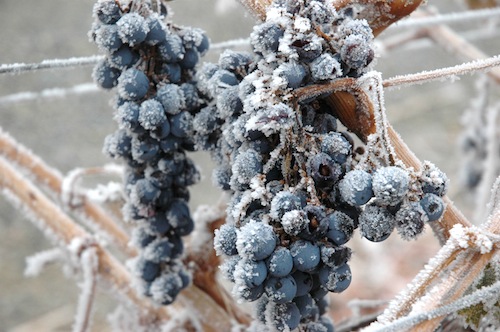 A few leftover grapes pick up specks of frost in the Yakima Valley. (Photo by Andy Perdue/Great Northwest Wine)

Norm McKibben, who owns and manages several vineyards in the Walla Walla Valley and owns Pepper Bridge Winery, is unconcerned.

“The cold is not hurting us a bit,” he said. “In fact, if it stays above zero, it helps the vines harden off (for winter). Right now, I’m happy.”

McKibben said wind chill doesn’t affect grapevines, so even if the wind causes the air to feel colder, it won’t hurt the vines.

Kent Waliser, general manager of renowned Sagemoor Vineyards along the Columbia River north of Pasco, checked some vines in a cold area of one of his vineyards after the first cold snap last week.

But that doesn’t keep him from being diligent about watching the weather forecasts.

“We’re always concerned because cold weather at the wrong time is one of the risks we face with grapes in Washington,” he said. “It always makes you nervous, but I think we’ll skate by.”

Every five to eight years, Washington’s Columbia Valley deals with a winter weather event that can damage vineyards. Typically, this happens when temperatures rise to an unseasonably warm level, such as 60 or 70 degrees, then plummets below freezing. The warm temperatures signal the vines to wake from their winter slumber, which gets sap flowing. Then the following cold snap can cause mild to catastrophic damage to different parts of the vine.

In 1996, sustained cold temperatures caused widespread damage to Washington vineyards, with more than 40 percent losing their entire crop. In 2004, the Walla Walla Valley was hit hard, losing as much as 80 percent of the vineyards for a year. The most recent event was in November 2010, when temperatures dropped to minus-6 in the Horse Heaven Hills. Many vineyards, including Champoux, Coyote Canyon and Andrews suffered heavy damage.

Waliser doesn’t expect this kind of damaging event because temperatures since late October have dropped steadily, giving vines the opportunity to prepare for winter by becoming dormant.

He is mildly concerned about an acre of Grenache he planted this year. Because it’s so young and is a tender variety, the vines are more susceptible to sub-freezing temperatures.

“Those kinds of plants get kind of beat up because they’re young,” he said.

Todd Newhouse, a third-generation grape grower on Snipes Mountain near the Yakima Valley town of Sunnyside, hasn’t checked his vines for damage but isn’t too concerned.

“Most varieties should still be OK until the temperatures get down below zero,” he said. “I’m optimistic.”