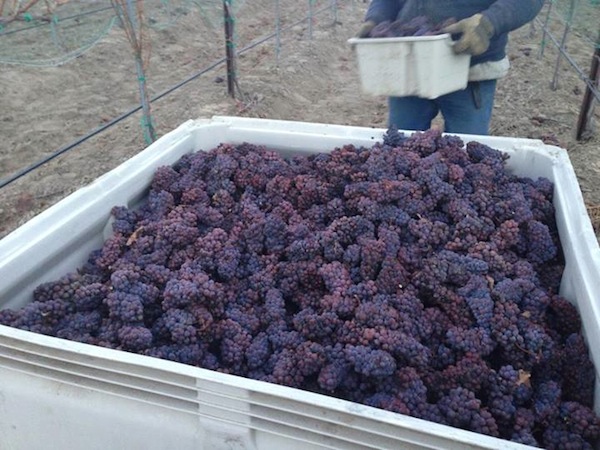 ROYAL CITY, Wash. — It took several years and a long stretch of cold temperatures in Washington state, but Aryn Morell will be making a Pinot Gris ice wine for Gård Vintners.

“This is the first time we’ve actually got it to freeze,” Morell said Monday after a reported overnight low of 7 degrees Fahrenheit. “We harvested Riesling for ice wine on Friday, but the Pinot Gris was only 55 or 60 percent frozen, so it needed the weekend to get it freeze completely. We’re not going to make an ice wine by taking it and putting it in a cold room.”

The sugar level of this lot of Pinot Gris from Lawrence Vineyards stood at 52.6 brix, which required extended single-digit temperatures to achieve a complete freeze, Morell said. That’s compared with Riesling, which winemakers in British Columbia and Washington often will harvest at around 45 brix.

The vast majority of ice wine made in the Northwest is from Riesling. Pinot Gris occasionally is made into dessert wine by cryogenically freezing the grapes, it’s rather rare to see it made in a true ice wine fashion.

“It’s difficult to ferment,” Morell told Great Northwest Wine. “When you get more sugar accumulation, it is more difficult to get it freeze.”

When it comes to Riesling, the Lawrence family site in the Frenchman Hills excels with that Alsatian variety, too. In fact, Josh Lawrence’s Riesling is a steady contributor to Eroica — Ste. Michelle’s renowned collaboration with famed German winemaker Ernst Loosen.

“Ste. Michelle thinks so highly of his vineyard that they give him an acreage contract for Riesling, which is something they rarely do,” Morell said. 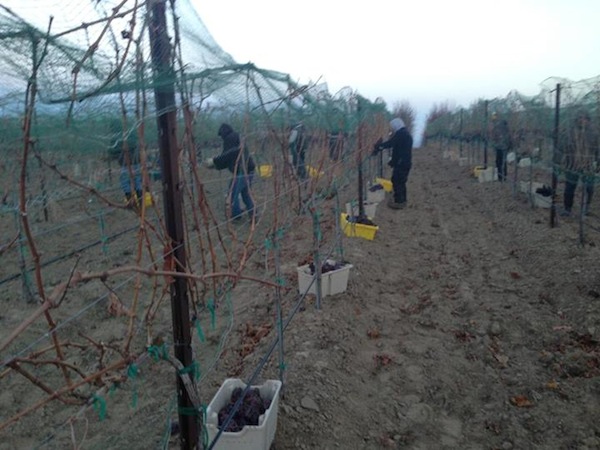 Elevation is a key feature for Lawrence Vineyards, the 10-year-old estate plantings of Gård Vintners, which is owned and operated by Josh Lawrence and his family. It is one of the state’s highest sites at 1,675 feet, overlooking Royal City with the Saddle Mountains and the Wahluke Slope to the south.

Morell said he’s been encouraging Lawrence to set aside a block of Pinot Gris within Corfu Crossing Vineyard for ice wine production since he took over making the wines for Gård in 2011. He’s convinced the Pinot Gris he bottles from Lawrence is at least equal to the quality of the Riesling.

“I think we’ve proven that with the Grand Klasse, both from the reaction of consumers and critics, who see them about the same,” said Morell, who also makes wine for Matthews Winery, Tenor and his own Alleromb label in Walla Walla. “It was the highest-rated Pinot Gris in Washington from Robert Parker, and (Steve) Tanzer rated it about the same, so in my opinion the Pinot Gris is slightly better than the Riesling.”

When it comes to ice wine production, Riesling has a bit of advantage in terms of lower pH and higher acidity than Pinot Gris.

“With ice wine, you have the ability to get the acidity back in during the pressing,” Morell said. 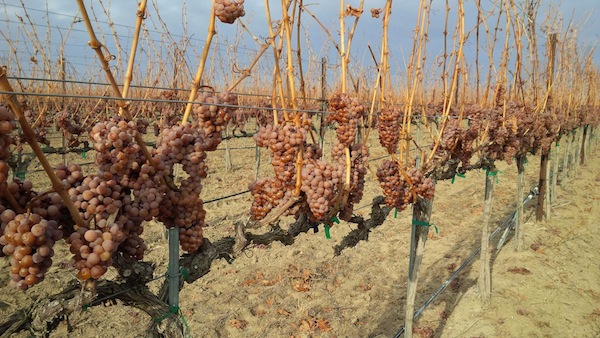 On Friday, Lawrence picked the block of Riesling he set aside for ice wine.

On Monday, the conditions were prime for the Pinot Gris, which normally is cropped to 3 tons per acre. By this time of year, Mother Nature’s cut is beyond usury despite the netting of vines.

“We lost a third of the fruit to the conditions, then there’s bird damage and berry shrivel, so effectively you’ve got 1 ton from what was originally 3 tons of fruit,” Morell said. “Last year, we didn’t pick ice wine until January, so there’s more fruit to pull off this time.”

And Lawrence maintained his spray program every 7-10 days to discourage widespread botrytis, so there will be minimal botrytis affect seen in the Pinot Gris ice wine.

Morell admits this is an uncharted course with Pinot Gris, which came from Clone 1 and Clone 9 fruit in Corfu Crossing Vineyard.He has produced Riesling ice wine for the Lawrence family — the 2012 will be released this winter — so he’s got his fingers crossed that he can achieve enough fermentation to finish at 11 percent alcohol.

If it matches the profile of the critically acclaimed 2010 Riesling Ice Wine,  the residual sugar could be slightly north of 20 percent.

“With these kinds of sugar levels, it will be much more difficult to start fermentation,” Morell said. “We’ll start with the slow inoculation that will might take about a week to start. Reasonably, I hope that it will be finished about a month from today, but maybe it will shock me and go quicker than that.”

“We finished at 55 gallons per ton and 47.1 brix,” Morell said via email. “We allowed some ice to melt to bring the brix down and to increase our yield, otherwise we would have been around 40 gallons per ton. Both clone 1 and 9 were used, although it was mainly clone 9. Starting tonnage was 4.5 tons with the finishing yield effectively equal to 1 ton fresh.”

The amount of concentrated Pinot Gris juice matched that of the Riesling he worked with Friday.

“Theoretically, this should be just as good as the Riesling, but we’ll see at what level this performs,” he said. “It’s a bit of an unknown for us, so it’s hard to speculate what we’ll do in the future, but that’s the nice thing about working with estate vineyards. You get to decide.”

Gård Vintners operates tasting rooms in downtown Ellensburg and the Woodinville Warehouse District, but these 2013 ice wines probably won’t be available until February 2015.