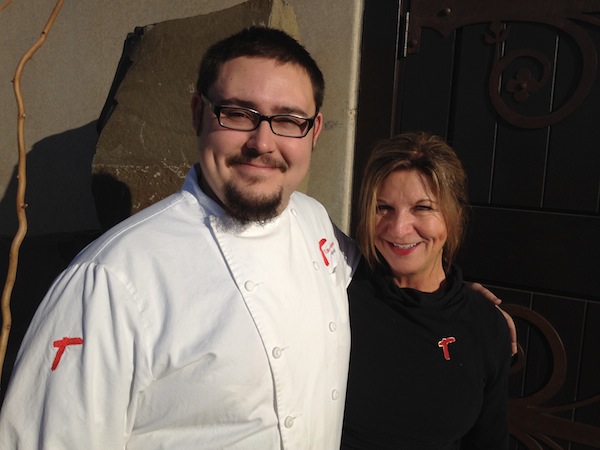 Executive chef Joshua Duquist and Tagaris President Penny Morgan have reason to smile after the recent acclaim for their restaurant in Richland, Wash., by the food and travel site Zagat.com. (Photo by Eric Degerman/Great Northwest Wine)

RICHLAND, Wash. — Washington state’s Columbia Valley has earned a worldwide reputation for its wines rather than restaurants, but Tagaris Winery in Richland has begun to change that, according to Zagat.com.

The Google-owned producer of food and travel guides recently published an online feature headlined “8 Wineries with Fabulous Food,” and Zagat placed the Tri-City winery among some famous company. Tagaris was one of three Pacific Northwest wineries to make that elite eight.

“There’s Ferrari Winery in Italy, Etoile at Domaine Chandon in Napa, Mission Hill in British Columbia, King Estate in Oregon and then I saw Tagaris,” said Penny Morgan, President of Tagaris Winery and Taverna Tagaris. “I thought, ‘This just can’t be! This is not just a local list.’ ” 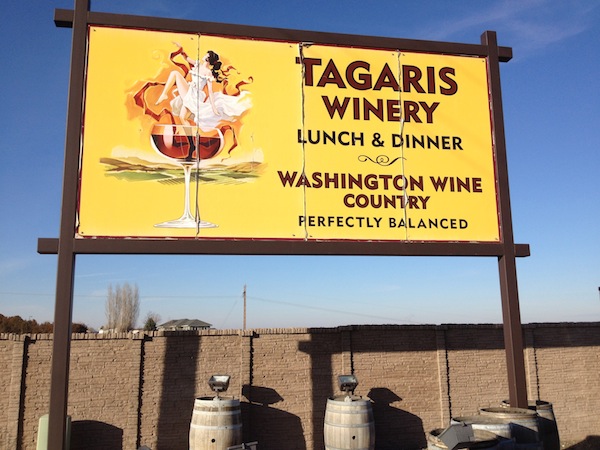 More travelers along Interstate 182 will be looking for Tagaris Winery in Richland, Wash., after a recent review by the food and travel site Zagat.com. (Photo by Eric Degerman/Great Northwest Wine)

“What Zagat does is put rankings on places where people spend their money on a worldwide level,” said Sondra Wilson, president of Travel Leaders Tri-Cities. “Millions of people go onto their website to decide what they are going to do, so now they have a crack at getting some of this business. This serves as recognition that Tagaris is running an establishment that’s world-class.”

Morgan said she believes the recognition from Zagat will be spread from beyond her own restaurant and wine program.

“When someone from Seattle and beyond, someone from the East Coast or Europe wonders what is Washington wine country and Ste. Michelle all about, they go to a Zagat review and they’ll discover the wineries on Tulip Lane — Tagaris and Barnard Griffin and Bookwalter — and in Prosser and Woodinville. I think of it as a pebble in the water, it will spread out across the state.” 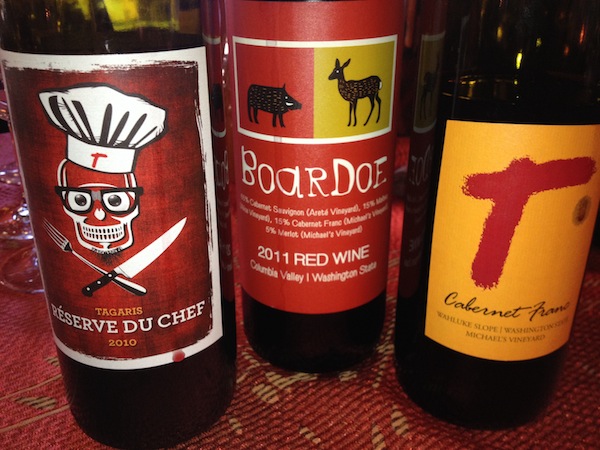 Tagaris winemaker Frank Roth creates wines that are fruit-forward to pair with the award-winning cuisine of chef Joshua Duquist at their on-premise restaurant in Richland, Wash. (Photo by Eric Degerman/Great Northwest Wine)

Linnea Covington, a Brooklyn-based food and travel writer who contributes to Zagat.com, complimented Tagaris executive chef Joshua Duquist and his team not only for featuring local ingredients but also on how they incorporate estate wines into the menu.

“Each menu item suggests a wine to go with food, and though some blends you may be unfamiliar with, like their Syrah-heavy Red Roan, Cabernet Sauvignon-focused Boar Doe and varietals like Cinsault and Counoise, the helpful staff will certainly fill you in,” she wrote.

Duquist, a native of nearby Pasco who trained at Western Culinary Institute in Portland, Ore., said he recalled Covington as a guest but had no inkling that she was a food and travel writer from the East Coast.

“We like to treat people like family, and I try to hit every table at some point,” Duquist said. “I spent three years owning my own restaurant and somehow developed a knack for remembering people and what they ordered. She seemed like a really nice lady.” 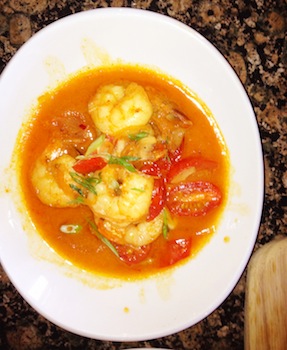 Covington first spotlighted the tapas Duquist creates at Tagaris, listing the Patatas Bravas, Sautéed Shrimp in Spice Garlic Butter and Greek-style Chicken Skewers. He also impressed her by caramelizing onions in Cabernet Sauvignon for the cheeseburger and creating a white wine butter sauce for the clams and chorizo plate.

The Greek influence comes from owner Michael Taggares, a longtime Columbia Valley fruit grower who founded the winery in 1987. Mike, whose father is Othello potato mogul Pete Taggares and brother is a former University of Washington football star, developed 450 acres of vines along the Wahluke Slope near Weinbau Vineyard and Conner-Lee Vineyard near Othello. Most of the Tagaris grapes are sold to Ste. Michelle Wine Estates, Hogue Cellars, Milbrandt Vineyards and Barnard Griffin, with organic grapes going to Badger Mountain and Snoqualmie, Morgan said.

Tagaris wines are made by Frank Roth, who resigned in 2005 after 10 years as cellarmaster at Barnard Griffin to head up the winery for Morgan — his aunt. He builds the Tagaris wines with the restaurant in mind, creating them in a fruit-forward style with minimal oak, high acidity and low alcohol. They long have complemented the Northwest ingredients used by the chefs at Tagaris.

“The young man likes to eat,” Morgan chuckled. “Food is high on Frank’s radar screen, and he’s quite a good cook himself, so he’s heavily interested in the culinary side. There’s a wonderful synergy between Frank the winemaker and Josh the chef. Josh gets the privilege of helping Frank build the wines and tastes through the wines. There’s a balance between the two of them, and we try to present that to our guests. It’s beautiful to watch them.”

“Wine tourism and culinary tourism go together so perfectly, and clustering has proven to be a successful marketing effort,” Morgan said. “It’s been proven in Prosser, proven in Woodinville and proven in Walla Walla.”

Morgan and her team are buzzing with excitement and the anticipation of what the publicity juice from Zagat could mean.

“I can speak for my own boss in that when he wants to go to a country, he goes to the bookstore and he buys the Zagat guide for that country,” Morgan said. “Then, with the guide in hand, he decides on a tour route and where to stay and where to dine and where to sleep — based on the Zagat.”

Nearly two months have passed since Morgan first learned of the recognition. It came on a Sunday evening via a subtle page link forwarded to her by a family friend. Now, her advertising strategist is poised to help spread the news.

“Zagat has a protocol and detailed guidelines on how someone like Tagaris can use the Zagat logo and quote from their publications,” Morgan said. “We are now authorized to do so, and we’ve been advised to include these comments on all of our advertising from now on. Everything that leaves Tagaris needs to be emblazoned with this information. All letterhead, logos, magazine advertising will have this embedded from here on out.

“My goal with this great gift we’ve been given — OK, we’ve earned it — has been, ‘If we were Ste. Michelle, how would they run with this ball?’ ” she added.

Wilson, a travel maven with offices at both ends of the Yakima Valley, said it’s a great problem to juggle.

“This started with a blind tasting from a food expert in New York who walked in and went ‘Wow!’ You can’t pay to have that happen, and it happened here,” Wilson said. “It gives you an opportunity to be a playing on a field with some of the best places in the world, so good on them. I’m excited for them.”