ASHLAND, Ore. — Southern Oregon vintners wouldn’t want to relive those rainy weeks of this year’s harvest, as climatologist Greg Jones described in his recent report, but winemakers seem pleased with what’s in the barrel from the 2013 vintage.

“I think overall this is the highest percentage of great wines in the barrel I’ve ever had, and because of that rain, the alcohol levels should be lower than what they would have been,” said Pat Spangler, owner/winemaker of Spangler Vineyards in Roseburg. “Some of the stuff I brought in, particularly from the Rogue and the Applegate, were pushing the upper end.”

Mark Wisnovsky, co-owner of Valley View Winery in Jacksonville, said “In essence, if you could not adequately ripen your fruit this year, you are probably growing the wrong variety in the wrong place. Overall, it was an excellent year for us and compared well to other excellent years such as 2002, 2003, 2006 and 2008.”

Meanwhile, the historic cold temperatures experienced in Southern Oregon during the first part of December has Wisnovsky worried about the health of vines and the 2014 vintage. His parents bonded Valley View in 1976.

“My gut feeling is there’s damage, maybe 10 to 20 percent loss,” Wisnovsky told Great Northwest Wine. “We’ve never had five to 10 days of extended time with temperatures that low when we have not had damage.”

Jones, professor of Environmental Studies at Southern Oregon University in Ashland, produces separate year-end reports for the Umpqua Valley Winegrowers Association and the Rogue Valley Winegrowers Association. His precise research for those groups dates to 2003, and he generates regular weather updates for the state throughout the growing season.

“Southern Oregon and the majority of the western U.S. experienced a generally warm and early 2013 vintage,” Jones wrote in his report. “However, the vintage will likely be most remembered for the dramatic shift to cool and wet conditions in late September, which challenged harvest decisions. While some harvested many of the early ripening varieties before the rains, those who waited to harvest did so in a record-breaking dry October, which provided a great ending to the harvest period.”

Those cooling rains, which began Sept. 17 and carried through to the end of the month, were the powerful tail end of a typhoon that began in the western Pacific Ocean.

“The result was 2-4 inches above-normal rainfall for September in Southern Oregon, making it the third wettest on record,” Jones said. “While October continued the cool trend from September, a blocking ridge of high pressure brought dry conditions resulting in the 9th driest October on record in Southern Oregon.”

“They were predicting that storm a week before it got here because you could see it move across the Pacific. They just couldn’t tell where the bottom of the storm was going to be,” Spangler said. “What it did was give the growers time to get things turned off.”

Spangler, who arrived in the Umpqua Valley in 2004, said he embraced that rain to an extent.

“I thought it was very important to get those rains because it slowed down a very hot year,” Spangler said. “I was concerned about ripening too fast, and I like longer hangtime. We were running four to five weeks ahead, so this gave the grapes a chance to take a rest, and our grapes turned out very good.”

Early-season varieties such as Sauvignon Blanc came in early, and Spangler brought in Merlot from the Walla Walla Valley in mid-September. Most varieties were far from ready for anything other than the base for sparkling wine.

“I did wait through the rain because in Southern Oregon you were looking at 21.5 to 22.5 brix, which was not ripe enough for what I want to make,” Spangler said. “It paid off big-time if you waited, which was a tougher decision at the time for some. You were taking a bit of a gamble, but it turned out gorgeous. I was willing to gamble. It was 22 brix on the 20th of September and I suppose you ran the risk of it still being 22 brix on Oct. 20, but I’m willing to take the extra month of risk. Why not it if was going to turn out the same?”

The bank of growing degree days and the latest trend of global climate change on the West Coast made it a good bet for winemakers like Spangler, a former floor trader on the Chicago Mercantile Exchange.

“The cool last two weeks of September and all of October resulted in GDD in Medford in 2013 that was roughly equal to that experienced in 2003, and the fourth highest observed during the 1928-2013 period,” Jones wrote.

Those 3,379 GDD compared with 2003 and 2006, Jones said. It also was up 15 percent from the cool vintage of 2011. Medford ended up with slightly lower heat accumulation than Milton-Freewater (3,466) and more than McMinnville (2,428) and Roseburg (3,170), which were all considerably warmer than their long-term averages.

In the Rogue Valley, “Grower comments tended to reflect the overall warmth of the vintage, with one comment saying ‘ideal season – give me more like this please,’ ” Jones reported.

He used data from six vineyards in the Rogue Valley to develop the average GDD of 2,638. The Bear Creek Valley station received 3,032 GDD, while the Illinois Valley, not far from the Pacific Ocean, recorded 2332 GDD. The Applegate Valley — home to Valley View Winery — is between the Bear Creek and Illinois valleys. 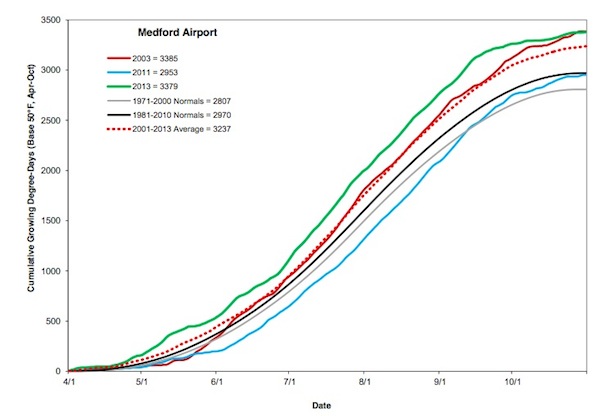 “Every wine we’ve made in 2013 is very good to excellent,” Wisnovsky said. “And if you look at the growing degrees days for our vineyard, it appears that we need about 2,600 (or more) degree days to make consistently excellent wines here in the Applegate. At 2,800 or higher is great for red, but not as good for the whites.”

In the Umpqua Valley, the data indicated a bit warmer season and was the fourth-highest recording from 1931 to 2013, comparing closely with 2003 and 2004. 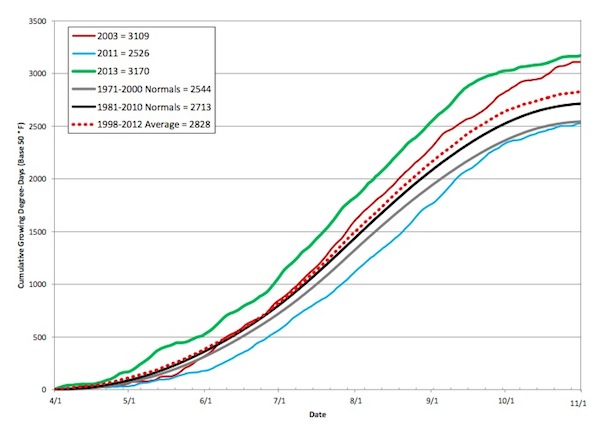 “The 3170 GDD is slightly higher (+2%) than the warm 2003 vintage, 26% higher than the cool 2011 vintage, and 17% greater than the 1981-2010 climate normals for Roseburg,” Jones wrote. “However, the Roseburg station had the highest increase over average GDD compared to the other three locations.”

In terms of sweltering heat, Spangler said he’ll remember for how steady the hottest days were.

“The heat spikes really affect the growth patterns of the vines, especially post veraison, which can create the cooked flavors I see in other climates,” Spangler added. “It was a very good summer here in terms of heat spikes.”

Umpqua Valley grower comments tended to reflect the overall warmth of the vintage, with one comment saying “lovely vintage, unfortunately some late rain to deal with, but overall wonderful.”

Spangler said, “The wines are spectacular, and I’m extremely happy,” Spangler said. “The colors are dark and the extra hangtime helped. I like picking when it’s 75 degrees out — not 95 degrees — which gives you wines that are more of a fruity nature.”

Two pests also made 2013 unforgettable for Spangler in his estate vineyards just west of Interstate 5 in Roseburg.

“It was the attack of the birds. I lost two-thirds of my Syrah and half of the Cab,” Spangler said of the voracious flocks of cedar waxwing. “We were actively try to keep them away. We had thousands of them here, even with my five propane cannons.”

And he’s hoping the latest stretch of historically frigid weather will help knock down another pest.

“Leaf hoppers were out of control. It was a nasty, nasty year for them, and I’d never seen them before,” Spangler said. “They suck the juice out of the leaves and suck the vigor out of the vines. I grafted over 2½ acres to Dolcetto, which I will be able to harvest three weeks earlier than Cab next year, and you could see the plants slow down as the leaf hoppers worked their way through the vineyard. All the people I talked to said it was the worst they’d ever seen.”

Spangler buys fruit from more than 20 vineyards throughout Oregon, ranging from the Walla Walla Valley, the Columbia Gorge, the Applegate Valley, the Rogue Valley and a site in the Illinois Valley near the town of O’Brien, just seven miles from California. He said the end result of the 2013 vintage reminds him of 2006, only this year wasn’t nearly as straight-forward.

On the other hand, the 2010 and 2011 vintages proved to be teaching moments for growers and winemakers.

“A couple things that struck us were how ‘average’ this year was even though we thought it was quite a bit warmer than ‘normal,’ Wisnovsky said. “It goes to show you that anecdotal evidence is not always the same as actual numbers and facts. We have been pretty cool these past few years and a ‘normal’ year felt abnormally warm.”

“The 2010 and 2011 years were tough growing years, back to back, and ’12 was more normal,” Spangler said. “If you made it through ’10 and ’11, then you tightened up your program. We had a lot of new people here (in Southern Oregon), and that reminded them they had to keep their vineyards in right shape. It was better in the long term for the industry.”

Keeping fermenters full wasn’t a problem during October for many wineries.

“Some years, a third of my fermenters never get touched,” Spangler said. “This year, I used them all, and I couldn’t take another delivery of grapes.”

The 2013 vintage also allowed for some atypical varieties to exceed expectations.

“There was one grower with quite a bit of Marsanne because it did very well,” Wisnovsky said. “You couldn’t ripen it an average year, but this year they knocked it out of the park.”