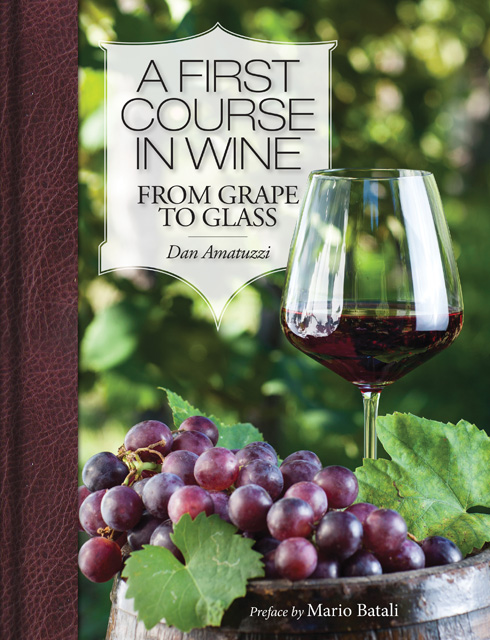 Many things Mario Batali touches turn into gold, so it makes since New York sommelier Dan Amatuzzi’s new book A First Course in Wine: From Grapes to Glass registers immediate attention by having the famed chef’s name on the cover.

Batali, a Seattle native whose father Armandino arguably is the godfather of the Pacific Northwest charcuterie movement, wrote the preface for Amatuzzi’s book from Race Point Publishing ($28).

And while the name of Mario Batali will get many to pick up the book, Amatuzzi’s educated and straightforward approach will keep the 224 pages turning while holding the attention of many wine lovers.

Wine director at Batali’s OTTO before taking over the beverage program at Eataly, Amatuzzi has become one of the country’s most recognizable young sommeliers. Last year, he earned a spot on Forbes’ 30 Under 30 for Food & Wine.

Amatuzzi has taken that background to present a thoughtful guide that’s easy to digest with knowledge that arms the reader for any trip to a winery, a wine shop or restaurant.

As a hardback, it is akin to a text book rather than a coffee table book. There are sections that provide insight on major grape varieties, winemaking, deciphering wine labels, tips on interpreting restaurant wine lists, sensory evaluation, concepts and approaches to pairing food with wine.

Along the way are handy anecdotes such as pointing out that while the average American drinker now enjoys one glass of wine per week, the consumption in France equals one glass per person per day.

Amatuzzi, like many millennial wine directors in the Pacific Northwest, has immersed his life into his career. It began as a college student when he spent a semester in Florence, Italy, and learned about winemaking. His career in the hospitality industry started off modestly — polishing stemware at Batali’s renowned Manhattan restaurant Babbo.

Dedication, combined with a desire to learn and lead, moved him up the ladder. By 2011, Zagat shined Amatuzzi’s star by naming him to its New York “30 under 30″ culinary talents. In his spare time, he earned an MBA from New York University and now serves as an adjunct professor there.

A First Course in Wine handles sensory evaluation dutifully and describes how wines can become spoiled. “If you encounter any of the above kinds of defects, return the wine to its source. Simply put, if you’re in a restaurant, inform the manager or sommelier that you believe the wine is spoiled.”

Amatuzzi addresses the issue of “a wine has legs,” pointing out that it is an indication of the level of alcohol in wine, rather than quality. And he also takes a refreshing approach in showing how consumers can begin to write their own reviews and think in terms of food pairings.

References to the Pacific Northwest are understandably few. In the first section of the book that describes the world’s major grape varieties, Oregon was mentioned for Pinot Gris and Pinot Noir. The only variety associated with Washington was Merlot — even though no other winery in the world produces more Riesling than Chateau Ste. Michelle.

As is often the case with East Coast wine professionals, Oregon has become prized for New World Pinot Noir.

“Other than Santa Barbara and pockets of Sonoma, Oregon is Pinot Noir country for the United States,” Amatuzzi writes.

He also accurately points out that “While Chardonnay once prevailed, Pinot Gris (Pinot Grigio) has become the darling wine grape of Oregon.” However, it is curious that within the same paragraph Amatuzzi lists Seyval Blanc as a variety grown in Oregon that’s worth mentioning. (That variety produces a blank page on the Oregon Wine Board’s website.)

And most in the Washington wine industry now would disagree with Amatuzzi’s statement: “As Oregon has taken to Pinot Noir, Washington’s wineries are hoping that Syrah will give the state a better global identity.” That was a dream about a decade ago, but much of that Syrah juice now contributes — behind the scenes — to many of Washington’s best proprietary blends.

He did take time to assert that the young Naches Heights American Viticulture Area, a sub-AVA of the Yakima Valley, is dominated by organic, sustainable or biodynamic farming practices. He also writes, “Columbia Crest, Seven Hills, Leonetti Cellar, Kiona, Cougar Crest and Chateau Ste. Michelle wineries all produce a wide range of wines that are great introductions to the wines of Washington State.”

It’s interesting to see that one of the three recommended websites — which includes Amatuzzi’s own blog — is The Wine Economist, which belongs to Mike Veseth, the recently retired economics professor at University of Puget Sound.

There is a rather alarming use of a pixelated watermarked and uncredited photo, purportedly of a Yakima County vineyard, within the Washington section for “New World Red Wines.” Such usage is likely not the fault of Amatuzzi, and it seems to be the only such photo in the otherwise adequately illustrated book.

A First Course is not Amatuzzi’s first book. He wrote Italian Wine for the Student when he was 26. His next published work for Race Point — How to Host a Wine Party — is a book/kit scheduled for release in February 2014.

In the meantime, A First Course in Wine also is available via Eataly.com and as a digital product.