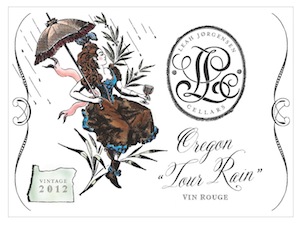 Leah Jorgensen’s early wines as a solo winemaker could portend great things ahead, and she has worked in nearly every aspect of the wine industry during her young life. Less than a decade ago, she arrived in Oregon to work for Erath. When that winery was purchased by Ste. Michelle Wine Estates, she moved to Washington state, then returned to Oregon to work for Adelsheim and a handful of others in marketing roles. All the while, she studied winemaking, both in textbooks and cellars. Perhaps recognizing that Oregon doesn’t necessarily need another small Pinot Noir producer, Jorgensen is focusing on Loire-style wines. This blend of Cabernet Franc (66%) and Gamay Noir (34%) is a delight from first whiff to the last tilt of the glass. The aromas of strawberry, golden raspberry, clove and cocoa powder give way to elegant flavors of red raspberry and bright cherry. The lighter structure is refreshing and invite pairings with smoked salmon, barbecued ribs, rotisserie chicken, spaghetti and meatballs or mushroom empanadas. On Oct. 8, it was selected as Wine of the Week by Great Northwest Wine.