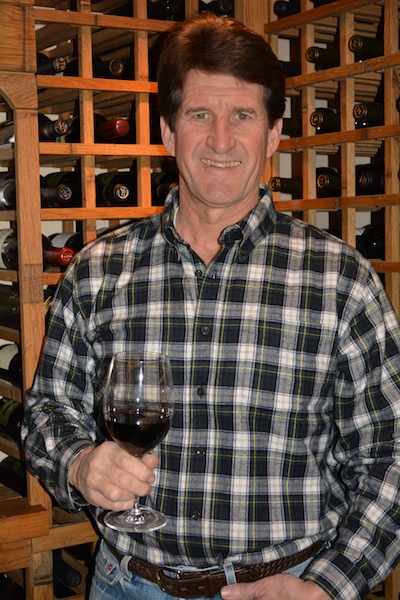 David Forsyth, a native of Ellensburg, Wash., produced two of the top 10 wines on Great Northwest Wine’s Top 100 wines of 2013. The Mercer Estates 2010 Spice Cabinet Vineyard Malbec, which Forsyth made, was selected as the No. 1 wine of the year. (Photo courtesy of David Forsyth)

PROSSER, Wash. – Three years ago, David Forsyth’s winemaking talents and the Mercer family’s foresight as farmers came together to produce brilliance in the Mercer Estates 2010 Spice Cabinet Vineyard Malbec ($30) from the Horse Heaven Hills, which ranks as the No. 1 wine on Great Northwest Wine’s Top 100 List for 2013.

It showcases a new variety for Washington state and a young vineyard, and both seem be on a meteoric rise.

“We knew it was a particularly nice wine, and I’ll leave it to everybody else’s interpretation what they think of it,” Forsyth said.

Rob Mercer planted the 18-acre Spice Cabinet Vineyard in 2005 overlooking Crow Butte Park on the southern edge of the Horse Heaven Hills. Its first commercial use, the 2008 vintage, went into blends. Next year, the juice demanded the spotlight as Mercer created vineyard-designate wines featuring Cabernet Sauvignon, Grenache, Petit Verdot and the Malbec.

“All those wines seem to be pretty well-received,” Forysth said. “What’s so amazing about that vineyard is that you could see its potential from the get-go. It’s this beautiful spot overlooking the river. It looked like a great site for growing grapes, but you never really know.”

Forsyth has gained experience with grapes from throughout Columbia Valley during his career in Prosser at Hogue Cellars, Mercer Estate and now Zirkle Fruit. While Red Mountain reds have gained acclaim for their power and the Wahluke Slope for jammy ripeness, the Horse Heaven Hills continue to burnish their reputation for balance.

“The wines are so nicely balanced,” Forsyth said. “That’s why I’ve always liked the Horse Heaven Hills. You’ve got balance and elegance and complexity.”

There’s more to Spice Cabinet than those four wines as other “ingredients” include Carignan, Cinsault, Counoise, Mourvédre, Petite Sirah, Sangiovese and Syrah. The Malbec might be showing the best at the moment.

Rob Mercer, who owns Mercer Estates, stands in Spice Cabinet Vineyard, which he planted in Washington’s Horse Heaven Hills in 2005.

“Malbec is well-suited for Washington state,” Forsyth said. “It’s got lots of color and not a lot of tannin – much like Syrah, which also has high color and low tannin – but it’s much more interesting than Syrah. What’s remarkable about that vineyard is that all those wines coming off it are so different, from the Cab to Petit Verdot to the Malbec to the Grenache. It’s amazing just how well they all perform and that they all perform in different ways.”

Forsyth came to be one of Washington’s first home-grown winemakers, although he didn’t foresee his destiny when he graduated from Ellensburg High School in 1978 and later Central Washington University.

“I was a ski bum in Sun Valley for three years and was sitting on the chairlift when I got the crazy idea of being a winemaker,” Forsyth said. “I had a little bit of a science background and a little bit of an art background, and the idea appealed to me.”

His introduction to the world of wine came courtesy of the ski area’s renowned Atkinsons’ Market.

“I told the clerk I wanted a couple of bottles of wine. He said, ‘Try this Chardonnay. it’s a white wine, and this Cabernet – it’s a red wine.’ I took them home, opened up the wines and opened up the books. I thought to myself, ‘This tastes good, and I think I can do this. Then it all fell into place.”

As luck would have it, one of his final students as a ski instructor was Napa Valley winemaker Hamilton Vose III, who sold his winery and later his Mount Veeder vineyard to Chateau Potelle.

“He said, ‘Come on down, work for me and stay in my place,’ Forysth recalled. “I worked for him the whole time I was working on my master’s degree at U-C Davis, so I was getting my academics as the same time I was working in the wine industry. It was a great place to work, and I was pretty fortunate.”

In 1984, he returned to his home state and began at Hogue Cellars where he would work alongside such winemaking talents as Rob Griffin and Wade Wolfe. He served as Hogue Cellars’ lead winemaker from 1991 to 2006 before helping launch Mercer Estates with Mike Hogue.

That same year, Forsyth and his wife, Suzie, created their Forsyth Brio label. And the Forsyth Brio 2006 McKinley Springs Vineyard Cabernet Sauvignon earned the No. 10 slot on the Great Northwest Wine top 100 list.

“It’s a jaw-dropper,” Forsyth said. “This year, we processed about 10,000 tons, which probably makes us about the third- or fourth-largest winery in Washington.”

His clients include Chateau Ste. Michelle and, ironically, Hogue Cellars.

“The Zirkles are a large fruit-growing family with a packing house for apples and cherries,” he said. “They also own one of the largest vineyards, Indian Wells Vineyard, and they have some new plantings in the Horse Heaven Hills. They are a very progressive family, and I enjoy working for them.”

“I started working there with the 2012 vintage, and the plant is right next to Mercer and down the road from Hogue, so I haven’t moved very far,” he said with a chuckle.