Westport Winery, which is eight miles from the central Washington coast, will release a line of ciders in late January. (Photo courtesy of Westport Winery)

ABERDEEN, Wash. – More Northwest wineries are getting into the burgeoning cider business. Now one of Washington’s most progressive wineries is launching a line of ciders.

Westport Winery near the Grays Harbor town of Aberdeen will release three ciders at the end of this month, said owners Kim and Blain Roberts. It will be called Vineyards by the Sea Cider.

The couple’s daughter, Carrie, is overseeing production of the 294 cases of cider, working with her brother, Dana, who is the 6,000-case winery’s director of winemaking.

“It’s been really cool for them to work together,” Kim Roberts told Great Northwest Wine. “It’s made them closer, and they’re pretty close already.”

She is making three styles: a pure hard apple cider, an apple-cherry cider and a caramel apple cider. They will be packaged in 750ml bottles – just like wine – and will retail for about $20. 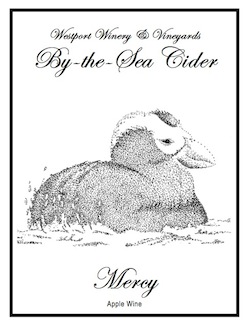 Proceeds from the wine will benefit Mercy Ships, a Texas-based organization that provides medical service on ships along the coast of Africa. While each of Westport’s 33 wines benefits nonprofits in Grays Harbor County, the Roberts family felt moved to find a way to support Mercy Ships after watching a show on television about how Dana Perino, former White House press secretary, was joining Mercy Ships.

“Our community has needs,” Kim Roberts said. “But the world has big, big needs.”

“Those are the things we value,” she said.

The family is bringing in apples from another grower, though it has planted many apple trees and one day hopes to produce an estate cider. The ciders Westport is making are higher than 6 percent alcohol, so it is technically classified as a wine.

Kim Roberts said the cider-making process is much faster than winemaking.

“It almost feels like making beer,” she said. “It’s a different breed of cat.”

All of the ciders will be sold directly through Westport Winery.