“My scientific sense, and gut feeling, is for a cooler-than-normal second half of winter, with normal precipitation and snow, but nowhere near enough to catch up in most places,” the Southern Oregon University professor wrote in his first weather update for 2014.

“Currently, areas across the West are running from 5-25% of normal rainfall/snow for the winter, and time is running short on catching up,” Jones wrote. “The U.S. Drought Monitor currently has much of California, Nevada and Idaho, and increasingly more and more of Oregon and Washington crossing into moderate to severe, short to long term drought.” 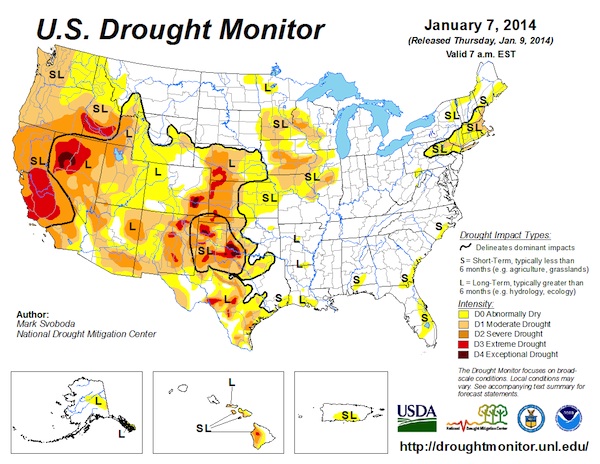 The monitor, which was updated Jan. 7, shows the Columbia Valley and the Idaho Panhandle in “abnormally dry” conditions. The rest of Washington and much of Oregon are struggling under “moderate drought.” Southeast Oregon and much of northern California are categorized as “severe drought.”

Idaho’s Snake River Valley and Central California have been labeled as “extreme drought.” A portion of Nevada and pockets of the Midwest are languishing under the most severe “exceptional drought” conditions.

Next month, Jones is scheduled to present his latest findings, predictions and annual report to the Oregon Wine Industry Symposium in Portland. The Pacific Northwest drought no doubt will be a primary topic.

“Spring will likely be slightly cooler than average and a little late, but not dramatically late,” he wrote. “Another 30 days of observations on the jet stream, air flow, and sea surface temperatures should fine-tune this forecast.”

According to Jones, the La Nada conditions that created the wild weather pattern during much of 2013 might not change until the time when winemakers in the Pacific Northwest begin harvesting their 2014 grapes.

“The current Climate Prediction Center observations and models continue to indicate that ENSO-neutral or La Nada conditions will persist into the Northern Hemisphere summer of 2014,” he wrote. “Combined with somewhat-cold North Pacific coastal waters, we are likely to see a little bit of everything this winter as evidenced already by the record-setting wet September followed immediately by a long spell of dry weather in October then a record breaking cold period in December.

“Large variability in month-to-month weather is common in years where there is no clear signal in the tropical Pacific,” he continued. “However, there is an increasing chance for the development of El Niño into next fall, but that will not do us any good now.”

Jones, who heads up environmental studies at the Ashland university, described this as a “wacky winter.” And it has only exacerbated the problems that the Pacific Northwest and California wine industries deeply concerned.

“Thanks to a relatively cool but continued dry first half of winter, 2013 ended as the driest year ever in California and across many areas of Oregon,” Jones wrote. “Many of these records were not just broken, but obliterated by as much as half of what precipitation is received on average in many locations.”

This weekend’s weather system is expected to make for difficult driving conditions and play a role in today’s National Football League playoff game in Seattle.

“Over the past few days and the next few days, a pretty normal-looking West Coast storm pattern has and will continue to develop, which will likely bring some sorely needed rains and mountains snows,” he wrote. “However, short-term models show a flip-flop back to the blocking ridge and then the potential for a longer-term shift to a more normal winter storm pattern.

“But I will believe it when I see it!” he added. “Extended out to 90 days, the Climate Prediction Center forecast does not have much guidance, showing an equal chance for slightly above to slightly below temperature and rainfall conditions throughout the West.”

Jones also noted the recent extreme cold that’s plagued much of the country has been misidentified by many.

“Contrary to what appeared in many media outlets, the cold blast in the Eastern U.S. was not due to the ‘polar vortex’ somehow moving south (it can’t really do that),” he wrote. “The current pattern of the atmosphere across the Northern Hemisphere is due to a slowing of the jet stream, which produces more pronounced north-south meanders that become stuck in place for longer periods of time.

“This slowing has been occurring for at least 10-15 years now and comes from a melting/warming Arctic and the weakening of the sub-tropic to North Pole temperature gradient,” he continued. “For the Western U.S., a blocking ridge pattern has largely been in place since early October and has only broken down to let a couple of storms through, and even then, not far enough south to help California.”

Jones said the influence of this pattern on Europe is affecting the wine industry and the world of sports.

“This same jet stream pattern is contributing to a warm Europe where ice wine production is doubtful this year in Germany and a dry winter in Russia where snow is being transported and stockpiled for the Winter Olympics,” Jones wrote.