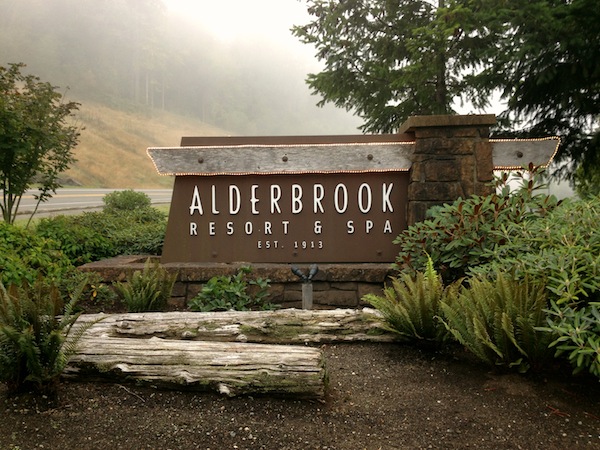 Alderbrook Resort & Spa on Hood Canal in Union, Wash., has been renovated into one of the Pacific Northwest’s quintessential destinations. (Photo by Eric Degerman/Great Northwest Wine)

UNION, Wash. – Offering a dry rosé that guests would embrace seemed to be a moving target for Alderbrook Resort and Spa on Washington’s Hood Canal, but Julia’s Dazzle by Long Shadows Vintners has changed that.

“Rosé traditionally doesn’t sell very well,” said Max Messmer, food and beverage manager. “We’ve never really carried more than one at a time. Then Julia’s Dazzle came out of nowhere. When we first tasted it, my bar manager and I looked at each other and said, ‘Where has this been?!’ It’s absolutely amazing. We couldn’t buy it fast enough.”

A pink Pinot Gris from a Walla Walla icon is just one of the many success stories with Pacific Northwest wine that Messmer can tell since he arrived in 2009 and took over the wine list at this showpiece resort on Olympic Peninsula.

“When I got here, the wine list actually very, very international-heavy,” Messmer said. “There was a little bit of influence from the West Coast, but I’ve moved it to more a Northwest-focused wine list with very few internationals, like Argentine Malbecs and a few from France. It’s at least 75 percent Washington wines, and we have a great selection of wines by the glass and the bottle.”

Messmer transformed the list into one now dominated by famed Northwest producers such as Adelsheim, DeLille, Dusted Valley, Leonetti and Long Shadows.

“People come here for the Northwest experience, and Alderbrook is the quintessential Northwest lodge,” Messmer said. “It’s beautiful. It’s on the water with a great restaurant and great chef. So why not continue that influence with the Northwest wines as we do here?”

Dusted Valley’s Boomtown brand has taken over the red glass-pour program at Alderbrook, while another Walla Walla winery — Canoe Ridge Vineyard — has its white wines featured by the glass. 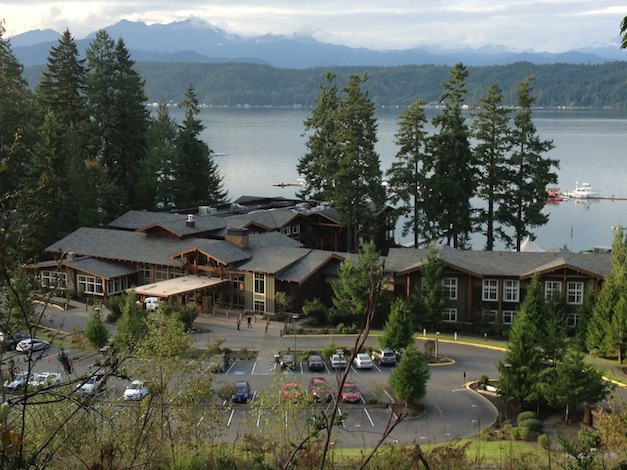 Alderbrook Resort and Spa in Union, Wash., looks out upon Hood Canal with the Olympic Mountains in the distance. The property celebrated its centennial anniversary in 2013. (Photo by Eric Degerman/Great Northwest Wine)

Executive chef Lucas Sautter and Messmer also use their skills and regional ingredients to also showcase Olympic Peninsula wineries such as the established Walter Dacon and upstart Mosquito Fleet.

“We’ve had a long relationship with Ann and Lloyd Anderson at Walter Dacon and carry three of their magnificent Syrahs,” Messmer said.

Alderbrook also sends guests to visit Mosquito Fleet Winery in nearby Belfair to taste the wines by Brian Petersen.

“We sold through his first vintage very, very well, and the Port he makes is very nice, too,” Messmer said. “We have a great relationship with Brian.”

Julia’s Dazzle is a rosé produced by Long Shadows Vintners in Walla Walla, Wash., with sales limited to restaurants and wine shops. The bottling is named for founder Allen Shoup’s granddaughter, and the wine is made with Pinot Gris (98%) and Sangiovese (2%) from The Benches in the Horse Heaven Hills.

The feeling is mutual.

“We have a real appreciation for what Alderbrook is doing for our area with its food and its wine,” Petersen said. “They’ve been a real big promoter and supporter of ours from the beginning.”

Alderbrook also partners with winemakers and nearby breweries on special dinners to help market the resort, the restaurant and the peninsula during the shoulder season.

“The last few winters we have been very successful with those,” Messmer said. “We typically hold six winemaker dinners and two brewmaster dinners.”

This season, one of those winemaker dinners spotlighted Chad Johnson, co-winemaker for Dusted Valley Vintners. Next month, it will be Long Shadows’ turn at Alderbrook.

Unfortunately, the new vintage of Julia’s Dazzle — made by Gilles Nicault and launched specifically for restaurants and wine shops — won’t be quite ready for release.

“That’s an amazing, amazing rosé,” Messmer said. “We sold out of that, and we sold through the stock our distributor had. There is none to buy. We’ve met with our distributor to make sure that doesn’t happen again. It’s fantastic.”

Seafood is traditionally the focus at Alderbrook, a property that does a remarkable job of creating the feel of a mountain lodge within a coastal setting.

“It’s an upscale restaurant, but we get a mix of all types of people and we cater to everybody,” Messmer said. “We have our locals along with our guests who fly in from around the nation and the world, so we accommodate anyone who comes in the door, whether it be the young 21-year-old hipster or maybe you are retired or a full family with children. Our dinner crowd is very diverse.”

Breakfast also can be an interesting mix. Alderbrook features an indoor pool and spa, but it’s also building upon its reputation as a ideal spot for corporate retreats and high-powered business meetings. In the morning you may see guests in bathrobes sitting next to a table of business suits.

His team strives to put them all at ease, starting with his staff’s attire.

“In most fine-dining establishments, they are wearing vests, ties and white dress shirts,” he explained. “Here, we’ve left it a little more casual than what you would expect at a restaurant that has our wine list and our menu because we don’t want the people who are dressing down to feel uncomfortable. Our servers — and myself as a manager — we don’t wear ties, and we don’t wear vests. We try to keep it as casual as possible so that everyone feels comfortable.”

Wearing a tie is something Messmer hasn’t been accustomed to for several years. He came to Alderbrook Resort after spending more than seven years as director of food and beverage for a golf management company in the Puget Sound. Before that, he was GM for the Ram Restaurant and Brewhouse in University Village. 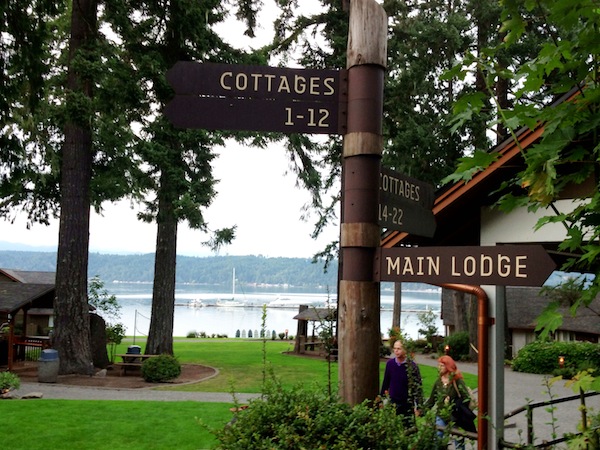 Guests may choose to stay in one of the more than 20 cottages on the property or spend the night in the main lodge at Alderbrook Resort and Spa in Union, Wash. (Photo by Eric Degerman/Great Northwest Wine)

This spring, Messmer will celebrate five years at Alderbrook, which is owned by former Microsoft executive Jeff Raikes and his wife, Tricia. In the past decade, they invested a reported $20 million into the 101-year-old property, which now ranks alongside the Pacific Northwest’s top resorts.

“It’s been an absolute marvelous company to work for,” Messmer said. “The ownership takes care of their staff, both from an entry level to a senior management level, and that’s hard to find these days. With Chef Lucas, my restaurant manager and a great team around me, I feel very comfortable here and have no desire to move anywhere else.”

That explains why Messmer recently purchased a home on nearby Alderbrook Golf Club. His work commute is less than two minutes.

“I get to come to this facility with this view every day and enjoy a little slower pace,” he said. “I don’t miss I-5 or 405 in any way, shape or form. I can’t ever imagine moving back to the city, and that’s the honest truth.”