KENNEWICK, Wash. – Organic wines are thought to be difficult to sell, but one Washington winery is so successful, it has already had to release its 2013 wines – reds and whites – to keep up with demand.

Badger Mountain Vineyard, Washington’s first certified organic vineyard and a producer of wine for nearly 30 years, began shipping its 2013 Pure Red and Pure White wines before the ball dropped in Times Square to mark the beginning of 2014.

Both wines are sold in the 3-liter, bag-in-a-box format, something Badger Mountain Vineyard has used for more than a half-decade. This year, winemaker and co-owner Greg Powers will produce the equivalent of 20,000 cases of Pure Red and 9,000 cases of Pure White.

“We would make more if we could,” said Mickey Dunne, co-owner and sales manager for the Tri-City winery. 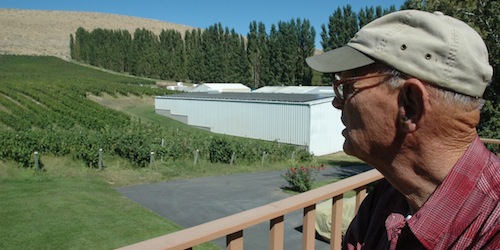 Bill Powers, owner of Badger Mountain Vineyard, looks out at his 73-acre certified-organic vineyard. In the background is his winery production building, which is topped with a solar array. (Photo by Andy Perdue/Great Northwest Wine)

Greg’s father, Bill, began growing wine grapes in 1982. By the mid-1980s, he decided to begin the process of farming organically because he became concerned about what chemicals might be doing to his farming friends and his soil. His vineyard – now 73 acres in size – became Washington’s first certified organic vines in 1990. It makes up about 15 percent of the grapes needed to produce the winery’s organic wines. The rest comes from contracted grapes from throughout the Columbia Valley. Between Badger Mountain and Ste. Michelle Wine Estates – which uses organic grapes for its Snoqualmie label – nearly all of the state’s certified organic vineyards are spoken for.

In total, the winery produces the equivalent of 45,000 cases of certified organic, no-sulfite-added wines under the Badger Mountain Vineyard label, as well as about 25,000 cases of non-organic wines under the Powers Winery label. Some of the fruit for the Powers label comes from famed Champoux Vineyards in Washington’s Horse Heaven Hills. Powers is one of four winery partners in the vineyard, along with Quilceda Creek Vintners, Woodward Canyon Winery and Andrew Will.

The winery’s efforts to be kinder to the land does not stop in the vineyard. Seven years ago, Powers installed a small solar array on its administration building, which supplies about a fourth of the energy needed to run the tasting room and business office. In 2011, it put in a much larger solar array on its production building, which supplies about 17 percent of the energy required to produce wine. Greg Powers said the largest energy usage is to keep the facility cool during the summer.

Powers also collects used cooking oil from a number of restaurants in the Tri-Cities, then converts it to bio-diesel for use in its farm equipment and flatbed trucks needed to haul grapes. The process supplies 1,000 gallons of bio-fuel, enough to fill all of the winery’s needs. 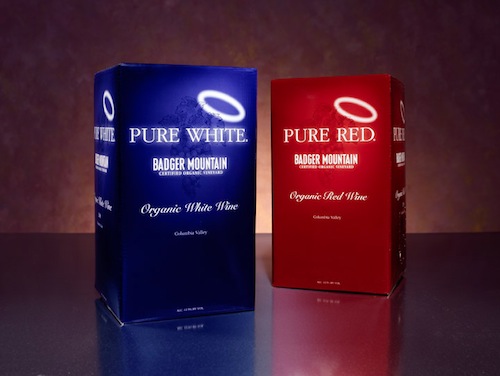 Six years ago, Powers began using the 3-liter bag-in-a-box for both its organic and non-organic labels. The Pure Red and Pure White brands debuted at a Chicago-area Whole Foods and took off. Today, they are available throughout the country, primarily on the West Coast, as well as in Texas, the Northeast and Midwest.

Dunne said a Seattle wholesaler originally requested the 3-liter box format to compete with Black Box, a national wine brand. Today, nobody else is packaging a premium certified organic wine in a bag-in-a-box format, Dunne said – especially with no sulfites added to the wine.

Greg Powers said releasing a 2013 red wine basically eight weeks after the grapes are harvested and crushed is not ideal.

“It would be better if we could wait,” he said. “But you hate to lose shelf space.”

He said releasing the white wine so early is great because the wine drinks so nicely when it’s young. The red wines, he said, can age longer because of their tannins, even with no sulfites being added to the wines. He added that the addition of lower-tannin Merlot and Syrah do help make the Pure Red a much more approachable wine in its youth.

Powers has not yet boxed all of its wines that go into the Pure program. Rather, they are packaged as the need arises to fill inventory. Greg Powers said the bags have at minimum a six-month shelf life, so packaging them as suppliers and retailers need them is ideal for keeping the wine in good shape.

“We wait for back inventory to deplete, then we run more,” Dunne said.

From a cash-flow perspective, moving through so much red wine in such a brief period of time does not hurt business. While most wineries age their red wines anywhere from 18 to 36 months in oak, then bottle and spend another year selling their wines, Badger Mountain basically recoups all of its investment in grapes and packaging within 15 months of harvest.

“The return on capital is quick,” Dunne said. “But there is more of an inventory management element to it that you don’t normally face with wine.”

Additionally, the winery uses 750-milliliter bottles – though they are lighter-weight eco-bottles that save considerable fuel and money on shipping, thus reducing the winery’s carbon footprint. The 2013 Riesling and 2012 Chardonnay retail for $12 per bottle, while the 2012 Merlot and 2012 Cabernet Sauvignon sell for $16 at the winery.

Dunne said the winery is about a year away from beginning to use a 1.5-liter foil pouch. He said this packaging is even more Earth-friendly because everything is recyclable. This also would give Badger Mountain Vineyard three sizes to present to consumers: a 750-ml bottle, a 1.5-liter foil pouch and a 3-liter box. The only delay on starting to use foil pouches is waiting for his bag-in-a-box provider to perfect the packaging.

“This is yet another aspect of how progressive Bill Powers is,” Dunne said. “The bag-in-a-box was a pretty serious departure for a guy who started out farming wheat in Oklahoma. Even now in his 80s, Bill is not afraid to try something new. He is one of those rare people who, if he thinks something can be done better, is willing to take the risk.”