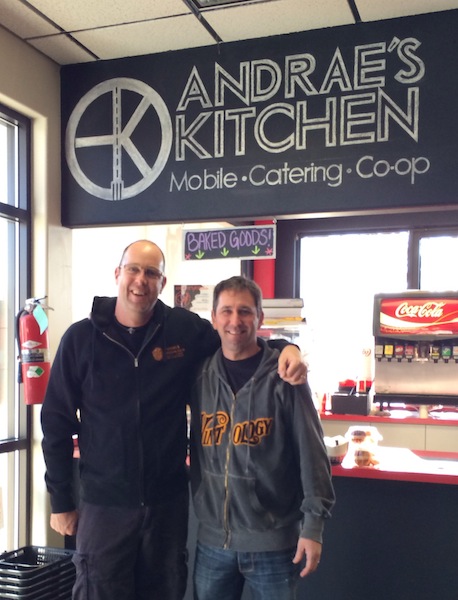 WALLA WALLA, Wash. — Walla Walla winemaker Trey Busch and wine country chef Andrae Bopp scored tickets to the Seattle Seahawks playoff game Sunday, but they didn’t have to pay a dime for them.

Instead, they posted on Facebook their offer to stage a winemaker dinner for eight people — anywhere in the Pacific Northwest — in exchange for two seats to the NFC Championship Game at CenturyLink Field. In less than 48 hours, they found someone willing to trade. On StubHub.com, individual tickets were selling for $470 on Friday night.

“Food and wine is the new currency,” said Busch, co-owner at Sleight of Hand Cellars. “This was all based on the power of entrepreneurship and social networking, and this shows how great the barter system still is.” 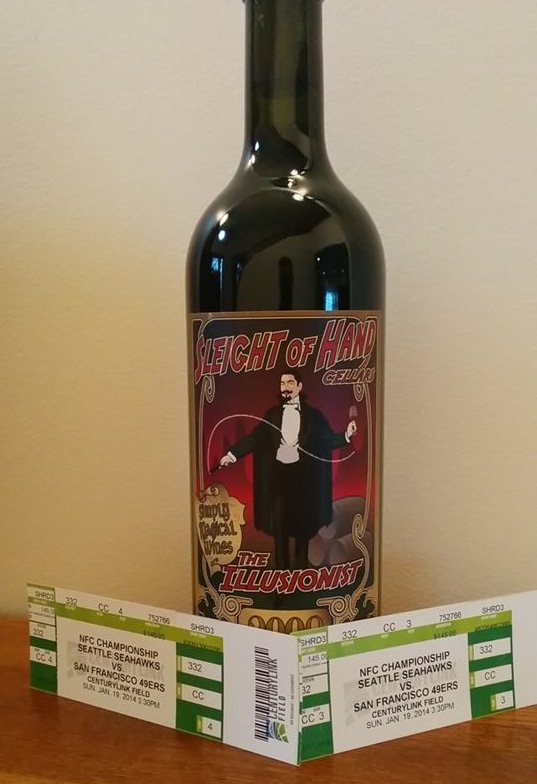 Bopp, who operates the eclectic AK’s Kitchen and caters many wine events in the Walla Walla, said he had little doubt that he and Busch would be there to help cheer on the Seahawks vs. the rival San Francisco 49ers.

“It’s so awesome,” Bopp said. “I think everybody is stunned. All of our buddies are stunned. They said, ‘You’ve got to be kidding me?’ And their next thought was, ‘Why didn’t I think of that?’ It’s going to be pretty epic.”

Last Sunday, after the Seahawks held on to defeat the New Orleans Saints in the division playoffs, Busch and Bopp began to dream of catching the NFC title game in Seattle.

“I tried to buy tickets Monday morning, but it sold out in like 30 seconds, so I just posted something on my Facebook page that if someone was thinking about getting rid of their tickets and would be interested in trading them for Sleight of Hand wine…” Busch said.

Not long after that, Bopp (his name rhymes with hope) sweetened the offer.

“I’m a glass-half-full guy, so I was pretty optimistic something would work out,” Bopp said. “When I saw Trey’s offer of wine, I said on Facebook, ‘Dude, I’m just going to up the ante on this. We had a lot of likes when it was a dinner for four people with wine, but we really started to get the (Facebook) shares and action when we changed it to eight people.”

Both Busch and Bopp are popular figures in the Walla Walla Valley, but the acclaimed wines from Sleight of Hand have gained a large regional following since Busch launched the brand in 2007 with Jerry and Sandy Solomon.

“I had a really good feeling about the tickets because I have 4,000 friends on Facebook and most of them are in the Pacific Northwest and in the wine business and knowing there are all the foodies out there and the social circle of friends and customers being Facebook friends,” Busch said. “I figured there’s got to be someone who knows somebody who has season tickets or a suite and is going to be out of town and going to sell their tickets anyway. We figured it was going to be somebody who was probably looking to sell or give their tickets to somebody because they don’t need the money.”

On Wednesday morning, Busch shared his news on Facebook with his friends.

“GUESS WHO GOT TICKETS TO THE SEAHAWKS/NINERS! THIS GUY!!!! Andrae Bopp and I will be hosting an unbelievable winemakers dinner at the home of our benefactor soon! Man, this Facebook thing DOES work! WOOOHOOO! Now, someone let me know where the best tailgate party will be! We’ll bring some vino over for that as well!”

As it turns out, Busch struck a deal with one of his customers. And it appears as if the winemaker and the chef will make good on their end of the deal this spring.

“It will be a big shindig at his home in the Bellevue area,” Busch said. “It’s a beautiful place, and I’ve been there once before for an event associated with the Auction of Washington Wines.

“It’s a win-win for us,” Busch added. “He’s already a customer of mine, so I don’t feel like I’m giving wine away, and he’ll have six of his friends there, too.”

And it will end up as one of about 40 catered events that Bopp will stage this year.

“Trey and I have done things like this together probably going back to 2003,” Bopp said. “I’ve heard it’s a sweet pad on Lake Sammamish, so it sounds like a win-win situation — especially if the Seahawks can get the big win.” 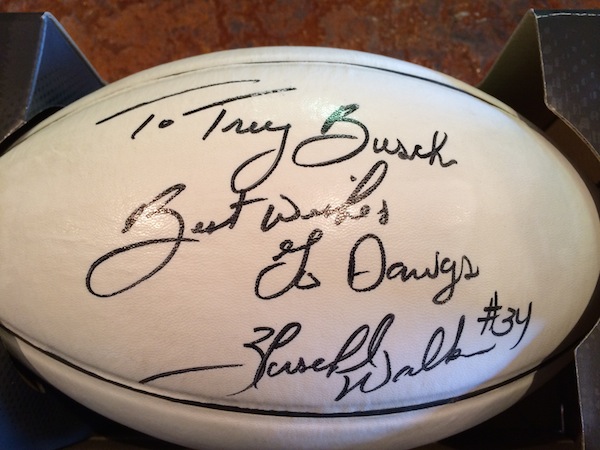 Their seats are in section 332, which puts them on about the 15 yard line on west side of CenturyLink Field. There were some snarky comments of “nose bleed seats,” but neither Bopp nor Busch seems to care.

“They are upper level, but like they say at Pearl Jam concerts, ‘If you are inside the building, that’s all that counts.’ And my friend (Pearl Jam employee) Tim Bierman told me that Seahawks tickets for this game are harder to get than a Pearl Jam concert ticket in Seattle.”

And it was natural for Bopp to join Busch on this barter.

“We go so far back,” Busch said. “I met him when I was at Basel Cellars, and I harassed him for years when he was in Boise to come to Walla Walla. The things he was doing at his restaurant, Andrae’s, in Boise were amazing, and he was doing a lot for Washington wine when he was there. We put the screws to him for a long time, but it wasn’t until Boise was hit hard by the economy that he pulled up roots and moved to Walla Walla.”

In the past five years, they’ve spent a fair bit of time at each other’s homes watching sporting events, and both got the go-ahead from their spouses to attend Sunday’s game.

“The wives are cool with this,” Bopp said. “As much as we love our wives, as my wife says, ‘This is a man weekend.”

This will mark the second straight season for Bopp to watch the Seahawks play. His favorite player is running back Marshawn Lynch, while Busch’s is All-Pro cornerback Richard Sherman.

“I went to the Monday night game last year with Green Bay, the game with the replacement officials that came down the last play of game,” Bopp said. “I never thought I’d top that game, but now we’re going to the NFC Championship Game.”

Facebook will be used to track down tailgate parties

Sunday’s game will kickoff at 3:30 p.m., which gives Bopp and Busch ample opportunity to take in some of the pregame festivities.

“We’ll drive over Sunday morning, and — again through Facebook friends who are going — we’ll know where some of the really good tailgates will be and meet up with a bunch of friends,” Busch said. “And after the game, hopefully we’ll all be in a good mood because we’ll all go home with a big W.”

Win or lose, Bopp knows what he’ll be listening to while riding with Busch.

“I’m sure Trey will have a playlist ready to go, and if there’s anything other than Pearl Jam, I’ll be surprised,” Bopp said. “That’s the only downside to this — eight hours of Pearl Jam there and back.”

Regardless of the outcome, Busch, who named his winery after a song of Pearl Jam’s Binarual album, said he’s mostly looking forward to “The 12th Man” experience of CenturyLink, which has established a reputation as perhaps the biggest home-field advantage in the NFL. Earlier this season, Seahawks fans reclaimed the Guinness Book of World Records for fan noise.

“I’m just excited to see how loud it’s going to be and see if it’s really as loud as people say it is,” Busch said.

Bopp seems confident he won’t be witnessing the Seahawks final game of the season.

“It’s pretty cool the way this all happened,” Bopp said. “It’s a story that when we’re old and decrepit and sitting around drinking beers, we’ll tell about the time we traded wine and food for those tickets — and the Seahawks went on to the Super Bowl.”