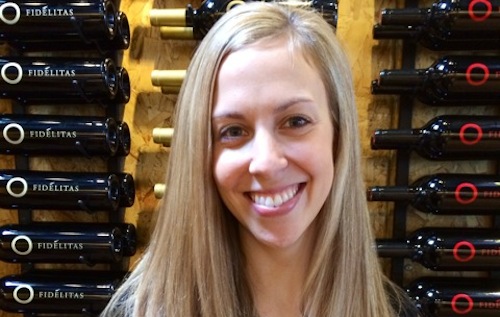 Jess Zander has been promoted to general manager of Fidelitas Wines, which has tasting rooms on Red Mountain and in Woodinville. (Photo courtesy of Fidelitas)

Zander, who has experience working in marketing and events for a Seattle restaurant group, joined Fidelitas in 2008 as its wine club manager. A year later, she took over the winery’s marketing efforts.

“Jess has been an invaluable employee and has played a major role in helping Fidelitas grow,” Hoppes said. “She brings great management skills, creative problem solving and an in-depth wine knowledge to the position, and her exceptional dedication to customer services is a reflection on the winery’s core values.”

As general manager, Zander will oversee the winery’s direct-to-consumer sales, including the two tasting room and the wine club. She also will develop marketing programs, coordinate product development, manage distributor relations and sales and provide financial oversight of the winery.

Zander earned a certificate in wine marketing and sales from the Northwest Wine Academy at South Seattle Community College. The University of Washington graduate also has studied with the International Sommelier Guild.

Charlie Hoppes, owner of Fidelitas Wines, focuses most of his efforts on Red Mountain grapes. He finished harvest this week. (Photo by Andy Perdue/Great Northwest Wine)

Fidelitas is known for its Bordeaux-style wines, particularly its reds. Last year, Hoppes announced that he will focus nearly all of his winemaking energy on Red Mountain grapes, though he will continue to buy grapes from two of the state’s top grape growers: Paul Champoux of Champoux Vineyards in the Horse Heaven Hills and Dick Boushey of Boushey Vineyard in the Yakima Valley.

A few years ago, Hoppes purchased 5 acres of land on Red Mountain, built an avant-guard tasting room and planted 3.5 acres of Cabernet Sauvignon. Boushey manages the Fidelitas estate vineyard. Hoppes has since purchased another 10 acres of land adjacent to his tasting room and vineyard and plans to expand his plantings in 2015, when water for irrigation will be available to him.

Hoppes’ production facility is about 10 minutes away in Richland, where he also produces the wines for such wineries as Hamilton Cellars, Market Vineyards, Gamache Vintners, Anelare and Vinagium.