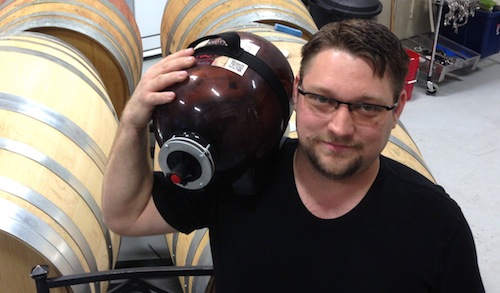 KENNEWICK, Wash. – All he wanted to do was make a beverage his wife would like. Now Daniel Washam has a tiger by the tail – and he isn’t sure where it will lead.

Washam, who owns Sun River Vintners in Kennewick, decided to try making a hard cider last year, just a little something sweet and carbonated that he and his wife might enjoy at home. What he came up with tasted really good, so he took a bottle to work to share with co-workers.

Now he’s making thousands of gallons of D’s Wicked Cider, which is being distributed throughout much of Washington by Budweiser, and he is figuring out what his next move might be.

“I got lucky,” he told Great Northwest Wine. “This is like a Hollywood story. It’s unbelievable.”

Washam grew up in the Tri-Cities. While his family was in agriculture, it wasn’t involved with grapes, apples or other fruits. His father, Glenn, started Sun River Electrical in 1985. After high school, he joined his father in the business. In 2007, he bought Quality Signs, which builds electric signs for regional businesses. Two years later, he was inspired to launch Sun River Vintners by Len Parris, owner of Chandler Reach Vineyards in nearby Benton City.

On a trip to Seattle about a year ago, Washam and his wife, Heidi, enjoyed an apple beer. They liked it so much, they tried to find it again but couldn’t. So he tried to replicate it.

“It was horrible,” he said.

Then he decided to try making hard cider. The self-taught businessman turned to the Internet and read every article he could find and watched YouTube videos on making cider.

“I put it all together, and this is what I came up with,” he said. 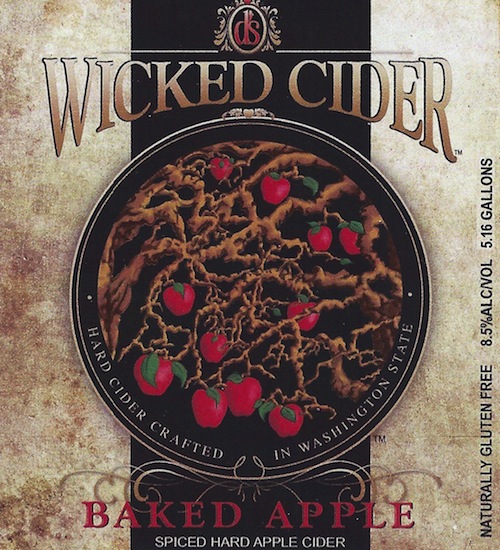 After taking a sample into work, Kat Dykes, the winery’s retail manager, tried it. Even though she wasn’t into cider, she was floored by how good it tasted. So she took it to a local pub called Fox and Bear Public House for the owners to try. They loved it and ordered a keg.

“None of this would have happened if Kat hadn’t taken it over there,” he said. “It was only supposed to be a home hobby.”

But suddenly, Washam was in the cider business. Fortunately, he was able to start producing D’s Wicked Cider under his winery license. However, his winemaker at the time wanted nothing to do with it, so it was up to Washam to make it work.

“I took it upon myself to become the cider guy,” he said. “I just jumped in with both feet.”

Travis Maple has been charged with making the wines starting with the 2014 vintage and maintaining the few hundred cases of production. The former Chateau Ste. Michelle employee served as assistant winemaker at J. Bookwalter in Richland, Wash., for a decade, where he worked alongside renowned consultant Zelma Long. Maple took over for Ali Mayfield, who worked in the Walla Walla Valley at such wineries as Long Shadows, Corliss Estates, DaMa Wines and Foundry Vineyards.

As Washam and Dykes began peddling D’s Wicked Cider around town, more and more businesses began to carry it – and order more.

“Cider is not a big thing yet, but everybody here loves it,” said Katie Lonardo, manager of 3 Eyed Fish, a Richland restaurant and wine bar. “It’s really yummy, really fresh. A lot of regulars like to order it. We even had someone from Seattle come over just to try it.”

D’s Wicked Cider also rotates onto one of the three taps at Bookwalter Winery‘s bistro in Richland, where owner John Bookwalter said it sells well. Eventually, Washam got it placed in a couple of restaurants in Spokane, two hours to the north. That’s when it began to gain attention.

In December, he managed to get a meeting with the chief operating officer of King Beverage, an Anheuser-Busch distributor that handles Budweiser products in eastern and southwestern Washington. The process of getting a new beverage into this distribution chain can take months, but Washam’s hard cider so impressed the King Beverage team, he was filling his first order in less than a week.

That was a month ago. Already, King Beverage has taken about 60 kegs of D’s Wicked Cider.

Washam’s cider, which he calls Baked Apple, uses a proprietary blend of apple varieties grown in the Yakima Valley. He came up with a special blend of spices to give it a flavor reminiscent of apple pie. 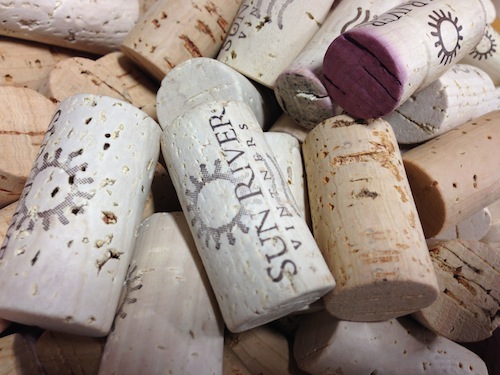 Now he is developing another cider, which he’s calling Hobbit Foot. It’s a blend of green apples, and it’s tart and distinctive.

Up until Christmas, Washam was making his ciders in small batches. He carbonated them by hooking a keg to a C02 canister and shaking the keg for an hour. Obviously, that wasn’t sustainable, so he purchased a “bright tank,” which allows him to carbonate hundreds of gallons of cider in less than a day. He uses white wine fermentation tanks to make the cider and can produce 1,200 gallons every 21 days or less.

As his success grows, he is looking to add more equipment and more outlets. In addition to packaging his ciders in kegs, he also sells them in refillable party pigs. Right after the Super Bowl, he will begin putting Baked Apple Cider in 22-ounce bottles that will retail for around $6 or $7. A mobile bottler that services Ice Harbor Brewing Co. in Kennewick will handle his business, too.

King Beverage plans to introduce Washam to other Anheuser-Busch distributors regionally and nationally, and he is starting to dream about what D’s Wicked Cider could become.

“My goal is to go from here to Florida,” he said with excitement.

Considering how quickly he has come this far, don’t bet against him.