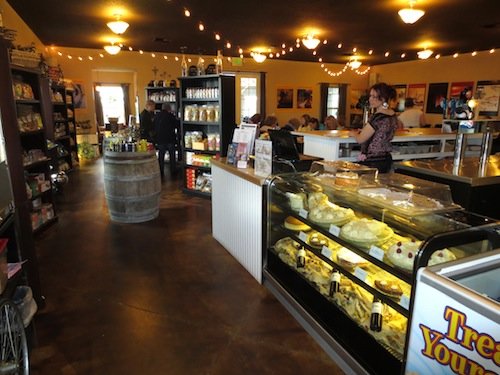 Westport Winery on the Washington coast has expanded its tasting room to accommodate its increased number of customers. It also is selling fresh produce and has created a fresh juice bar. (Photo courtesy of Westport Winery)

ABERDEEN, Wash. – A coastal winery that has found stunning popularity despite its remoteness from traditional wine country is doubling the size of its tasting room and adding a fruit and vegetable stand.

Westport Winery, which is about halfway between the city of Aberdeen and the Washington coastline, announced this weekend that it is doubling the size of its gift shop and tasting bar to accommodate ever-growing crowds of fans. The winery, owned by the Roberts family, makes nearly 7,000 cases of 33 different wines and recently added three ciders to its lineup of offerings.

“We’ve been struggling to accommodate all those who want to try our wines, as we’ve grown so much in the past six years,” said co-owner Kim Roberts. “Because we can’t add on to the building, we’ve reallocated space inside in an effort to better serve everyone.”

Westport Winery, which launched in 2008, has added a number of amenities to its winery throughout the past half-decade, including a restaurant, bakery, nursery, sculpture garden, themed gardens, dog park and vineyard maze. It is in the process of developing an arboretum on 40 acres across Highway 105 from its main property.

With the changes, the winery has added to its retail offerings by providing access to food.

“We’re adding a lot of non-GMO foods, vegan and gluten-free options, and more local produce,” Roberts said. “Since we grow so many fruits and vegetables, we’re also adding a new section of fresh produce.”

Westport Winery also is adding several to-go items, such as soups, sandwiches and salad dressings, as well as a fresh-juice bar.

“All of these changes in the winery give us the chance to further enhance the nature of who we are and what we do,” Roberts said. “We make fresh food with local products and offer them on a daily basis. It’s a new kind of convenience store. We’re local, healthy and focused on quality.”