Chardonnay has been at or near the top of the heap in Washington wine country for the better part of 30 years. But how did it get to that position? 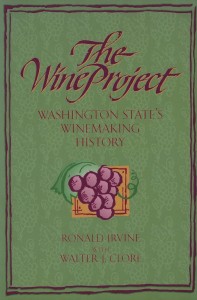 According to The Wine Project, Ron Irvine’s superb history of the Washington wine industry, the grape arrived in either 1963 or 1964. Washington State University’s Irrigated Agriculture Research and Extension Center (IAREC) in the Yakima Valley town of Prosser indicates the grape arrived from the University of California-Davis in 1964. But elsewhere in Irvine’s book, it is noted that the stakeholders for Associated Vintners planted Chardonnay – along with several other varieties – in 1963 on Harrison Hill near Sunnyside.

Regardless of which year Chardonnay showed up in Washington, by 1968 only 9 acres were planted in the state, according to records provided by Wade Wolfe of Thurston Wolfe Winery from when he worked at Chateau Ste. Michelle in the 1970s.

In 1968, Al Newhouse planted Chardonnay on his property at the base of Snipes Mountain near Sunnyside. Newhouse, who would later purchase the Harrison Hill vineyard from William B. Bridgman’s family, planted those grapes for Seneca Foods Corp., which was preparing to launch a Washington winery called Boordy Vineyards in Prosser. But by the time the vines began to bear fruit, Seneca no longer wanted the grapes, so Newhouse sold them to a winery in Canada for four or five years, said his grandson, Todd Newhouse.

After that, Associated Vintners, which later became Columbia Winery, contracted the grapes until Chateau Ste. Michelle picked up the contract in the late 1970s. Ste. Michelle purchased the grapes until 2003. The vineyard became badly injured in the epic 1996 freeze that damaged nearly half the vines in Washington’s Columbia Valley. Todd Newhouse eventually pulled out the vines and replanted with Concords.

“We knew it was an undesirable spot,” Todd Newhouse told Great Northwest Wine. “When the state had way too much Chardonnay in 2001 and 2002, that was when one of the contracts came up and didn’t get renewed. We knew it was time for them to go.”

But that 1968 block lives on. In 1979, Al Newhouse wanted to plant more Chardonnay but couldn’t get any plant material.

“It was a last-minute decision,” Todd Newhouse said. “Nobody had any plants.”

So he pruned his 1968 vines and, without using rooting hormone or anything else, simply stuck the sticks in the soil on steep, rocky slopes. Everyone in the industry, including experts at WSU in Prosser, told Newhouse he was crazy and it wouldn’t work. Yet, 95 percent of those vines lived, and that section of his vineyard, now dubbed the “Water Tower Block,” is the best Chardonnay block at Upland Vineyard on Snipes Mountain.

“Nobody thought anything would grow in those rocks,” Todd Newhouse said.

By 1972, Washington had 127 acres of Chardonnay planted. That fell to 112 acres in 1974 but went back up to 194 by 1978. That same year, Chateau Ste. Michelle began planting wine grapes around the Horse Heaven Hills community of Paterson at the future site of Columbia Crest. The company established vineyards at the rate of 500 acres per year, and Wolfe, who oversaw viticultural operations for the company at the time, said at least a few circles were planted to Chardonnay.

Thanks to this, Washington Chardonnay plantings grew to 962 acres by 1982.

By 1985, the U.S. Department of Agriculture began to track Washington wine grape harvest information, including tons crushed and prices per ton. That vintage, a spring frost damaged many vineyards, particularly white wine grapes. Despite that, Washington crushed 2,050 tons of Chardonnay that year, making it the state’s No. 2 grape behind Riesling’s 6,400 tons.

With vineyards recovered from the 1985 frost damage, Washington Chardonnay tonnage nearly doubled in 1986. Then it doubled again in 1987 to 7,500 tons. It and all other varieties dipped in 1991 because of severe winter damage, then Chardonnay cruised above 10,000 tons in 1992 for the first time.

By 1993, Riesling sales had stagnated because of increased national interest in Chardonnay. This meant virtually no new plantings of Riesling, while growers and winemakers kept increasing their stakes in Washington Chardonnay. That year, Washington wineries crushed 15,000 tons of Chardonnay to make it the state’s No. 1 variety – a crown it would wear until 2008. Since 2009, Chardonnay and Riesling have traded back and forth as the state’s No. 1 wine grape.

Today, Chardonnay is planted in nearly every American Viticultural Area in Washington, and nobody understands the state of Washington Chardonnay better than Bob Bertheau, head winemaker at Chateau Ste. Michelle. Bertheau and his team in Woodinville make five styles of Chardonnay, with their Columbia Valley bottling numbering 700,000 cases in annual production.

Bertheau said some of his oldest Chardonnay vines are at Cold Creek, Ste. Michelle’s estate vineyard north of the Yakima Valley. Those vines date back to when Cold Creek was replanted after the devastating 1978-’79 winter freeze. Bertheau describes the grapes from the warm Cold Creek site as being decadent, not unlike the fruit he receives from the Wahluke Slope just to the north.

Bertheau said grapes he buys from the Yakima Valley also date to the 1970s, and that region – Washington’s oldest AVA – holds the vast amount of the Washington Chardonnay plantings. Just southeast of the Yakima Valley AVA near Richland and across Interstate 82 from Red Mountain is Goose Ridge Vineyard. Bertheau describes 1,600-acre Goose Ridge as one of his favorite Chardonnay vineyards because of its temperate climate and annual consistency. He describes it as not nearly as warm as Red Mountain but not as cool as the Ancient Lakes of Columbia Valley.

Ancient Lakes, which is in and around the Columbia Basin towns of George and Quincy, is an interesting location for cool-climate Chardonnay. However, with the still-strong interest in Riesling from that AVA, Ste. Michelle is not asking growers to put in much Chardonnay, Bertheau said. To the south of Ancient Lakes in the Frenchman Hills, Bertheau also is excited about a new block of Chardonnay coming from Lawrence Vineyard.

What is future of Washington Chardonnay?

What is the future of Washington Chardonnay? Most certainly, it will remain strong for years to come because of its popularity nationwide – it is the No. 1 wine grape variety in California with more than 735,000 tons crushed in 2012.

But in 2012, while Chardonnay remained the state’s No. 1 grape, Riesling, Cabernet Sauvignon and Merlot all were just behind it. And with Washington tipping toward being a red-dominated wine-growing region, more red grapes are going into the ground in such regions as the Horse Heaven Hills, Wahluke Slope, Red Mountain and Walla Walla Valley.

Indeed, of the 11,731 acres of wine grapes planted in the Horse Heaven Hills, Cabernet Sauvignon is No. 1 with nearly 4,300 acres, followed by Merlot with 2,275 and Chardonnay a distant third with 1,600 acres – much of that at Ste. Michelle’s Canoe Ridge Estate and Horse Heaven vineyards.

“It’s at a flat spot,” Bertheau said. “There are not a lot of new vines going into the ground.”

The 2013 harvest numbers are not yet available from the USDA, but they could well reveal that Cabernet Sauvignon has become the state’s No. 1 wine grape, thanks to the recovery of Horse Heaven Hills vineyards from the 2010 freeze.

Meanwhile, Washington wineries will continue to make Chardonnay because it is quick to turn around and sell, making it an important wine for many producers’ bottom lines.