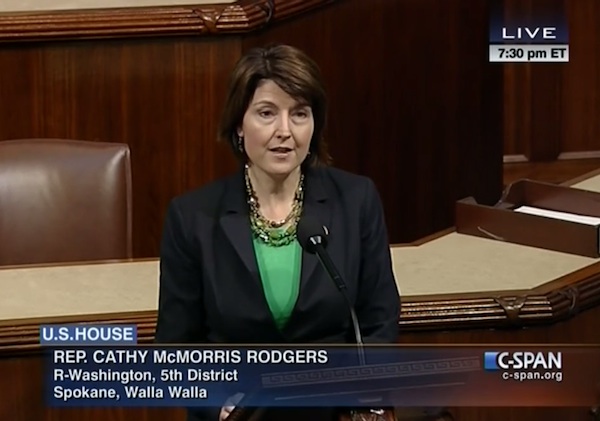 Congresswoman Cathy McMorris Rodgers represents Washington state’s 5th District in Washington, D.C. She took to the floor of the House of Representatives on Monday, Feb. 10, 2014, to recognize the 30th anniversary of the federal government establishing the Walla Walla Valley as an American Viticultural Area. (Photo courtesy of C-Span)

Congresswoman Cathy McMorris Rodgers, who represents Washington state’s 5th District, spoke on the floor of the House of Representatives earlier this week to recognize the 30th anniversary of the federal designation of the Walla Walla Valley as an American Viticultural Area.

“Over the past 30 years, the Walla Walla Valley has earned national and international recognition for being one of the best wine regions in the world, just ask Gary and Nancy Figgins who opened Leonetti Cellar in 1984 when there were just four wineries in the valley,” McMorris Rodgers, chair of the House Republican Conference, said Monday night in a 73-second speech. “Today, within 1,800 acres of green rolling hills, you will find 130 different wineries. This growth has allowed businesses to expand and wine tourism to become one of the top industries in our state.

“Our community has rallied around the business owners, and now wine-related jobs account for nearly 15 percent of the total jobs in the area,” she continued. “All of this leads to a $500 million-dollar economic impact. But it’s not the just numbers. It’s about a community that makes us all proud in Washington state to call it our home. I am honored to represent the Walla Walla Valley, and congratulations on 30 exceptional years. Best wishes for many, many more to come.”

Some of McMorris Rodgers’ ancestors settled in the Walla Walla Valley in 1853, according to her biography. Earlier this year, she moved her Walla Walla office next to Mark Ryan Winery on Main Street.

“We’re thrilled that Rep. McMorris Rodgers, along with Senators Cantwell and Murray, officially recognized the historic and economic impacts that our wine industry has had on the Walla Walla Valley and the State of Washington,” Duane Wollmuth, executive director of the Walla Walla Valley Wine Alliance, said in a news release. “The first 30 years were so fantastic – and we can’t wait to see what the future has in store.”

On Thursday, March 20, a number of longtime winemakers will meet at the Gesa Power House Theatre in Walla Walla for the Walla Walla Valley Wine 30th Anniversary Celebration.

The three-hour event begins at 6:30 p.m. with a roundtable discussion featuring Gary Figgins, Rick Small of Woodward Canyon, Marty Clubb of L’Ecole No 41, Eric Rindal and John Freeman of Waterbrook, Casey McClellan of Seven Hills Winery (1988) and Norm McKibben of Pepper Bridge Winery and Seven Hills Vineyard (planted in 1981). Andy Perdue of GreatNorthwestWine.com, who is also the wine writer for The Seattle Times, will moderate the panel.

After the 90-minute roundtable, attendees will be able to meet the winemakers and taste their wines as well as those produced by Basel Cellars, Canoe Ridge Vineyard, Northstar, Skylite Cellars, Spring Valley Vineyard and Three Rivers Winery.

Appetizers will be provided. Tickets ($50) are on sale.