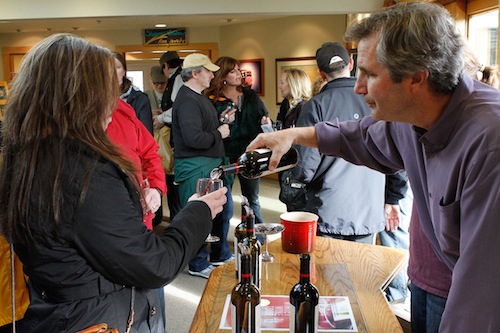 CANNON BEACH, Ore. – One of the most enjoyable late-winter wine events is coming up the first full week in March.

Some 40 wineries have signed up for the Wine Walk, a moving festival in the coastal community’s downtown shopping district.

The festival kicks off March 6 with the “Thursday Night Throwdown.” During this event, three red wine varieties and three white wine varieties are selected for a tasting, with participants choosing the winners. The Throwdown takes place from 5 to 7 p.m. at the Cannon Beach Community Hall.

On Friday, the first seminar is called “What Varietal is it?” and is led by Hank and Nancy Sauer, two longtime Northwest wine enthusiasts. During this blind tasting, participants will learn how to tell the difference between Cabernet Sauvignon and Syrah, for example. It runs from 1 to 2:30 p.m.

At 4:30 p.m., the “Battle of the Blends” takes place, in which four red blends and four white blends are tasted, with participants choosing their favorites.

On Saturday, a seminar called “Do You Know Your Cinsault?” will be led by Seattle Times wine columnist Andy Perdue, who will take the participants through a blind tasting of several lesser-known varieties. It runs from 10:30 a.m. to noon.

The festival concludes Sunday with sparkling wine and brunch.

Tickets are $30 per event, while a festival pass for $119 gets you into everything.

The Savor Northwest Wine Competition results also will be revealed after the festival. It is conducted as part of the event.