“I did it because we were already headed in that direction with our work with bees and background beneficial insects, but people are looking for wine that is sustainably produced,” Bitner told Great Northwest Wine. “It’s a great marketing thing for Idaho.”

Neighboring winemaker Greg Koenig, whose clients include Bitner Vineyards, can use news of the LIVE certification as a talking point in Asia, where he continues to expand his market for Koenig Vineyards wines.

“Greg told me those people are demanding that we do something along these lines, so this is important,” Bitner said.

It was the Idaho Wine Commission — not Bitner — who announced the news, and it came on the eve of the state’s annual wine industry conference in Boise.

“Having a LIVE certified vineyard in Idaho is yet another way we can show the world that the Idaho wine industry has arrived and has begun to be seen as an impressive winegrowing region to watch,” executive director Moya Dolsby said in a news release. “We are very proud of the Bitners’ achievements and hope to see more Idaho vineyards become certified in the future.”

Bitner pointed out the requirements for LIVE certification on his estate, which includes 16 acres of grapevines, are less stringent that those to be certified organic.

“So this is doable,” he said. “With the pressure that we face from mealybugs, we still need to be able to use pesticides. It’s something that I’ve never had to do, especially now because so many of the pesticides have gotten so expensive to buy.”

LIVE is a nonprofit organization with a mission to independently certify environmentally and socially responsible winegrowing in the Pacific Northwest. The movement was began in 1997 within the Oregon wine industry, but it recently started to promote and certify sustainable practices in the Washington, Idaho and British Columbia. Third-party inspectors are used to verify internationally accredited standards, and LIVE is widely viewed as the leading certification for the Northwest wine industry. It also monitors treatment of vineyard workers and checks to ensure that waterways are protected.

Bitner’s pursuit of LIVE certification began in 2010 when Chris Serra, executive director of LIVE, met with the Idaho Wine Commission. Years devoted to research of mason bees and leafcutter bees made Bitner sensitive to the plight of all bees — including the irreplaceable crop-pollinating honeybees — so he and his wife, Mary, landscape with native plants to attract various bee species.

“It’s a two-year program, and I was set back a year because it turns out my lawn is included in the property, and I was still having herbicide applied, so I had to get away from using that,” Bitner said. “I now use an organic fertilizer on the lawn, and the landscaping crew goes in and weeds the yard by hand.”

Homeowners in the Snake River Valley with large lawns aren’t the only folks breathing a bit easier this week. Bitner and the rest of Snake River Valley agriculture community welcomed a recent series of storms that brought much-needed rain and snow to the region. Last month, maps of the country developed by the U.S. Drought Monitor Service indicated the Snake River Valley has been the driest region in the Northwest. It graded out as suffering from “extreme drought” — that same rating used for Northern California’s wine country.

“The snowpack has been very light, but in the last 10 days we’ve had a lot of moisture and a lot of building of the snowpack,” Bitner said. “We’ve been quite thankful for that, but in the vineyards, we’re typically through irrigating by the middle of July. It is the farmers around us who are into potatoes and grains who go beyond that. And the alfalfa hay farmers are really concerned. They also are heavy users, but they have to irrigate clear through August.”

What concerns Bitner the most is northward march of red blotch.

“The California guys are nervous about this virus,” Bitner said. “It’s moving into Oregon and Washington, and there are not a lot of answers for it. It’s closely related to leaf roll, but we don’t even know what the vector is yet. In California, some growers say they are noticing a 5-6 percent reduction in sugar. We can’t afford that in Idaho. It takes us to the end of October or the first of November to make 25 or 26 brix some years.

“I turn 68 this year, and I can see the light at the end of my tunnel,” Bitner added. “I want to help the industry continue to grow, and this is scary.”

There’s been some crop diversification at Bitner Vineyards in the past few years as they are hoping to establish a truffle industry in the Snake River Valley. He’s partnered with Paul Beckman, a friend in nearby Eagle, on a 45-acre project to plant hazelnut trees and oak trees that have been inoculated with truffle spores by New World Truffieres in Eugene, Ore. The truffle varieties being experimented with are French black, Italian spring and Burgundian.

“We’ve been told it takes eight to nine years before they start producing truffles, and my trees are only six years old, so we’re just sitting back and waiting,” Bitner said. “Paul planted some of his a couple years before I did, and they are starting to produce.”

Indeed, two years ago this month, Beckman recorded his first Italian spring white truffle at a soil depth of 8 inches, thanks to the nose of Sophia — an Italian truffle dog.

Last week, a dozen more were reported, so Bitner is hopeful French black truffles will be unearthed in his plantings near Plum Road in the next couple of years.

“We had a French black truffle shipped out — it was golf ball-sized and cost $75,” Bitner said. “And we’ve had the dogs out here. They didn’t find anything yet, but it was fun to get people out here to see that.”

Chardonnay, Riesling falling out of favor in Idaho

If the truffle experiment succeeds at Bitner Vineyards, he might give more consideration to sacrificing some vineyard for trees. He began in earnest with two white varieties — Chardonnay and Riesling, which made them some of the state’s oldest vines — with the rest planted to Cabernet Sauvignon, Merlot, Petit Verdot and Syrah. He’s already sacrificed some Riesling because the price made it unprofitable, so he’s developed a blend under his Coyotes High Desert brand.

“I make take out some of the Chardonnay vines because I can’t find a market for it,” Bitner said. “My vines are 34 years old this year, so I’m looking to come back with new varieties. There’s nothing wrong with the site, but we’ve never had anybody paying us enough for the grapes in order to put anything back into the vineyard. That needs to change.”

Meanwhile, Bitner Vineyards continues to build traction with the estate red wines made by Koenig. Production has slowly increased to a record 1,200 cases, with 90 percent of sales coming directly out of the tasting room. His wife, Mary, manages the tasting room along with their estate B&B that’s set above their vineyard and looks out upon the Snake River Valley with the Owyhees on the horizon.

“Last year, we had 5,000 people through our tasting room,” Bitner said. “That may not be a lot for some people, but it’s good for us, and it keeps getting better each year.” 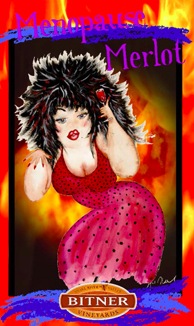 Mary’s ingenious bit of marketing has a growing demand for her Menopause Merlot.

“We’re doing a 100 cases of it this year because it’s gone in just two or three months,” Ron chuckled.

This year, Bitner Vineyards will release its first Tempranillo, and the Bitners continue to book musical performances and special events for the deck that hangs out over a portion of their vineyard, but there are plans for an extensive remodel and expansion of that patio. He’s got his reasons, which include a bit of pride.

“We have a couple of winemaker dinners in Palm Springs lined up again this year because people down there are really enjoying these Idaho wines,” Bitner said. “We can grow the right grape varieties and make nice wine, but we need to kick it up another level in Idaho in order to bring some out-of-state people for tourism and hopefully to invest.

“And I’ve got a couple of friends of mine who have done well in the California wine industry that are always asking how things are up in Idaho and want to visit one of these years,” he added. “I want the place to look nice for when they actually do show up.”