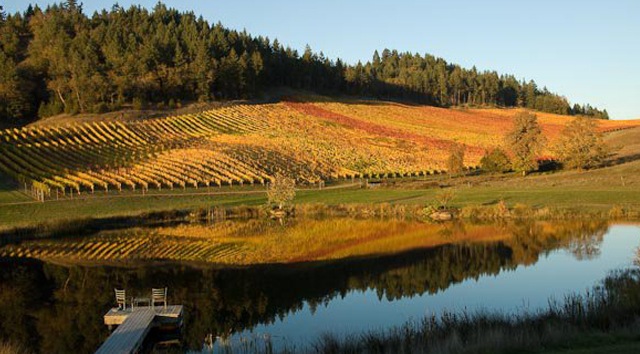 ROSEBURG, Ore. — The Umpqua Valley Winegrowers Association used the 30th anniversary of the federal government’s establishment of the Umpqua Valley American Viticultural Area as inspiration to create a new logo and redesign its website.

“Our new branding and website celebrate our rich array of wine varieties and family growers and wineries,” Terry Brandborg, President of the Umpqua Valley Winegrowers Association said in a news release. “Here in the Umpqua, we invite you to delight and discover in all that we have to offer, including a diverse selection of over 40 wine varieties, warm, personalized tasting experiences at our 22 member wineries, and abundant natural beauty. Our region offers a quick escape into tranquility for Portlanders and those traveling on I-5.”

Established in 1984, the Umpqua Valley AVA is one of the oldest in the Pacific Northwest, but its history of commercial wine production goes back to the late 1800s when the Doerner and Von Pessl families planted vitis vinifera in the Roseburg area.

While the Von Pessls transitioned out of the Oregon wine industry, the Doerners continued to sell wine into the 1960s, and Adolph Doerner helped Richard Sommer plant the first vines at HillCrest Vineyard, the Roseburg winery widely credited with producing Oregon’s first bottle of Pinot Noir in 1967.

Unfortunately, the 30th anniversary of the AVA began with sadness when longtime Elkton grower John Bradley, who also operated Bradley Vineyards, died unexpectedly Jan. 22. Bradley first planted his vineyard in 1983 and provided historical assistance that contributed to last year’s establishment of the Elkton AVA, a sub-appellation of the Umpqua Valley.

“It was a true shock to us and all in Elkton,” Brandborg, owner and winemaker for Brandborg Vineyard & Winery, told Great Northwest Wine. “In no small measure John was the glue for all of us.”

Bradley’s 2009 Riesling won top honors at the wine competition portion for the 2012 Greatest of the Grape, the Umpqua Valley’s signature event and one of the oldest public tastings in the Pacific Northwest.

The 44th Greatest of the Grape will be held March 1 at Seven Feathers Casino Resort in Canyonville. The gala features food-and-wine pairings from Umpqua Valley chefs and showcases live music.

To celebrate these milestones, the Umpqua Valley wine group is awarding two complimentary Greatest of the Grape event tickets to its Facebook fans. To be entered into the Feb. 25 online drawing, fans need only to “like” the organization’s Facebook page.

Tickets start at $75 and are available online at www.umpquavalleywineries.org.