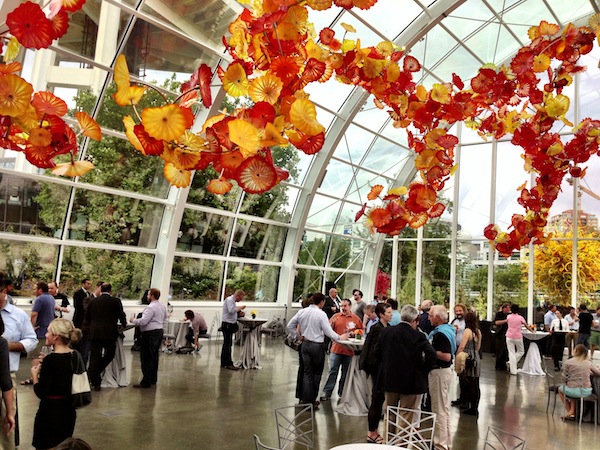 The Glasshouse at Chihuly Garden and Glass in Seattle played host to the farewell reception for Chateau Ste. Michelle’s Riesling Rendezvous in 2013. (Photo by Eric Degerman/Great Northwest Wine)

SEATTLE — Taste Washington festivities begin earlier in the week this year with the Red and White Party, a new high-end consumer event in the Glasshouse at Chihuly Garden and Glass featuring magnums poured by more than 20 of the state’s top producers.

The inaugural Taste Washington Magnum Party is Thursday, March 27, at Seattle Center. Catering will be headed up by Collections Café chef Ivan Szilak, and the food and wine will be accompanied by live music.

A ticket costs $195, which includes a gratuity of $27.12, and is available online at the Chihuly Garden and Glass website.

“I am excited about the new Red & White Party!” Côte Bonneville winemaker Kerry Shiels told Great Northwest Wine. “The Chihuly Glasshouse is a beautiful setting for these special, hard-to-find wines. It promises to be a more intimate setting for the best of Taste Washington. My mom (Kathy) will be pouring for Côte Bonneville, and we will be featuring our Chardonnay and the 2004 Côte Bonneville Estate from our library.”

The wines were selected by Chihuly Garden and Glass, according to Kauilani Robinson, public relations manager of Visit Seattle, which is orchestrating the Red & White Party.

Chris Sparkman, chair of the Washington State Wine Commission and winemaker for Sparkman Cellars, is credited with creating the concept.

“He was the brains behind this event,” Robinson said. “He had the idea to do a magnum event that would help grow Taste WA, and this is the first event outside of the weekend to do that.” 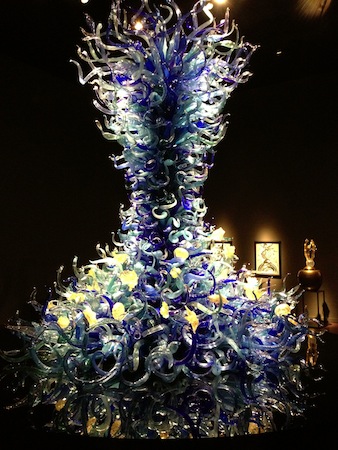 ‘A Tower’ is the featured display within the Sealife Room of the Chihuly Garden and Glasshouse exhibit at Seattle Center. (Photo by Eric Degerman/Great Northwest Wine)

As of Friday, 205 wineries and 71 restaurants were scheduled to participate in the two-day event — billed as the largest of its kind in the country — at CenturyLink Field Center.

Chihuly’s glass work and friendship with then-Ste. Michelle CEO Allen Shoup led to the development of Chateau Ste. Michelle’s Artist Series, which was launched with the 1993 vintage using images of Chihuly art on the labels of the red Meritage-style blend.

The concept of teams blowing glass was introduced to him during a fellowship in Venice, Italy, and in 1971, Chihuly returned to his home state to help launch the Pilchuk Glass School in Stanwood. His acclaimed work inspired the creation of the Museum of Glass in Tacoma, which opened in 2002.

The Chihuly Garden and Glass in Seattle, a LEED Silver-certified project, opened May 21, 2012. Last summer, it played host to the farewell reception of Chateau Ste. Michelle’s Riesling Rendezvous.