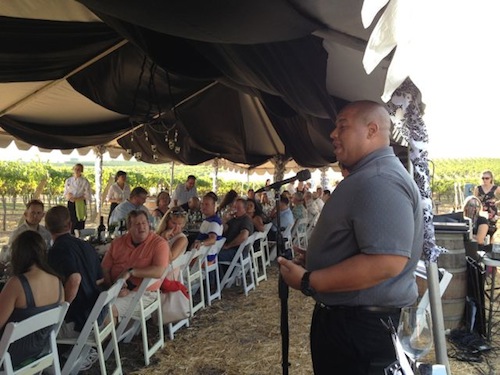 Jordan Chaney, a spoken-word poet who lives in the heart of Washington wine country, will perform during “A Moveable Feast,” a dinner at Kestrel Vintners in the Yakima Valley. (Photo by Andy Perdue/Great Northwest Wine)

PROSSER, Wash. – A Yakima Valley winery is combining the inspiration of the spoken word with the bottled poetry of its winemakers.

Kestrel Vintners is putting on its inaugural “A Moveable Feast,” a dinner featuring the works of Ernest Hemingway, Khalil Gibran, Rumi and William Shakespeare – all performed by wine country poet Jordan Chaney.

Chaney, a spoken-word poet who lives in the heart of Washington wine country, also will perform “Ode to Grape,” a poem he wrote and has performed throughout the Columbia Valley.

“A Moveable Feast” is named for a memoir written by Hemingway about his time spent as an American expat while living in Paris in the 1920s. It was published in 1964, after Hemingway died in Ketchum, Idaho.

The dinner opens with a reading from Hemingway with the appetizer course of herb-baked oysters. The salad course features a reading from “The Prophet” by Khalil Gibran. Chaney will perform “Ode to Grape” during the intermezzo, a Syrah granita. The main course will be accompanied by Shakespeare’s famous “Sonnet 18.” And Rumi’s “Ode 314” will be performed during dessert.

The cost for the five-course dinner is $85 ($65 for wine club members). It includes all wines that go with the event. 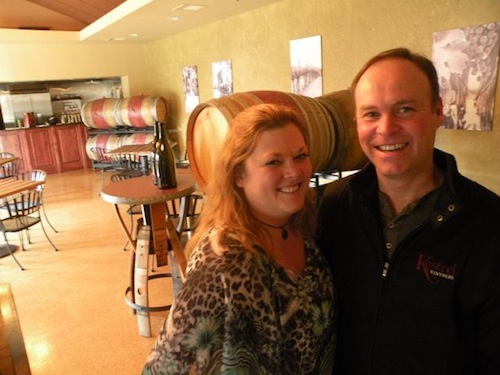 Chef Jessica Smith and winemaker Flint Nelson will collaborate on “A Moveable Feast” at Kestrel Vintners on March 15.

Darwen said two of Chaney’s books, “Rocket Fuel for Dreamers” and “Double Barreled Bible,” will be available for sale during the event.

Kestrel has gained regional fame in the past couple of years for an over-the-top wine, food and performance event called The Big Night. Darwen said The Big Night, she said, was an inspiration for A Moveable Feast.

“Everything is based on artists and chefs,” she said. “Artists tend to be in a place where the cost of living is lower, and we have a wealth of artists here in Washington wine country.”

“I told her, ‘Here’s a poem, make a dish,” Darwen said with a chuckle.

Chaney told Great Northwest Wine he is thrilled to perform his poetry as well as others’.

“I love the whole concept,” he said. “I once thought wine was high society and snobbery. Now I understand that almost everything in wine is a metaphor. It really is poetry in a bottle.”

Chaney, who has been dubbed “the poet laureate of the Northwest wine industry,” has performed at wineries for years, including Bookwalter in Richland and Col Solare on Red Mountain. He also wrote poetry that appeared quarterly in Wine Press Northwest magazine for about three years.

“I love finding new ideas and metaphors and pressing out of my grape,” he said, holding his hands on each side of his head and pushing.

“Wine and poetry go hand in hand,” he said. “They even called Rumi “the drunken sufi” because of his love for wine and women. There’s new poetry every vintage.”