By any measure, Cabernet Sauvignon is the king of Washington wine: in tonnage, value, acreage and the hearts of wine consumers.

The annual Washington wine grape harvest report, which was released Monday afternoon by the U.S. Department of Agriculture, indicates that for the first time in state history, a red wine grape is No. 1. In 2013, Cabernet Sauvignon production jumped 18.6 percent to 42,600 tons harvested last fall.

Corliss said nearly all the growth in Washington red wine grapes have come from new plantings in the Horse Heaven Hills and Wahluke Slope.

“Those are the warmer areas,” he told Great Northwest Wine. “Our expansion is virtually all red grapes.”

“They’re exactly what we see on the sales side,” Bertheau said. “Reds are taking off. The current growth trend is toward reds.” 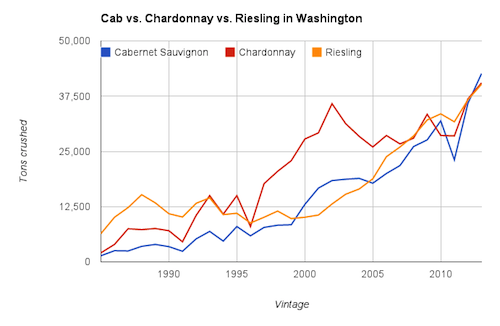 This chart shows the growth of Washington’s three largest wine grape varieties since 1985. Last fall, Cabernet Sauvignon took over the No. 1 position in Washington wine country.

Rob Griffin, owner of Barnard Griffin in Richland and the dean of Washington winemakers with 37 harvests under his belt, said he never would have guessed this when he arrived in Washington in the mid-1970s.

“The conventional wisdom was that this was a great place for white wines,” he said. “Then we attempted to make ourselves the place for Merlot. We do lots of fun, interesting things with other varieties, but undeniably, Cab is the best.”

Griffin now crushes more Cabernet Sauvignon than any other red grape variety. Chardonnay still is his No. 1 grape, “but Cab is beginning to push up against it.”

Wade Wolfe, owner of Thurston Wolfe Winery in Prosser, arrived in Washington just a year after Griffin, and he said Cabernet Sauvignon is a good grape for Washington to hang its hat on.

“Cabernet is always king in red wine sales,” he said. “We’ve gone through phases where Merlot was the red grape for Washington, then Syrah. I think Cabernet has rightfully taken the lead there, both in volume and prestige. I consider it the best grape in Washington.”

Michaela Baltasar, communications director for the Washington State Wine Commission in Seattle, said Cabernet Sauvignon’s emergence as Washington’s No. 1 grape is good for the state.

“It’s no secret that Washington produces excellent Cabernet Sauvignon,” she told Great Northwest Wine. “These wines have received top scores and acclaim from critics for many years. The increased Cabernet Sauvignon tonnage is another way of illustrating this story – this grape variety does well here and is widely recognized for its quality, so it’s natural that more people are going to want to grow it.”

She was quick to add that Cabernet Sauvignon wasn’t the only grape to increase last year.

“That said, there still is no single variety that predominantly defines Washington. Though Cabernet Sauvignon tonnage increased by nearly 19 percent compared to 2012, almost all grape varieties in the state saw growth as well. This is an ever-evolving industry, and one of the great things about Washington is the potential for so many different types of wines.”

The tiny community of Alderdale in the Horse Heaven Hills is where much of Washington’s growth in Cabernet Sauvignon has occurred in the past five years. (Photo by Eric Degerman/Great Northwest Wine)

One of the main drivers in the growth of Cabernet Sauvignon in Washington has been the Horse Heaven Hills, where 4,291 acres are planted. A lot of vines that were planted in 2009 and 2010 were affected by the November 2010 freeze that damaged many vineyards in the area. These grapes are now finally mature enough to produce full crops, a fact that has driven the higher tonnage last fall.

Despite all this, Ste. Michelle Wine Estates – which uses two out of every three grapes grown in Washington – still doesn’t have enough red fruit. Earlier this winter, the Woodinville company said it will be producing a quarter-million cases of wine for its Two Vines label using grapes from Central California’s Lodi region because it doesn’t have enough Washington fruit to fill the demand.

Chardonnay and Riesling also saw significant increases in tonnage last fall, perhaps to the surprise of industry experts. Chardonnay was up 9.7 percent to 40,500 tons, and Riesling was just behind it at 40,200 tons, up 9.5 percent.

“I don’t know how to account for the Chardonnay,” Corliss said. “Riesling has had a pretty good expansion, and those vineyards are all fully mature and kicking into high yields.”

Last year, talk amid grape growers was that if the state is long on one variety, it’s Riesling, especially with Columbia Winery in Woodinville producing virtually no Riesling under E&J Gallo’s ownership. In the past, Columbia made about 100,000 cases of Riesling.

“We’re not expanding Riesling right now,” Corliss said. “We’re in good shape with what we have.” 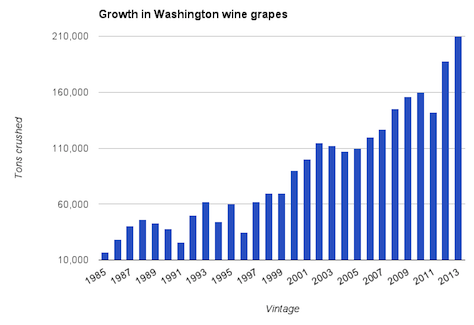 Todd Newhouse, owner of Upland Vineyard on Snipes Mountain near Sunnyside, also is chairman of the board of the Washington Association of Wine Grape Growers. He said the growth in Cabernet Sauvignon is what he expected to see.

“Riesling is flattening off, and Chardonnay isn’t growing much more,” he said. “When you talk to any large winery, Cabernet Sauvignon is the No. 1 grape they want planted.”

That surprised Wolfe, who said the Syrah he crushed last year might be his last.

“I’m seeing this from a small-winery perspective,” he said. “There’s growing interest in Cabernet Sauvignon and tepid interest in Syrah. I use more Syrah in blends than I’ve made into a varietal wine, so I don’t see a point in doing it anymore.”

Newhouse believes the growing interest in red blends probably is driving the increase in Syrah.

“I’d be willing to bet that 90 percent of that increase is going into blends,” he said.

Another big white variety for Washington is Pinot Gris, which saw a significant 25 percent growth from 2012 to 8,000 tons crushed. This likely keeps it ahead of Oregon, where Pinot Gris is the No. 1 white grape but tends to command prices up to twice as high as Washington because of the cost to farm the grape in the cool Willamette Valley.

The most expensive grape in Washington last year was Grenache, which sold for an average of $1,889 per ton. That pleased Newhouse, who grows the red Rhône variety. He said most Grenache goes to smaller wineries and tends to be harvested by hand, making it more expensive.

Overall, the price per ton for Washington wine grapes was at a record high of $1,110. Newhouse said the cost of planting a vineyard has nearly doubled in the past 10 years, so it was good to see a few more dollars going into growers’ pockets.

“It’s always good, especially when supply and demand are in balance,” he said.