Oregon wineries should plan for another warm vintage, scientist says

PORTLAND, Ore. — World-renowned research climatologist Greg Jones told the Oregon wine industry the forecast for weather conditions and the 2014 vintage is similar to what the Pacific Northwest experienced in 2012 and 2013.

Both were warmer than average, but if Oregon wineries and grape growers had their choice, they’d take 2012 hands down as they clearly recall the historic rains in late September 2013.

“A comment that I got from about 20 people was ‘September stunk, and October saved the day,’ Jones told the Oregon Wine Symposium last week in Portland.

It’s unlikely that the back end of a typhoon will reach the Pacific Northwest for a second straight year, but otherwise expect similar conditions and perhaps another relatively early start to vineyard harvesting, said the Southern Oregon University professor.

“We should look back at spring 2013 because I think this is close to what we’ll be seeing this year as well,” he said. “It was fairly dry throughout most of the western U.S., however parts of northern Oregon and Washington ended up being relatively wet in the spring, which really helped us out going into the growing season.” 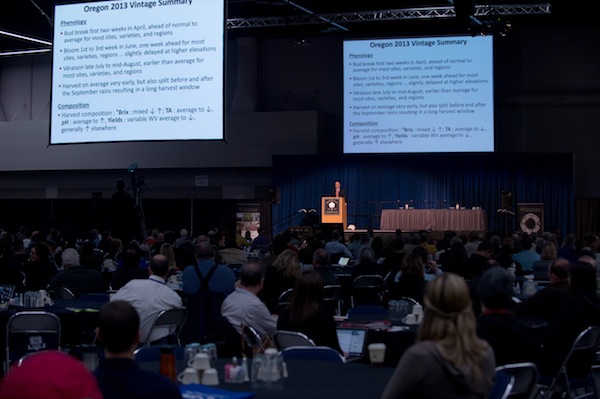 If not for the aftermath of Typhoon Pabuk — which Jones called “an extremely rare event” in the Northwest — last year would have broken several records.

“That came across and gave us quite a bit of rainfall in the latter part of September,” he said. “This ended up producing the wettest September on record for Washington and Oregon.”

As it was, Jones’ weather station in McMinnville reported temperatures over the course of the growing season to be 1.5 to 2 degrees Fahrenheit above normal. All four of his Oregon weather data centers were heading to record heat accumulations before the cooldown in late September through October.

Still, 2013 goes down for the fourth-highest heat accumulation and fourth-driest year in Oregon.

“So what’s in store? A slightly cooler-than-normal spring and near-normal to slightly below-normal precipitation for Oregon, Washington and Idaho,” he said. “The farther north you go, the more likely it’s going to be a wetter spring. Summer should be dry and warmer than average overall.”

Transition to El Niño expected to begin in fall

Harvest time in the Pacific Northwest could see the beginning of a transition away from the current La Nada, he said.

“Fall conditions are likely to be influenced by the projected shift to El Niño conditions. The issue is we really don’t know the onset of it,” he said. “It looks like a September-October-November thing. The timing of it is very important. El Niño conditions typically produce dry winters for the Pacific Northwest.”

As is his custom, Jones presented some general observations from enologists throughout the state about the growing season and the vintage. Bud break came the first two weeks in April, which was ahead of normal for most. Bloom burst was the first week in June — one week ahead of normal. Veraison was late July in some places to mid-August, earlier than average for most places.

“And it was the largest harvest window I’ve ever seen in Oregon,”  said Jones, who arrived in Oregon in 1997. “Many people said they harvested as early as the end of the first week in September and as late as the third or fourth week in October. Harvest was very early on average but was split across.”

There also were complications in some regions as a result of the late summer rains and unseasonably warm evenings.

“In terms of brix, in Southern Oregon they were average or above average,” Jones said. “Acid levels throughout the state were average to below average, and most people thought that was coming from increased respiration at night because of the high nighttime temperatures.”

Jones also referenced global climate change throughout his talk as California’s wine industry comes to grips with 2013 being its driest calendar year on record.

“Over the last 10 years, in the United States alone there have been more extreme records broken for temperatures and for precipitation — on both ends of the coin — than have been broken in the previous 40 years,” he said. “We’ve been in a much more variable climate in the last 10 years or so.”

To close out his presentation, Jones playfully cited another source for weather forecasting.

“If you don’t trust me, you can always count on the Farmers’ Almanac,” he said. “If you look at their timeline for western Oregon, from November 2013 to October 2014 they are showing it to be a relatively dry spring, a relatively warm spring, but the real problem is they are calling for rain in September again. I just wanted you to know that if it rains in September again, it’s their fault — not mine.”